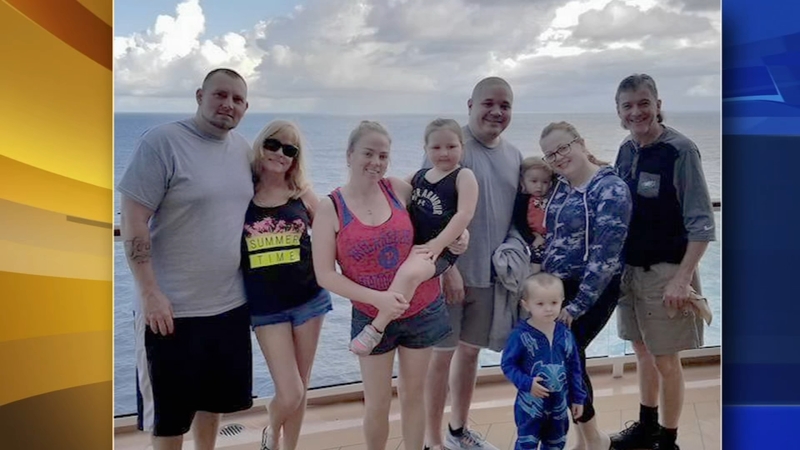 10 members of Philly family get sick on cruise ship

NORTHEAST PHILADELPHIA (WPVI) -- A local couple says their dream vacation became a norovirus nightmare when not one, not two, but ten members of their family came down with a debilitating illness.

What's worse: that couple was celebrating their honeymoon.

Those that fell ill include newlywed Ashley Morris, her husband, her two kids, her parents, nieces, and sister-in-law.

The illness hit after they returned yesterday from seven days on Royal Caribbean's "Anthem of the Seas."

Ashley says rumors of a spreading virus started circulating on day two of the cruise out of New Jersey and started to spread fast. Workers could be seen spraying the narrow hallways, but it was apparently spreading like wildfire.

What do you know about norovirus? Learn more here.

Ashley's brother, Mark, says his wife and two children are already down for the count, and he's convinced he is next.

He says he doesn't think the ship's managers took enough measures to stop the spread of the virus, which is not airborne but rather comes from personal touch with others or germs left on surfaces.

Ashley says to be compensated, they must jump more hoops.

Royal Caribbean issued the following statement in response to our story:

Anthem of Seas was on a 7-night Bahamas cruise, which departed Cape Liberty, New Jersey on Saturday, November 4. There were a total of 98 reported cases of gastrointestinal illness symptoms, which represents 1.9 percent of the 4,905 guests and crew onboard.

Those affected by the short-lived illness are being treated by the ship's doctors and responded well to over-the-counter medication, and guests were encouraged to ensure hand hygiene standards remain high at all times to prevent the spread of any illness during the remainder of the cruise.

There have been numerous reports of multiple strains of gastrointestinal illnesses in the community in Australia in recent months. Health experts recommend simple hand hygiene is the best defense against stomach viruses, which each year affect as many as 300 million people worldwide - only the common cold is more prevalent.