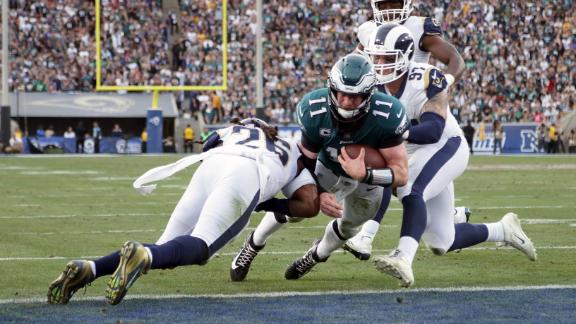 Manual testing revealed that the ACL was loose. In such cases, the likelihood of a tear is high, which is why the team fears that the ligament is torn.

Wentz was seen walking inside the locker room with a heavy, black brace on his left knee. He is scheduled to undergo an MRI tomorrow in Philadelphia.

Wentz exited the Eagles' 43-35 win againstLos Angeles Rams late in the third quarter Sunday and was ruled out.

Wentz addressed fans on Twitter after the win, which clinched the NFC East and a playoff sport for the Eagles.

He came up limping after absorbing multiple hits on a touchdown run that was negated by a holding penalty. Wentz stayed in the game for the remainder of the drive, which he capped with a fourth-down touchdown throw to Alshon Jeffery that gave the Eagles the lead.

Following the series, Wentz went to the trainers tent to be evaluated, and he was taken indoors a short time later.

Nick Foles immediately began practicing snaps with center Jason Kelce on the sideline in anticipation of going in.

"We got the win for him. We're going to move on and whatever happens, happens. Next man up mentality," Eagles safety Rodney McLeod said afterward. "That's been the story of us this entire season. We're not going to miss a beat at all and we're just going to keep this thing rolling."

Wentz passed for four touchdowns. He passed Sonny Jurgensen for the most touchdowns in a single season (33) in franchise history, a record that had stood since 1961.

"He was the first person greeting everyone in the locker room on the way in," Eagles safety Malcolm Jenkins said. "I don't know what to tell a man in that situation; I just told him I loved him as a teammate, loved him as a friend, obviously everyone is feeling for him."