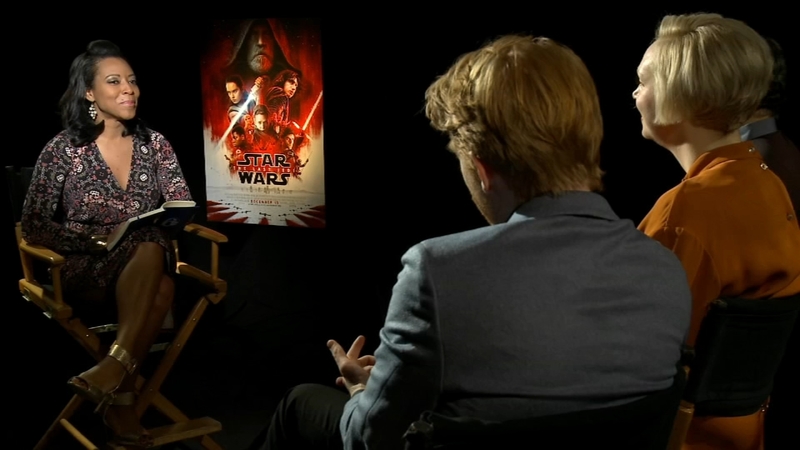 HOLLYWOOD (WPVI) -- Star Wars: The Last Jedi is now playing, and Star Wars wouldn't be Star Wars without epic battles between the good guys and the bad guys.

Earlier this week we talked to the heroes - now let's meet the villains!

Oddly it was all jokes and laughs during my interview with this trio responsible for total evil in The Last Jedi.

Andy Serkis, Gwendoline Christie and Domhnall Gleeson are all returning.

Serkis plays Snoke, the Supreme leader of the First Order.

And not the most handsome character.

"His mother loves him and at the end of the day, Sharrie, that's what matters," Serkis said.

Gleeson has the role of General Hux, and added even more sarcastic silliness to our conversation

"Should we expect you to be bumping heads more with Kylo Ren?" I asked.

"Not literally. That would be weird for an hour and a half," he said.

We will see more of Christie who plays Captain Phasma in her striking armor.

"You haven't conventionally seen women portrayed this way. Often it's about a woman's physicality and therefore a judgment process made on that. All of that is stripped away with Phasma," she said.

Droid BB-9E, who I got meet.. and he even said hi to the Delaware Valley!

Newcomer Kelly Marie Tran is getting her big break taking on the part of Rose. She was close to quitting the movie business when she got the call of her life.

"Are you pinching yourself?" I asked.

"Still! I have goosebumps," she said. "But if I can be any sort of example I will say that it's possible because I'm sitting here talking to you and I can't believe it."

"I was so moved by it as a fan and to get to be a part of the world is a kid's dream come true," Dern said.

Oscar Isaac, who's back as Poe, is a brave good guy who works under Admiral Holdo's command.

"Anyone who watches the movie will connect particularly with the feeling of dark times we're living in with all things happening in the world to have at a film that at its center is about hope," he said.

The other leading villain is Kylo Ren, played by actor Adam Driver. He uses the dark side of the force, although he is the son of Han Solo and Princes Leia.

And a major story line fans are burning to know more about is: What is the nature of the relationship between the key villain and the leading character Rey?