3 arrested during protest at Georgia Tech after vigil 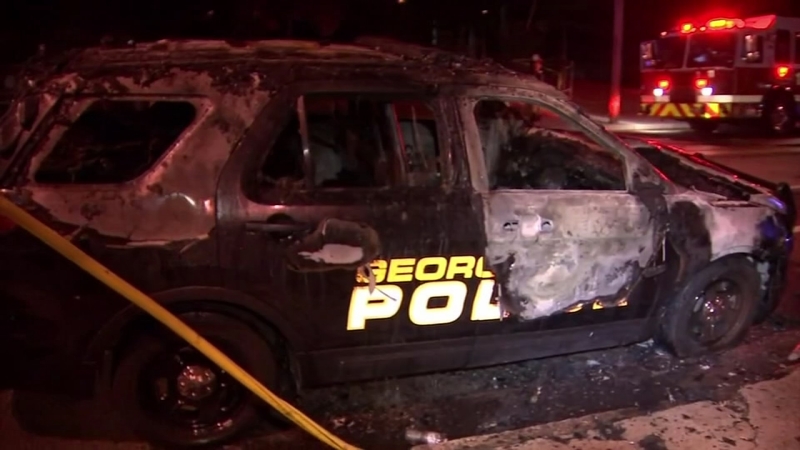 3 arrested during protest at Georgia Tech

ATLANTA -- Three people were arrested Monday night during a protest after a vigil for a Georgia Tech student who was fatally shot by campus police, a university spokesman said.

Police shot and killed Scout Schultz late Saturday night after the 21-year-old student called 911 to report an armed and possibly intoxicated suspicious person, the Georgia Bureau of Investigation has said.

Georgia Tech sent out alerts urging students to shelter indoors Monday night and lock doors and windows because of violent protests. Video posted on social media showed a police vehicle burning in the street and officers pinning people to the ground as onlookers shouted at them.

After a peaceful vigil, about 50 protesters marched to the campus police department, university spokesman Lance Wallace said. A police vehicle was damaged and two officers suffered minor injuries, with one taken to a hospital for treatment.

Police restored order relatively quickly, and three people were arrested and charged with inciting a riot and battery of an officer, Wallace said.

"(W)e ask that those who wish to protest Scout's death do so peacefully. Answering violence with violence is not the answer," the statement said. "Our goal is to work diligently to make positive change at Georgia Tech in an effort to ensure a safer campus for all students."

The GBI has said an officer responding to a 911 call about 11:17 p.m. Saturday shot Schultz as the student advanced on officers with a knife and refused commands to put down the knife. Stewart said Monday that the GBI confirmed to him that Schultz was holding a multipurpose tool and that the knife blade was not out.

Schultz was the one who called 911, GBI spokeswoman Nelly Miles said in an emailed statement Monday.

"In the call, Shultz describes the person as a white male, with long blonde hair, white T-shirt and blue jeans who is possibly intoxicated, holding a knife and possibly armed with a gun on his hip," Miles said, adding that three suicide notes were found in Schultz's dorm room.

Investigators recovered a multi-purpose tool at the scene but didn't find any guns, Miles said.

Flanked by Schultz's parents Monday morning, Stewart said the officer who shot Schultz overreacted. Schultz was having a breakdown and was suicidal but if the officer had used non-lethal force rather than shooting, Schultz could have received treatment and gotten better, Stewart said.

"The mentally ill are looking for a way out when they're having a full breakdown, and there's no way you should be able to use a police officer to take your life when that person isn't threatened," Stewart said.

Stewart says he plans to sue over the shooting.

Authorities have not identified the officer who shot Schultz. Georgia Tech on Monday refused to release personnel or disciplinary reports involving the officers, saying such information is exempt from Georgia's open records law.

Schultz was president of Pride Alliance at Georgia Tech. The fourth-year computer engineering student used the name Scout, rather than the given name Scott, and preferred the pronouns "they" and "them" rather than "he" or "him."

William Schultz told reporters Monday that his child had a 3.9 GPA and was on track to graduate early in December.

Lynne Schultz told the Journal-Constitution over the weekend that her oldest child had struggled with depression and attempted suicide two years ago using a belt as a noose.

The GBI, through its Crisis Intervention Team, has trained about 10,000 local, state and federal law enforcement officers since it began in 2004, the Atlanta newspaper reported. Some agencies require that training while others don't.

It wasn't immediately clear whether the officers who responded Saturday had undergone such training.

Stewart, the family's lawyer, said the university has failed in not providing its officers with stun guns. He also said university police officers "should have the highest training in dealing with people having mental or emotional breakdowns and issues."

Referring to a video of the incident, Stewart says the main officer was doing a "phenomenal job" handling the situation - retreating, trying to deescalate and putting a barrier between himself and Schultz - and that other officers also appeared to be providing appropriate backup. But one officer behaved inappropriately by firing on Schultz when there was no immediate danger to any of the officers, Stewart said.

William Schultz said the encounter shouldn't have ended in his child's death.

If given a chance to talk to the officer, he told reporters, he just has one question: "Why did you have to shoot? That's the question. I mean, that's the only question that matters right now. Why did you kill my son?"