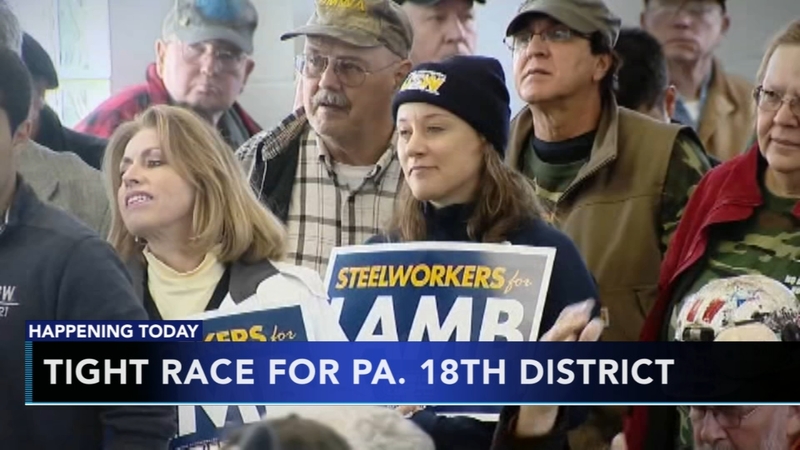 CARNEGIE, Pa. -- Shadowed by the Trump presidency and the potential impact of a special election in a midterm year, voters in a western Pennsylvania congressional district find themselves on an unlikely national stage.

Ostensibly, they are choosing Tuesday between Republican Rick Saccone and Democrat Conor Lamb to replace Tim Murphy, who resigned last fall amid a sex scandal.

But the outcome promises to reverberate well beyond the suburbs, small towns and rural swaths that surround Pittsburgh in a region known for its once-dominant steel and coal concerns.

A Lamb victory would hearten Democrats as they look to reclaim a House majority in November, while shaking Republican self-assurance that their new tax law is an omnipotent defense of whatever weakness comes with defending an all-GOP government helmed by President Donald Trump.

Those possibilities are enough to leave national Republicans already offering explanations for what would be an embarrassing defeat.

The president won the district by 20 percentage points just 16 months ago, when Democrats didn't even field a candidate against Murphy in a district gerrymandered by state GOP lawmakers. When the eight-term congressman vacated the seat in October, there came no chest-puffing from national Democrats plotting how to reclaim the 24 additional seats they need to take over the House.

Now, polls suggest Lamb well-positioned for an upset, despite Saccone's urging to a GOP-leaning electorate that their choice is about "making America great again," just as the president says.

"Everywhere I get it's 100-to-1 for Rick Saccone," the candidate said Monday during one of his final campaign stops, with Donald Trump Jr. flanking him two days after the president himself made his second campaign visit on Saccone's behalf.

The 60-year-old Air Force veteran turned state lawmaker and college instructor enjoys enthusiastic backing from social conservatives who've anchored his state career, and he's perhaps at his most animated when he touts his opposition to abortion rights.

Yet Saccone struggled to raise money and stir the same passions that helped Trump sweep the industrial Midwest on his way to the White House. The consistent fundraising deficit has left him with limited resources to air the message he delivers one-on-one: His four decades of experience in the private sector, international business and now the legislature make voters' choice a no-brainer.

Meanwhile, Democrats' opted for a 33-year-old Marine veteran and former federal prosecutor who hails from a well-established political family in Allegheny County.

Lamb took to the role, positioning himself as a centrist even as national Republican forces descended on the district to fill airwaves and social media with depictions of the first-time candidate as little more than a lemming for Nancy Pelosi - the California Democrat, House minority leader and GOP punching bag.

Seemingly embracing the attacks, Lamb cut an ad calling it all "a big lie" since he'd already declared he wouldn't support Pelosi as floor leader, much less a return to the speaker's rostrum. He's added his opposition to major new gun restrictions - though he backs expanded background checks - and declared himself personally opposed to abortion, despite his support for its legality.

Lamb mostly avoids Trump, who remains generally popular in the district, even if slightly diminished from his Election Day dominance.

He adds those tacks to Democratic Party orthodoxy on the new GOP tax law, hammering it as a giveaway to corporations at the certain future expense of Social Security, Medicare and the nation's fiscal security. And he embraces unions, highlighting Saccone's anti-labor record at the statehouse - a noticeable deviation from Murphy's status as a union-friendly Republican. The AFL-CIO counts 87,000 votes from union households - around a fifth of the electorate.

Lamb's campaign has inspired Democrats' core supporters. "I was really down after the presidential election, but Conor has me totally enthusiastic again," said Patricia Bancroft, 62, as she took a break from working the phones at a Lamb campaign office Monday afternoon.

Over the weekend, Lamb celebrated an endorsement from the United Mine Workers, a union that sat out the 2016 election rather than endorse Trump or Hillary Clinton.

The Democrat's efforts also have been effective enough to frustrate and even spook Republicans.

Dan Greene, a GOP committeeman in Westmoreland County, groused Monday about Lamb distinguishing himself from his party on guns and, less so, on abortion. "What has he done to prove that?" Greene questioned. "Rick Saccone has walked the walk."

The Congressional Leadership Fund, a political action committee aligned with House Speaker Paul Ryan, at one point deviated from its Pelosi-bashing scripts to send Democratic voters mailers praising Lamb for opposing new gun restrictions. It was part of the fund's $3.5 million investment in the race, about a third of the total that outside GOP forces have injected.

Trump, begrudgingly admiring of Lamb's tactics, added his own warning Saturday. "The people of Pittsburgh," he declared, "cannot be conned by this guy Lamb."

As for Saccone, he plans to be a congressman, not a punchline.