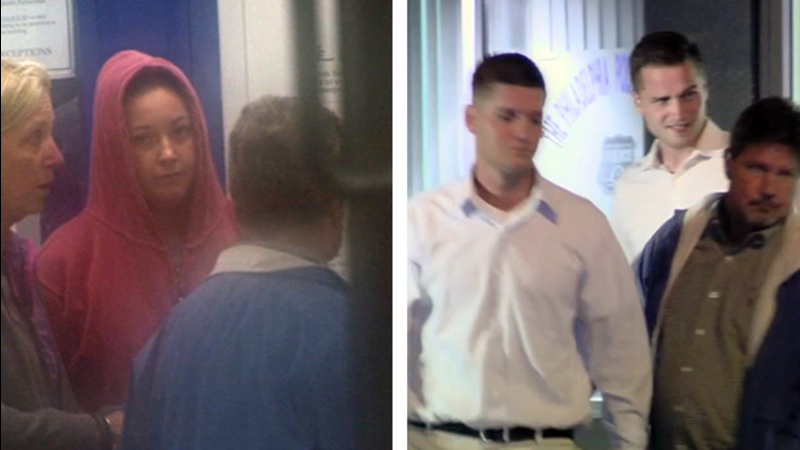 PHILADELPHIA -- All three suspects accused of attacking of a gay couple in Center City Philadelphia earlier this month were arraigned overnight.

Action News was there as all three left Philadelphia Police Central Detectives in Spring Garden.

All three are charged with aggravated assault, criminal conspiracy, simple assault and recklessly endangering another person.

They were charged in connection with the September 11th attack on two gay men in the 1600 block of Chancellor Street.

Williams' attorney Fortunato Perri Jr. said Wednesday after Williams surrendered to police that the case was not related to anyone's sexual orientation, but was instead a "mutual confrontation" in which his client "was not the aggressor."

Meanwhile, because of the charges, Knott has been suspended from her job as an emergency room tech for Abington Health's Lansdale Hospital, where she has worked since 2011.

In addition, Abington Health said it was investigating potential privacy violations involving Knott. This comes after reports that Knott posted pictures of patient x-rays to her Twitter account.

"Abington Health takes patient privacy and confidentiality very seriously and is fully investigating this matter," the hospital said in a statement.

He was a lieutenant in Abington Township when his daughter tweeted about special treatment from her dad.

One tweet claimed she went on a police raid and kicked down a door in December of 2012.

Abington Police Chief Bill Kelly says the young woman was on a "legitimate ride along" but the rest was false. As for the other tweets, they also appear not be true.

"There's no allegation against any member of this police department that goes un-researched, regardless whether it's anonymous or how it comes in, we research it because we value the reputation of our police department," said Chief Kelly.

Chief Kelly said he spoke with other officers and even Knott's father who he describes as an exemplary officer whom he's known for nearly 30 years.

As for the investigation into the Center City attack, Knott's attorney, Louis Busico, has denied that the dispute was motivated by anti-gay bias.

"She played no role in this other than going out to dinner with friends the night this happened," Busico said outside Central Detectives on Wednesday. "We don't deny that there was a gentleman who was assaulted. We don't deny that this gentleman was injured. But I unequivocally deny that my client did anything to hurt this man; she wouldn't hurt anybody."

The incident in question unfolded at 10:45 p.m. on Thursday, September 11th.

Investigators say the victims, a 28-year-old man and a 27-year-old man, were in the 1600 block of Chancellor Street when police say they were approached by a group of 'unknown males and females.'

The group of 10 to 12 people approached and, according to police, 'made disparaging remarks about their sexual orientation.'

That led to an attack, police say, with some of the suspects holding the victims while others punched them.

"This vicious attack shocked the entire country. An assault on people because of their sexual orientation has no place in Philadelphia," DA Seth Williams said in a statement.

The two victims suffered serious facial injuries. They claim they were targeted for being homosexual and savagely beaten.

Police say there were originally 10 to 12 suspects in the attack but, in the end, only three have been charged.

Investigators say the reason the other suspects have not been charged will come out in court.

As previously reported, none of the suspects can be charged with a hate crime under Pennsylvania law.

On Tuesday, gay rights supporters turned out in force in Harrisburg to push for a change in Pennsylvania's hate crime law.

"Three people's lives are about to change drastically and the victims are asking that everybody just keep their language respectful and not hateful," the victims' friend Caryn Kunkle.

Kunkle says before the charges the victims spent more time Tuesday with Central Detectives and prosecutors.

"It's very emotionally taxing on them. They're still reliving it all. It's tough," Kunkle said.

Because of the large group of potential suspects who were out on the town, police say the investigation took time.

"Well, it's a situation of which the attorneys made communication with us to bring the clients from the first place, as a courtesy, Central Detectives have reached out to the attorneys making it an easy process for them to come in as opposed to using additional resources," Stanford said.

Last week, the Archdiocese of Philadelphia released a statement acknowledging that several former students of Archbishop Wood High School in Warminster, many 2007 graduates, were suspected in the attack.

One of the persons of interest questioned last week was an assistant basketball coach at Archbishop Wood High School. He resigned because of his alleged involvement, but he is not one of the three involved in the crime.