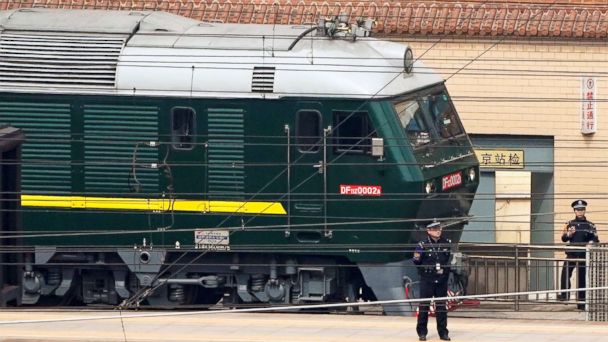 BEIJING -- Even as an armored North Korean train pulled away from the Beijing railway station Tuesday afternoon, almost exactly 24 hours after it arrived, the mystery remained in the Chinese capital about whether North Korean leader Kim Jong Un had made a surprise visit to China.

At the daily Chinese Foreign Ministry press briefing Tuesday, unusually packed to the brim with journalists, spokeswoman Hua Chunying continued to claim that the agency did not have any information about the high level delegation that zipped around Beijing in a large convoy or the reason for increased security measures in Beijing and the northern city of Dandong that borders North Korea.

The ministry confirmed by Beijing or Pyongyang that if Kim Jong Un was indeed part of the delegation, it would mark the first foreign trip Kim since he officially became leader of the reclusive state after his father Kim Jong Il's death in December 2011.

In fact, the visit followed the hallmarks of the elder Kim's previous visits to China, the last of which was in May 2011. Everything followed the old playbook, from the increased security in Dandong days before the Kims' train crossed the border to an overnight stay at Beijing's Diaoyutai State Guesthouse.

Details of those visits were never confirmed by either country until Kim Jong Il was safely back in North Korea. It appears the world will not know the details of this mysterious visit, either, until the delegation is back over the border.

The relationship between China and North Korea has grown tense in recent years amid Kim Jong Un's relentless nuclear ambitions and repeated missile tests. Since Kim and Chinese President Xi became leaders of their countries, the two have never met.

Kim is soon scheduled to hold a summit with South Korean President Moon Jae-in in April and a possible a face to face meeting with President Trump in May. Xi and China appear to have been left out of the process.

This visit could be seen by some as the beginning of a thaw.

The North Korean delegation spent three hours in the Great Hall of the People after arriving in Beijing Monday afternoon. The cavernous building is where high level Chinese officials host meetings with foreign delegations.