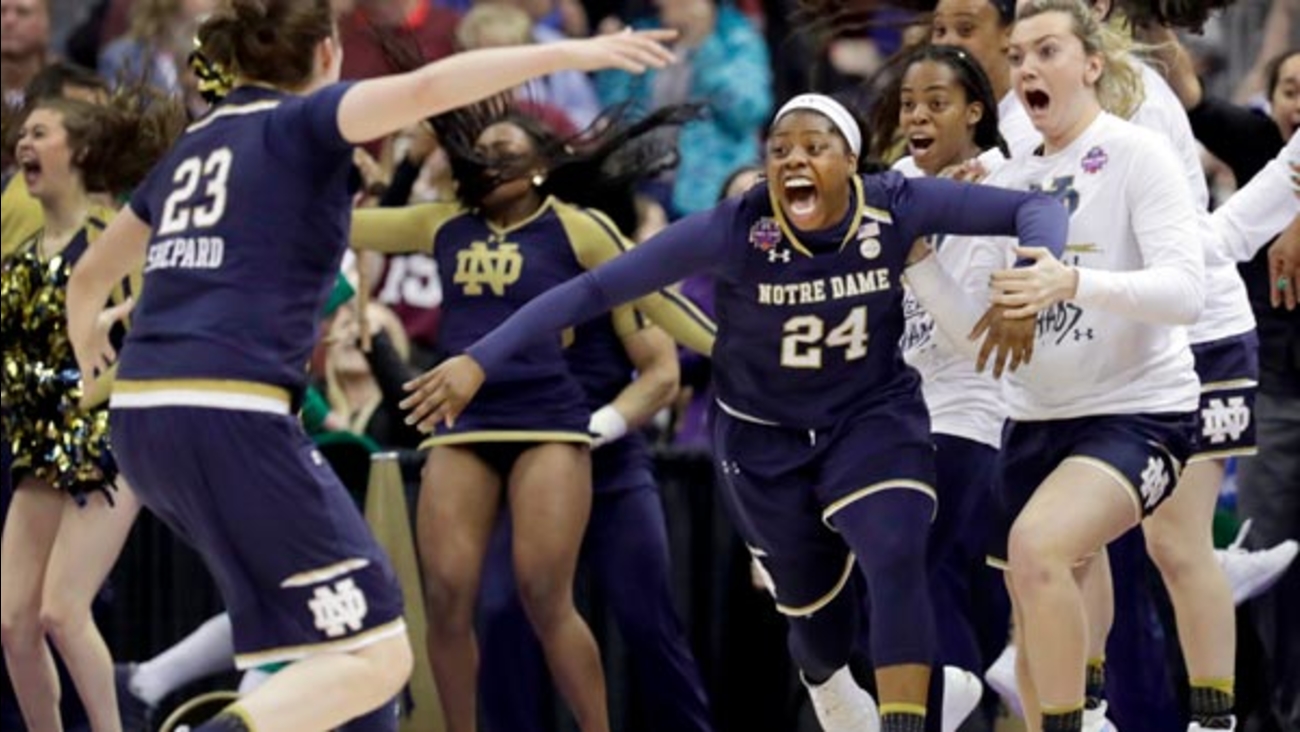 Ogunbowale floated in a 3-pointer from the corner with 0.1 seconds left, lifting Notre Dame to its second women's basketball title with a thrilling 61-58 comeback victory over Mississippi State in the NCAA championship game on Sunday night.

It was the second straight game that the junior guard hit a shot in the final second to carry the Irish. Her jumper with one second remaining in overtime knocked off previously unbeaten UConn in the semifinals Friday.

With this game tied, Ogunbowale took the inbounds pass from Jackie Young, dribbled twice toward the corner and, closely guarded, lofted home an off-balance 3 from in front of the Notre Dame bench, nearly the same angle as her shot that beat the Huskies.

"It just felt right," said Ogunbowale, who scored 16 of her 18 points in the second half. "I practice late-game all the time. I just ran to Jackie and said, 'Throw it to me, throw it to me.'"

Ogunbowale earned most outstanding player honors for the tournament and also received a congratulatory tweet from Kobe Bryant, who took in the semifinal win over UConn.

All the Irish players could celebrate after pulling off the biggest comeback in title game history. They rallied from a 15-point deficit in the third quarter and were down five in the final 1:58. Marina Mabrey hit a 3-pointer from the wing and Young had a shot in the lane to tie it.

"It's Easter Sunday, and all the Catholics were praying for us," said coach Muffet McGraw, who was wearing floral shoes in honor of the holiday.

When the final buzzer sounded, a wild celebration started with the Irish faithful who were part of the sellout crowd. McGraw's team had fallen short four times in seven years in the title game, losing in 2011, 2012, 2014 and 2015. Many of the Notre Dame alums who were on teams that had fallen just short of winning a title were there to enjoy it, including Natalie Achonwa, Natalie Novosel and Becca Bruszewki

This version of McGraw's squad refused to lose, and the run was even more improbable because the Irish lost four players over the season to ACL injuries.

Tied as the clock ran down, Mississippi State star Teaira McCowan missed a layup with 27.8 seconds left, and both teams turned the ball over in a wild sequence. McCowan fouled out of the game stopping an Irish fast break after consecutive turnovers and that set up the final 3 seconds.

After Ogunbowale's clutch shot, the officials huddled and put one-tenth of a second on the clock. A couple of Mississippi State players had already headed for the locker room, while Notre Dame players celebrated.

The court was cleared, and Mississippi State tossed a futile inbounds pass into the lane as the buzzer sounded.

It was the second year in a row that Mississippi State (37-2) fell short in the title game. It lost to South Carolina last year after ending UConn's record 111-game winning streak.

For the fourth straight NCAA game, the Irish found themselves trailing at the half. They were down 40-25 early in the third quarter before finally getting on track offensively. The Irish closed the period with a 16-1 run to tie the game at 41 heading to the final quarter.

The Irish were buoyed by severe foul trouble by Mississippi State that saw all five of its starters with three fouls in the third quarter.

It didn't look good for the Irish in the first half. After getting out to a 12-6 lead with 3:41 left in the opening quarter, Mississippi State outscored Notre Dame 24-5 the remainder of the half. The Irish went just over 8 minutes without a point, missing seven shots and committing five turnovers during the game-changing run.

At the same time, the 6-foot-7 McCowan and Victoria Vivians were powering the Bulldogs. McCowan got the burst going with five straight points and Vivians capped it with the final six points to give the Bulldogs a 30-17 lead at the half.

Vivians finished with 21 points and McCowan 18 to go along with 17 rebounds to lead the Bulldogs.

The Irish had just three points in the second quarter, setting an NCAA Tournament record for the fewest points in a period. That was five less than the previous mark for futility set by Syracuse in 2016 against UConn.

It didn't matter in the end as Notre Dame found a way to rally, just as they had done all season.

"This team is relentlessly driven," said Jessica Shepard, who scored 19 points to lead the Irish. "We've been down multiple times this year, but nobody stops us."