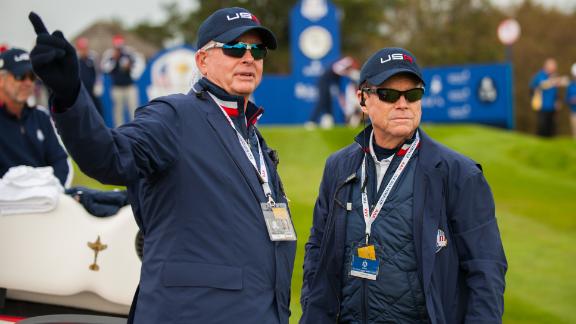 The PGA of America wants to take a closer look at its Ryder Cup failures by creating a task force that includes Tiger Woods and Phil Mickelson, along with three past captains of losing American teams.

The co-chairs are PGA chief executive Pete Bevacqua and Derek Sprague, next in line to be president of the PGA of America.

The goal of the task force is to examine all aspects of the Ryder Cup, including selections of captains and players as well as how the week of the competition would play out.

"This is a great step by the PGA to accomplish what we all want -- to win the Ryder Cup," Woods said in a statement issued by the PGA.

The past captains on the committee are Davis Love III (2012), Tom Lehman (2006) and Raymond Floyd (1989). Mickelson and Woods are joined by Steve Stricker, Jim Furyk and Rickie Fowler.

Woods has played on only one winning team, in 1999. Mickelson and Furyk have played on two winning teams. Stricker played in his first Ryder Cup in 2008 and was an assistant captain this year at Gleneagles. Fowler has not won a match in his two Ryder Cup appearances.

The other PGA of America official on the task force is Paul Levy, who is the secretary of the organization.

Paul Azinger and Ben Crenshaw, the only U.S. captains to win in the past 20 years, are not on the task force.

Azinger said Monday that he was approached by the PGA of America about being part of the panel that will evaluate everything related to the Ryder Cup, but he feels it's too soon to make a commitment.

"I'm just not ready to sit down and jump on a task force," Azinger said. "I have a scheduled meeting with the PGA of America in early November and I just think it's too soon for me to commit to jumping on a task force."

Azinger declined to discuss the subject of next month's meeting, although he has not ruled out returning to the role of captain again, if asked.

The U.S. has lost six of the past seven Ryder Cups, including a 16-11 defeat to Europe two weeks ago in Scotland. Azinger is the only winning U.S. captain since 1999, leading the Americans to victory in 2008 at Valhalla in Louisville.

"Nobody here was in [on] any decision," Mickelson said with his 11 teammates sitting beside him.

"Unfortunately, we have strayed from a winning formula in 2008 for the last three Ryder Cups, and we need to consider maybe getting back to that formula that helped us play our best."

Overlooked in the reaction to the latest American loss was the strength of the European team, which had four of the top five players in the world when the teams were set. Europe had three of the four major champions in Rory McIlroy (British Open, PGA Championship) and Martin Kaymer (U.S. Open).

"I see the negative connotations to it taking away from our victory, but I see the positive side that they'll have to really have an in-depth look to what they are doing wrong, and try to bring together a recipe that connects," Graeme McDowell said from the Volvo World Match Play Championship in England.

This Ryder Cup featured an unusual spate of second-guessing even before the match. Watson selected Webb Simpson with his final captain's pick, overlooking Chris Kirk, who had just won a FedEx Cup playoff event. Billy Horschel went on to win the next two playoff events after the wild-card selections were announced.

Simpson played only two matches at Gleneagles. Mickelson, with his U.S.-record 10 appearances, was benched all day Saturday.

The PGA of America did not reveal a timetable for when the task force would meet or even what would come out of it. The next captain will not be selected until next year -- it typically is announced at the PGA annual meeting in November.

Bob Harig of ESPN.com and The Associated Press contributed to this report.