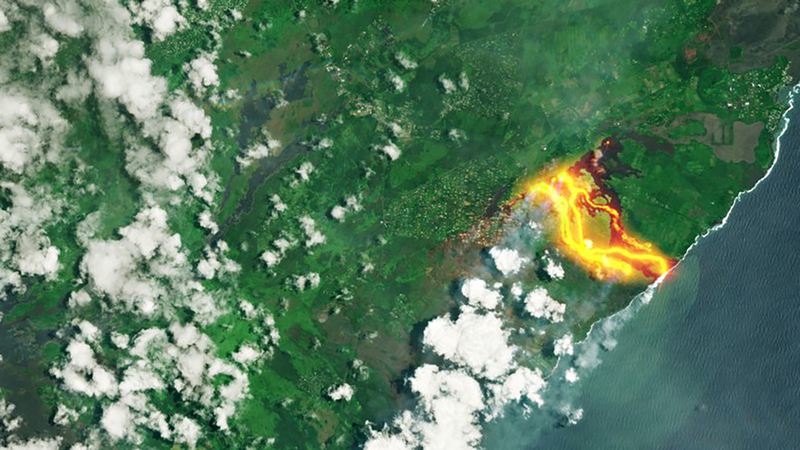 Lava flows from Hawaii's Kilauea volcano can be seen from space, according to imagery from two different space agencies.

The European Space Agency released a photograph from its Sentinel-2 satellite showing the bright orange lava, which is starkly visible against the rest of the green Hawaiian landscape.

#Kilauea lava channels are clearly visible in this #Sentinel2 B image of the #Hawaii volcano from 23 May (crop and full image). Follow @USGSVolcanoes for updates. pic.twitter.com/ZSCeL81xEB

NASA's Earth Observatory also shared a nighttime view of the lava flows in the form of a false-color view of the molten rock taken by the Operational Land Imager on Landsat 8. NASA's shot, also from May 23, was taken amid cloud cover in the region; the lava pictured is almost a pastel orange, while purple regions surrounding the lava are actually clouds being lit from below.

Three weeks after the 1st of more than 20 new volcanic fissures began spilling fresh lava from the Kilauea volcano in Hawaii, several still remain active. One of our @NASAEarth-observing satellites captured this nighttime, false-color image on May 23: https://t.co/G74MJs7Zqd pic.twitter.com/85n8t0y0rp