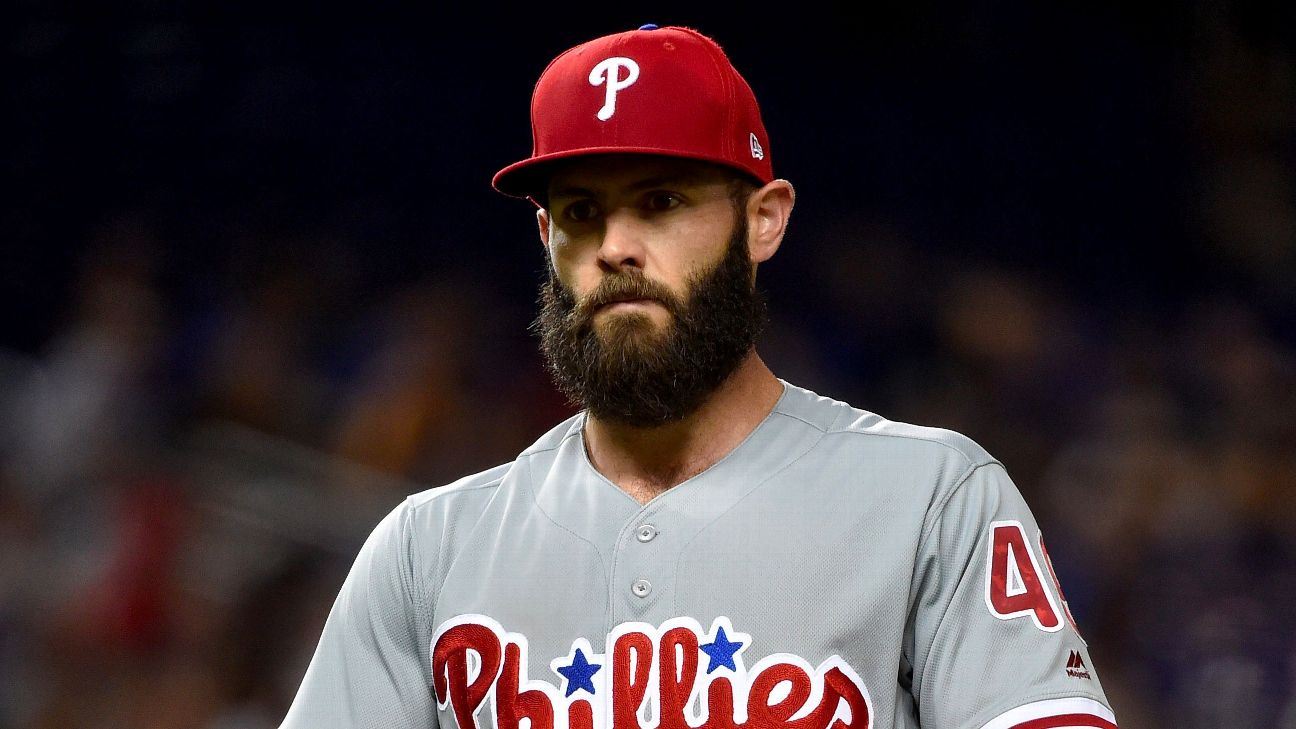 CHICAGO -- The rise of the Chicago Cubs can be traced directly back to the rise of one of their former star players, according to many within the team. As Philadelphia Phillies right-handerJake Arrieta returns to Wrigley Field this week, nostalgia will be in the air. Arrieta's ascension in 2015 -- on his way to a Cy Young Award -- matched the Cubs' rise, which led to a World Series title the following season, their first in 108 years.

Arrieta's return will undoubtedly be treated with the pomp and circumstance it deserves.

"Solid like a rock," Arrieta's former manager, Joe Maddon, said over the weekend in New York. "He was that. He was highly accountable, uniquely conditioned and had cartoonish stuff."

Arrieta never lacked for confidence, and he backed it up on the field after a 2013 trade from Baltimore for pitcher Scott Feldman and catcher Steve Clevenger changed everything. By the next year, he was beginning to make a name for himself. Then came 2015. It was a magical season. He went 22-6 with a 1.77 ERA, but he didn't make the All-Star team. Most of the damage came after the All-Star break, in a glorious run for him and for the Cubs. Arrieta posted a 0.75 ERA, the lowest second-half ERA (with a minimum of 10 starts) since 1933, the first year an All-Star Game was played. Meanwhile, the team took off, grabbing a wild-card spot with an unexpected 97-win season.

"That was one of the most impressive runs I've ever gotten to watch," pitcher Kyle Hendricks said. "When he took the ball every fifth day, you just figured CG [complete game]/shutout. Every time you expected to go nine and maybe give up one. It was unbelievable, the level he was pitching at."

None of that success led to a new contract with the Cubs. Arrieta tested free agency -- via agent Scott Boras -- and signed a three-year, $75 million deal with the Phillies, but only very late this past offseason. The Cubs signed Yu Darvish.

"He [Arrieta] is a true No.1 pitcher," Boras said via text. "He wins the biggest games, is a true leader and makes other members of the staff better. One of the game's best investments."

Boras is literally paid to say that, of course, but his sentiments aren't wrong. Arrieta threw a no-hitter on Sunday Night Baseball in 2015, sealing his Cy Young candidacy. He won the wild-card game in Pittsburgh that season in such a hostile atmosphere that many say it was unmatched during this Cubs run. Then came Arrieta's big wins in 2016, including facing elimination in Game 6 of the World Series. Earlier that season, he threw his second no-hitter.

"I was thinking about that the other day in Pittsburgh," Maddon said. "Having the privilege of having managed him has made me better."

It made the Cubs better too. Arrieta's bravado rubbed off and is missed in the Cubs' clubhouse.

"It would have been cool to have him on the mound [this week] at Wrigley pitching for the other side," Arrieta's friend Tommy La Stella said. "He meant so much to the fan base and organization, I'm sure everyone will love seeing him."

"Just don't tell him that," he quipped.

There are stories of players being good teammates in every clubhouse, but Arrieta was indeed unique, as he made his rounds around the whole locker room.

"He was rehabbing coming back from an injury in the minors [in 2014]," Hendricks said. "I was able to meet him, but then when I got called up, from day one, he took me under his wing. He was unbelievable ... He did that with everyone. He was that guy that tried to connect and make everyone else feel special."

That's why so many former teammates followed his offseason saga with interest, hoping that the longer he was available, the more likely it was that he might sign with the Cubs. It didn't happen.

"It was very tough, I'm sure," Ben Zobrist said. "Just kind of waiting around ... Before Yu [Darvish] signed, I thought there was a possibility he would come back, but after Yu signed, I didn't think so, obviously."

So far, Darvish has not made fans forget about Arrieta -- not that they ever will. There will be a nice tribute to him from the organization, and he'll get a standing ovation or two this week when he shows himself on the field. He deserves every bit of it. Without Arrieta in a Cubs uniform -- acquired for very little -- the team would never have reached the heights that it has.

"That's 'Snake' [Arrieta's nickname] right there," reliever Pedro Strop said. "I don't know what it's going to look like seeing him on a different team. A lot of good things to remember."

Zobrist added: "On the field, he's a special talent. The kind of presence he has on the mound is special. He was an absolute key for us to win the World Series in 2016."