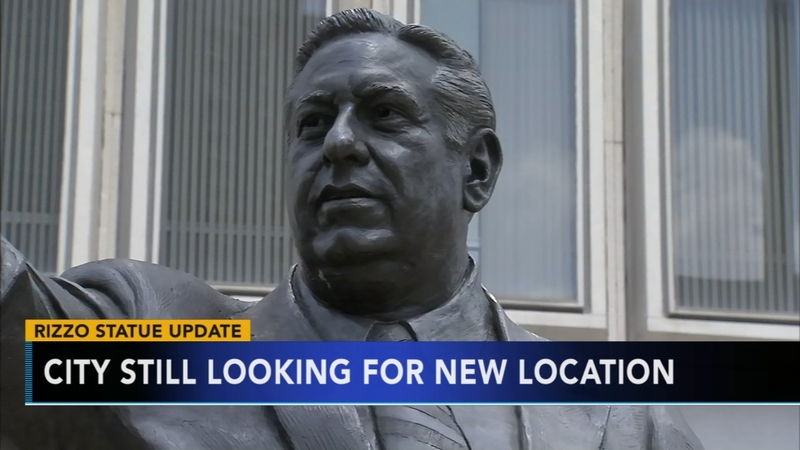 PHILADELPHIA (WPVI) -- The planned relocation of a statue of the late Philadelphia Mayor Frank Rizzo, a polarizing figure in the city's history, has been put on hold for at least two more years.

Mayor Jim Kenney said it would cost the city $200,000 to take down the 10-foot statue and store it until it could be moved, adding its relocation is not a priority for him.

"Of all the issues on my scale of important things to do, this is not even in the top 100," Kenney told philly.com on Thursday. The mayor said on WHYY that "with all the things I'm dealing with - from poverty to opioid abuse to schools to education issues - this is the last on my list."

Those who want the statue to stay put remember him as devoted public servant. His detractors say he led a police force that brutalized minorities. After months of public debate, Philadelphia officials announced last fall they would remove the iconic statue from its prominent downtown location in the shadow of City Hall.

The statue, a towering bronze sculpture depicting a waving Rizzo descending the plaza steps of a government building, was donated to the city and unveiled in 1999. City officials took public comment on the issue and received thousands of suggestions on what to do with the statue.

Word of the delay brought a swift backlash online, with Rizzo's critics excoriating the current mayor as a "coward" and suggesting politics was at play. The delay will push the move beyond Kenney's re-election campaign next year. Kenney denied his re-election played a role in the decision.

Rizzo's critics, many of them people of color, recall his approach to policing and governing as corrupt and racist. The South Philadelphia native served as mayor from 1972 to 1980 and is remembered by supporters as a devoted, outspoken public servant who championed the city.

Rizzo became police commissioner in 1967, memorably responding to a disturbance at a housing project wearing a tuxedo with a nightstick tucked into his cummerbund. He served two terms as mayor as a Democrat before switching to the GOP.

His four-year stint as commissioner was marked by praise for crime-fighting and criticism for rights infringement and was punctuated by some confrontations with African-Americans. In 1967, Rizzo and the police confronted a few hundred black students protesting outside the Board of Education Building. Officers clubbed some of the students after a few climbed atop cars. In 1970, two groups affiliated with the Black Panthers were raided and strip-searched on the sidewalk.

Yet he's also credited with hiring large numbers of African-American officers and promoting several black officers during his stint as commissioner.

Rizzo's son, former City Councilman Frank Rizzo Jr., said the statue should stay where it is.

"There's going to be a fight," he said Thursday.