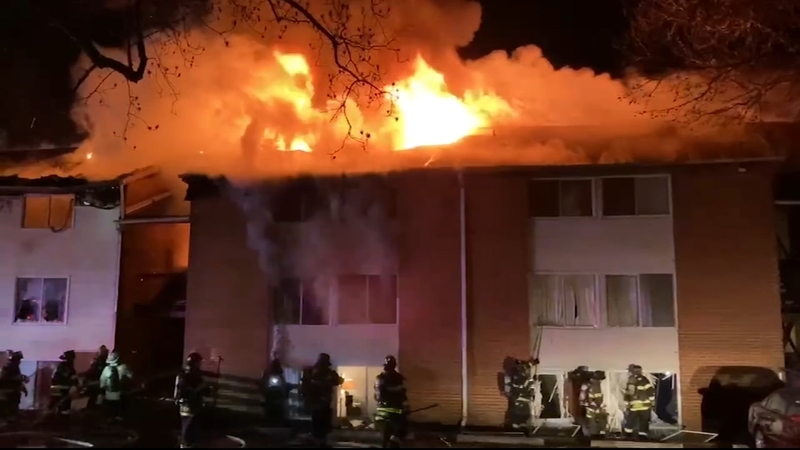 CLAYMONT, Delaware (WPVI) -- At least 40 people were displaced after a two-alarm fire tore through an apartment complex in Claymont, Delaware Sunday morning and destroyed 18 units.

No injuries have been reported, but the damage is estimated to be over $1-million.

Neighbors say they woke up to someone pounding on their door screaming "fire."

Many of them lost everything as the fire raged through buildings and burned down the roof.

"Somebody was outside screaming, 'It's a fire! Wake up, wake up. It's a fire," said Dominique Wilson, who lives with her family in one of first floor apartments.

Wilson says her family has no idea if anything they own can be saved.

"I feel lost. I never experienced anything like this before. I'm just happy me and my family made it out safe," Wilson said.

Firefighters battle a 2-alarm fire at an apartment complex in Claymont, Delaware

Fire crews in Claymont called in backup and dozens of trucks from Pennsylvania and Delaware responded.

The chief says 54 firefighters dumped water on the flames; it took crews more than an hour to control the fire.

Everyone who lives in the 18 apartments damaged made it out safely too, but some say they need help. The Red Cross has been called in to assist.

"I thank God for everything. None of us got hurt. Everyone's fine. And that's the only thing I can look at right now, that we made it out of there," Hull said.