Trump boasts of America's might, draws headshakes at UN 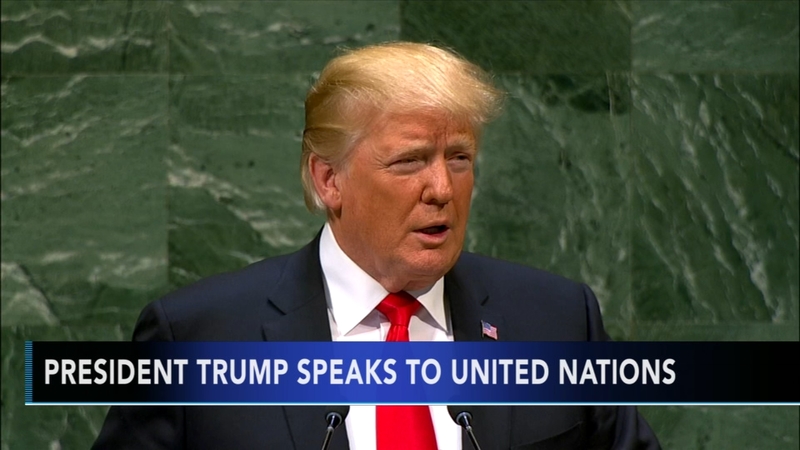 UNITED NATIONS -- President Donald Trump delivered a sharp rebuke of multinational authority at the United Nations on Tuesday, drawing headshakes and even laughter from fellow world leaders as he boasted of America's economic and military might.

Speaking in triumphal terms, Trump approached the address as an annual report to the world on his country's progress since his inauguration. He crowed that in "less than two years, my administration has accomplished more than almost any administration in the history of our country."

Rather than applaud or indicate they were impressed, the audience began to chuckle and some broke into outright laughter. Trump appeared briefly flustered before joking that it was not the reaction he expected but "that's all right."

The moment only reinforced Trump's isolation among allies and foes alike, as his nationalistic policies have created rifts with erstwhile partners and cast doubt in some circles about the reliability of American commitments around the world.

"We reject the ideology of globalism and we embrace the doctrine of patriotism," Trump said.

He referenced a long list of U.N. initiatives, from the International Criminal Court to the Human Rights Council, that his administration is working to undermine.

"As far as America is concerned, the ICC has no jurisdiction, no legitimacy and no authority," he said. The U.S. is boycotting the Human Rights Council, arguing it overlooks abuses by some and serves as a venue for anti-American and anti-Israeli action.

Trump's denunciation of globalism drew murmurs from the room that stands as the very embodiment of the notion.

Other tense moments included his criticism of Germany's pursuit of a direct energy pipeline from Russia, which drew a dismissive headshake from a member of the U.S. ally's delegation. His mention of the United Arab Emirates, Saudi Arabia and Qatar all in one breath, was received by stone-faced Saudi officials. The UAE and Saudi Arabia have been boycotting Doha since last year as part of a political dispute tearing apart the typically clubby Gulf Arab nations.

The laughter in the first moments of the address evoked a campaign line Trump frequently deployed against his predecessor Barack Obama - who embraced international engagement - suggesting that due to weak American leadership, "the world is laughing at us."

In 2014, Trump tweeted "We need a President who isn't a laughing stock to the entire World. We need a truly great leader, a genius at strategy and winning. Respect!"

In addition to the keynote speech, Trump is to chair a meeting of the U.N. Security Council on the topic of countering nuclear proliferation on Wednesday. His four days of choreographed foreign affairs were to stand in contrast to a presidency sometimes defined by disorder.

Appearances on the global stage tend to elevate the stature of presidents both abroad and at home. But even before his arrival for the annual gathering of world leaders and diplomats, the desired image was being overshadowed at home by domestic political troubles, with Trump forced to confront the salacious and embarrassing.

The fate of his second Supreme Court nominee, Brett Kavanaugh, was cast into fresh doubt over the weekend amid a second allegation of sexual misconduct, which Kavanaugh denies.

Drama also swirled Monday around the status of his deputy attorney general. Rod Rosenstein was reported last week to have floated the idea of secretly recording Trump last year and to have raised the idea of using the 25th Amendment to remove Trump from office. The man overseeing special counsel Robert Mueller's Trump-Russia probe and a frequent target of Trump's ire offered to resign and perhaps expected Monday to be fired. He received a stay of punishment at least until Thursday, when he is to meet with Trump at the White House.

With cable news chyrons flashing breathless updates about both Beltway dramas, news of Trump's foreign policy moves from the U.N., led by a new trade deal with South Korea, struggled to break through and disappointed White House aides.

A year ago, Trump stood at the international rostrum and derided the North Korean leader as "Little Rocket Man" and threatened to "totally destroy North Korea."

"It was a different world," Trump said Monday of his one-time moniker for Kim Jong Un. "That was a dangerous time. This is one year later, a much different time."

Trump praised Kim as "very open" and "terrific," despite the sluggish pace of progress toward denuclearization on the Korean Peninsula.

"You are the only person who can solve this problem," Moon said to Trump, relaying Kim's words.

The president said the location for a second summit with Kim is still to be determined, but officials have said Trump is holding out hope it could take place on American soil. Such a move would present a complex political and logistical challenge for the North Korean leader. Trump has often fondly invoked the Singapore summit, a made-for-TV event that attracted the world's media attention and largely received positive marks from cable pundits - reviews that were not repeated for his summit with Russia's Vladimir Putin in Helsinki the following month.

Trump and Moon on Monday signed a new version of the U.S.-South Korean trade agreement, marking one of Trump's first successes in his effort to renegotiate economic deals on more favorable terms for the U.S. Trump labeled it a "very big deal" and said the new agreement makes significant improvements to reduce the trade deficit between the countries and create opportunities to export American products to South Korea.

In both venues, U.S. officials say, Trump is expected on Tuesday and Wednesday to offer a contrast between the path of negotiation chosen by North Korea and that of Iran. Trump earlier this year bucked allies and removed the U.S. from the 2015 Iran nuclear deal, citing Iran's malign influence in the region and support for groups like Hezbollah. The next round of tough sanctions on Iran is set to go into effect in November.

Iranian President Hassan Rouhani is in New York to attend U.N. meetings. U.S. officials said Trump is not seeking a meeting with him but is not opposed to talking if Iran requests a session.

How to speak to someone who's hesitant to get vaccinated

Masks could prevent up to 14,000 COVID deaths by August, model predicts

Trump goes after Pence, McConnell in speech to party donors