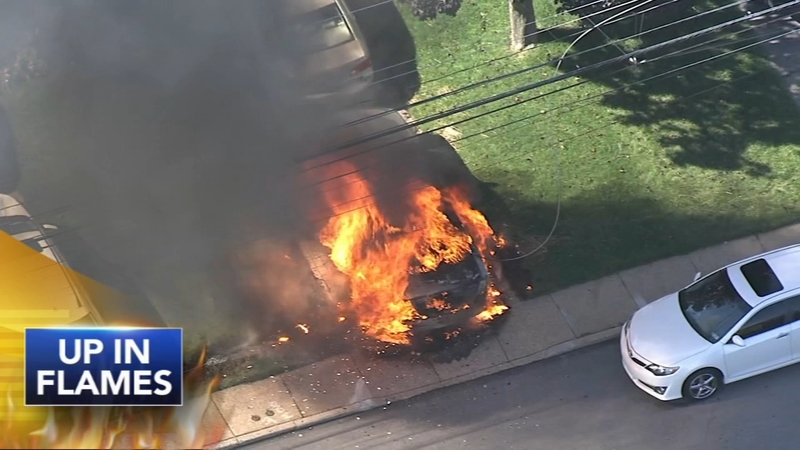 FOLCROFT, Pa. (WPVI) -- A downed power wire caused a car to become engulfed in flames across from a school in Folcroft, Delaware County.

Firefighters were called around 11:30 a.m. Friday for the report of live wires that fell outside a home located across from the Delcroft School on the 700 block of School Lane.

The trouble started in a tree, when a branch came in contact with a 13 thousand volt power line. The line burned and fell to the ground, contacting a parked green Ford.

Incredible video from inside home as cars burn outside. Watch the video from 6abc.com on October 12, 2018.

The car caught fire, and the small blaze quickly became an inferno just outside the home.

Matt Bateman from the Folcroft Fire Company explains that due to the live wire, firefighters were forced to wait.

"So, as long as there is electric, we can't put water on the fire. It puts our guys at electrocution risk. So, we have to standby until it's shut off," Bateman said.

While firefighters waited for the power to be turned off, the fire spread to a second car and badly scorched Badnarik's brand new SUV.

Once power was shut off firefighters were able to move quickly. But the first two cars were smoldering wrecks.

Charlie Moore, the owner of the first car, is happy it wasn't any worse.

"Well yea, it's a car. Nobody got hurt - that's the biggest thing," Moore said. "It's a car. It's nothing, compared to somebody getting hurt. All in all it was a little excitement."