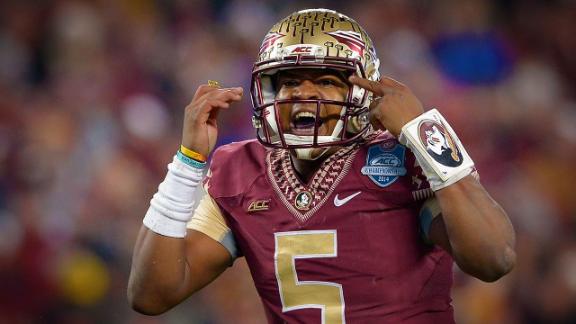 LOS ANGELES -- Florida State quarterback Jameis Winston said he wants to show he's a "good guy" and wants to prove the public perception of him is untrue.

"People always can bring up old things but now I'm doing what I do," Winston said. "I'm a loving person -- I'm loving my teammates. I'm dependable. I'm accountable. I can't show out to the world that I'm that guy because you're not in the locker room and a lot of people don't know me for who I am.

"Perception is reality but perceptions can also be false."

Winston's comments came Sunday in his first news conference since he was cleared of violating Florida State's student code of conduct in connection to rape allegations.

Winston also echoed sentiments he's made before that he is fully focused on his teammates and not allowing any off-the-field drama to be a distraction as the third-ranked Seminoles prepare to face No. 2 Oregon in the Rose Bowl Game Presented by Northwestern Mutual in what could be the final game of his collegiate career.

The 2013 Heisman Trophy winner remains undefeated in his two seasons as FSU's quarterback, but has been in and out of the news for non-football related issues since last season.

In relation to the assault allegations against him, he was not criminally charged and a local prosecutor already decided he didn't have enough evidence to charge Winston after a woman accused him of raping her in December 2012.

Appeals and civil suits are still possible, but last week's code of conduct ruling likely means Winston is free to chase another title into the championship game Jan. 12, if the Seminoles beat Oregon. Winston also is expected to be a high pick in the upcoming NFL draft if he forgoes his final two seasons of eligibility next year.

"This whole season has been the same," Winston said on Saturday, in his first public appearance since he was cleared of violating FSU's conduct code. "Because I come here to play football, get my academics right, and I really wasn't focused on anything other than that."