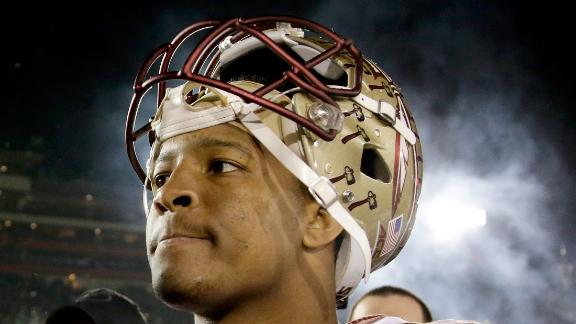 PASADENA, Calif. -- Florida Statequarterback Jameis Winston gave no hints about his future plans after the No. 3 Seminoles lost 59-20 to No. 2 Oregon on Thursday in the Rose Bowl Game presented by Northwestern Mutual.

"I'm not focused on that at all," Winston said when asked whether he would leave school early. "I'm looking forward to next season and playing baseball. So I'm just trying to get better every day."

Winston, a redshirt sophomore, has until Jan. 15 to declare for the NFL draft. If he does leave school, Winston is expected to be one of the first quarterbacks drafted. In fact,Tampa Bay Buccaneersgeneral manager Jason Licht was at the Rose Bowl to watchboth Winston and Oregon counterpart Marcus Mariota.

While Winston mentioned his baseball career Thursday, whether he does play his second sport for the Seminoles remains to be seen. Winston has played baseball at Florida State the last two seasons, and is considered a professional prospect in that sport, as well.

His father, Antonor, said in June that Winston would return for 2015. But much has changed since.

"Have to wait and see what the future holds," coach Jimbo Fisher said.

Winston finished 29-of-45 for 348 yards with a touchdown and an interception, and also had a costly fumble on a fourth-down play in the third quarter.

The 2013 Heisman Trophy winner remained undaunted, however, after the loss -- even taking to Twitter to express his happiness at everything the Seminoles have accomplished this season.

Fisher had some sharp words for Winston after the two were seen having an exchange on the sideline after the fumble. Fisher downplayed the incident in the postgame news conference.

"[Winston] gets animated, but it wasn't words," Fisher said. "One of the receivers on the play ... the guy fell down on the route. It would have been wide open. I couldn't see it from there. I asked him what happened and that was it. He always gets animated like that when he talks."

Said Winston: "I was just trying to make a play. It was an unfortunate play. I never thought I would slip, throw the ball backwards. It was fourth down, so obviously I'm trying to compete my tail off to try to get us in a good situation."

Jameis Winston After FSU's Loss
Florida State quarterback Jameis Winston addressed the media after a loss to Oregon in the Rose Bowl.