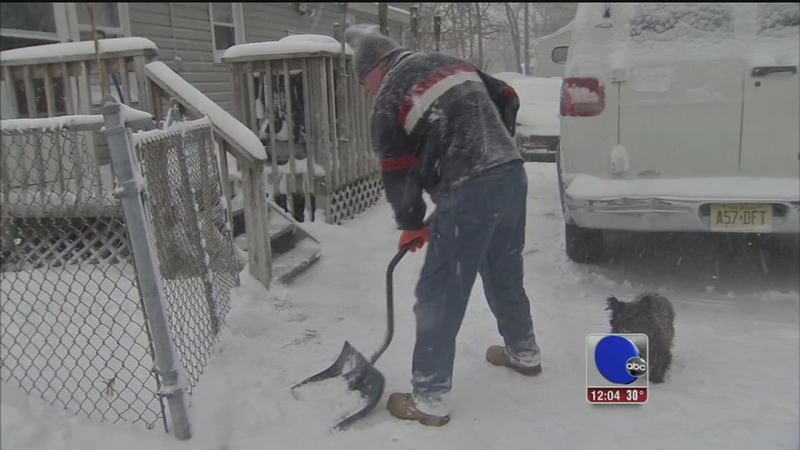 TOMS RIVER, N.J. (WPVI) -- By Tuesday afternoon in Toms River, New Jersey, the sun was out and the main part of storm was gone.

There was snow all morning, but it still was not enough for some folks.

"Where's my snow? I wanted to get up and see 2 feet of snow and come out and play," said Lisa Taylor of Toms River.

Lisa and her happy dog Sammy watched this morning in Toms River as Tony Fletcher manned the shovel clearing sidewalks.

"We came out last night and shoveled all this, so it's pretty easy. It's pretty fluff and it's not too hard to push," said Tony.

Or to pull through, as little Carly Leonard's dad learned during a ride on a snow-covered street.

"Got the day off from work, so I figured it'd be fun to play with my daughter in the snow," adds Joe Leonard of Toms River New Jersey.

It didn't total up to as much as we originally expected, but it snowed throughout the night.

Snow plows swept back and forth along Route 37. The overnight travel ban meant the plows had clear sailing and didn't have to worry about cars.

Toms River Public Works Director, Lou Amoruso said, "Let the plow drivers do their job without any obstruction. It's a whole lot safer, just makes a world of difference."

"We were expecting at least a foot and a half the way they were saying on the news. But I don't know might be 6 to 8 inches out there," said Lacey Twp., N.J. resident, Mike Venezio.

The travel ban in South Jersey was lifted around seven this morning, but a few folks were on the road before that.

Julie Cook said, "I'm a nurse. We never close. I work for Brighton Gardens in Middletown and I have 130 seniors that expect a nurse so I have to go."

"Everybody panics, so they made this out to be like it was going to be a horrible thing and roads are drivable as long as you're careful," said Dave Kaldenberger of Toms River, New Jersey.
Related topics:
weathertoms river townshipn.j. newssnow stormweather
Copyright © 2021 WPVI-TV. All Rights Reserved.
TOP STORIES
Andy Reid in stable condition at hospital
Trial for Montco teen charged with stabbing ex-girlfriend 30 times
Shooting outside Center City hotel under investigation
Cheryl Burke says she has COVID-19
Record-breaking! 66-yard field goal makes NFL history
Pfizer to ask for approval of COVID vaccine for kids in matter of days
Mayor: 'I am heartbroken and outraged' after city tops 400 homicides
Show More
NJ high school changes dismissal time due to bus driver shortage
2 shot after altercation in Wawa parking lot; suspects wanted
Can the Eagles defeat the Cowboys? Jaws has a final score prediction
Bus driver shortage, supply chain impacting Chester Co. farm's fall
Motorcyclist thrown from bike in fatal Kelly Drive crash
More TOP STORIES News