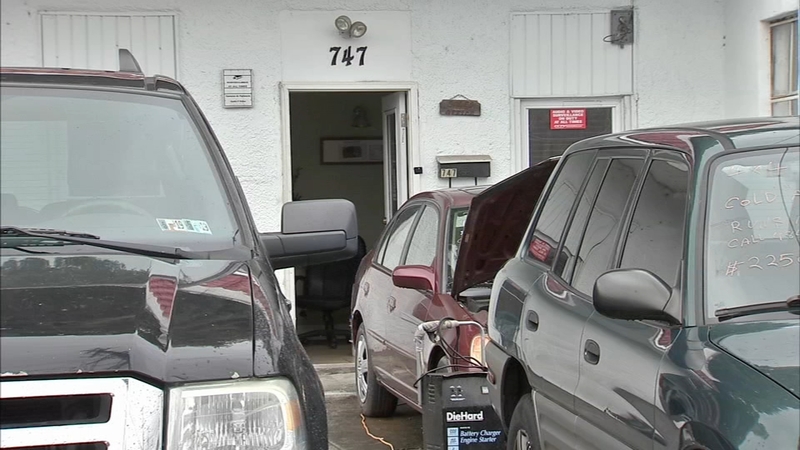 NORRISTOWN, Pa. (WPVI) -- Approximately $10,000 was stolen from the El Camino car dealership on East Ridge Pike during a string of violent robberies.

Investigators were able to make five arrests thanks to surveillance footage and a sting operation, but they are still looking for a man and a woman who were in on the crimes.

Despite the multiple arrests, the series of life-threatening armed robberies has everyone who works here on edge.

"If I'm the only one here, I do feel terrified. Kind of makes me want to own a gun myself," said employee Cosmin Oliver.

"It's scary now to work at the dealership, the owner won't stop by for more than 10 minutes, and that's because he's been robbed at gunpoint twice, beaten and nearly kidnapped," said Oliver. "He's terrified, his wife is terrified."

Oliver walked us through what happened at the shop on East Ridge Pike in Norristown back on April 30.

"Instead of pulling out a license, they pulled out guns," said Oliver. "Then another black guy came in and forced him to the ground. They took more than 100 titles and $8,000 in cash."

That man has been identified as Damon Murphy. Murphy was arrested on Friday. Still on the run are 28-year-old Rebecca Roman and an unidentified female accomplice.

Following the robbery, the shop invested in a new security camera system. On July 18, police said these cameras caught another gunpoint robbery and a failed attempted kidnapping, carried out by three men.

Before their court hearings, the DA said Michael Dukes went to the shop with a gun to intimidate the victim into keeping quiet. Police officers were hiding out and arrested Dukes on the spot.

Police believe 29-year-old Calvin Berkins was Dukes' get-away driver who sped off when officers moved in.

Berkins is also wanted by police.