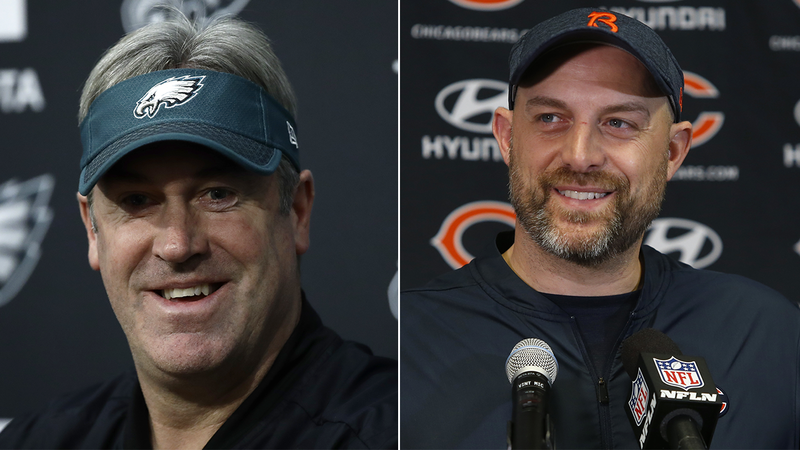 PHILADELPHIA (WPVI) -- Two coaches will have to put their friendship aside this Sunday when the Philadelphia Eagles meet the Chicago Bears in the NFC Wild Card game.

Both Doug Pederson and Bears head coach Matt Nagy were members of Andy Reid's coaching staffs on the Eagles and Kansas City Chiefs.

Nagy, a native of Lebanon, Pennsylvania, was a quarterback for the University of Delaware.

He served as coaching intern during Eagles training camp in 2008 and 2009. Pederson was hired as offensive quality control coach in '09.

In 2010, Nagy served as a coaching assistant for the Eagles.

Nagy then served two seasons (2011-2012) as the team's offensive quality control coach, while Pederson served as the quarterbacks coach during the same years.

In 2013, Nagy and Pederson followed Reid to Kansas City.

Now, Nagy is in his first season as head coach of the Bears. This is Pederson's third season as Eagles head coach.

The friendship between Nagy and Pederson runs much deeper than football.

"Whether it's playing golf together, breaking down quarterbacks, putting plays...it goes on and on. Eating lots of ice cream late at night. He loves the soft squeeze vanilla ice cream with the rainbow sprinkles. That's his favorite," Nagy said.

Pederson's love for ice cream is no secret to Eagles fans. Prior to Super Bowl LII, Pederson told his players that if they win the championship "I'll treat you to some ice cream!"

Players say it's a line Pederson uses often to end his meetings. Former Eagles Brian Westbrook said Reid used to his end meetings with "I'll treat you to a cheeseburger."

One more note on Nagy's connection to the Eagles: He was quarterback for the Birds for one day back in 2009. When backup QB Kevin Kolb got injured, Reid turned to his assistant to fill the role.

But the NFL stopped Nagy's quarterback career short after finding out he was already under contract with the Arena Football League.