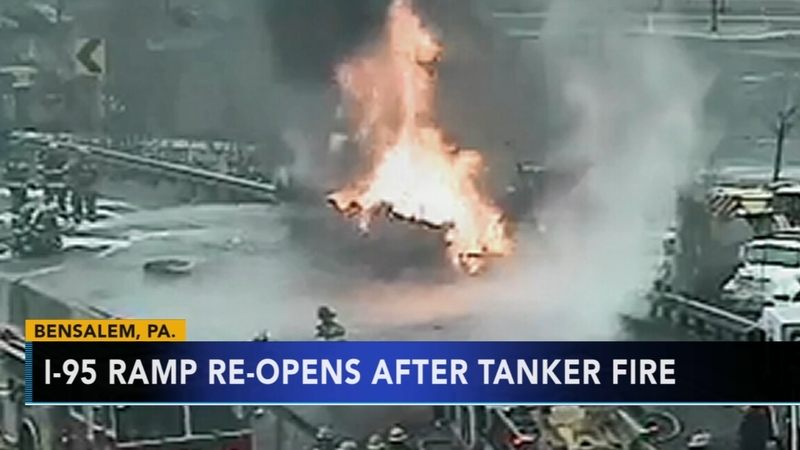 Part of Route 1 in Delaware County to close this weekend

The ramp had been shut down since the blaze erupted around 10:15 a.m. Thursday.

Video shows Penndel, Pa. firefighters arriving on the scene of a tanker truck fire on an I-95 ramp on February 7, 2019. Video courtesy Penndel Fire Department.

The ramp was closed so crews could repair the damage from the fire, which burned for more than two hours.

"PennDOT maintenance crews and contractor worked since the crash to clean up debris; remove damaged sections of pavement; resurface and restripe the roadway; and install new guiderail," PennDOT said in a statement.

Tanker truck bursts into flames after crash on I-95 ramp in Bensalem, Pa. Maggie Kent reports during Action News at 4pm on February 7, 2019.

The ramp from eastbound Woodhaven Road to northbound Interstate 95 was also closed immediately following the crash. However, PennDOT said, damage to that ramp was minimal and it was reopened early Friday morning.

The driver and passenger inside the truck remain hospitalized in critical condition.

Tanker crash on I-95 ramp in Bensalem. Rick Williams and Sarah Bloomquist reports during Action News at Noon on February 7, 2019.

Flames were shooting from the overturned truck as a thick, black plume of smoke rose into the air.
"I ran out of the house. I looked towards 95 and I saw huge flames," said Bill Fuchs of Bensalem.

The oil inside the truck provided the fuel the fire needed to burn.

Bensalem resident Butch McDevitt was a Philadelphia firefighter for 35 years and has worked fires like this one.

"It's hard to drown with water so they generally try and mop it up by building some kind of moat and redirecting it somewhere else," he said.

This ramp is no stranger to crashes. Local tow truck drivers say they are called to this ramp several times per month for overturned vehicles.