From a life sentence to a life serving: A special perspective on 'One Book, One Philadelphia'

It is that stark truth that made me want to go talk to Ghani Songster for my special series around this year's "One Book, One Philadelphia" selection, "Sing, Unburied, Sing," by Jesmyn Ward.

The book takes you into the deep waters inside us all: among the storylines, a young biracial boy, Jojo, gets his grandfather to tell him about the tragedy of his young life.

As a teen Pop was caught up in a common practice in the first half of the 20th century: young black boys were sent to adult prisons for minor infractions - loitering, jaywalking, truancy, littering - to spend years in harsh conditions doing hard labor.

It was a state supported scheme to get free labor. In Parchman prison, Pop befriends an even younger boy, Richie, who is clearly still just a child. Tragic events unfold and Pop is forced to make a choice. He does something shocking and awful, an act that stains his soul, but is clearly a kindness compared to the other possible outcomes.

Songster ran away from home at the end of his freshman year in high school. He left Brooklyn and came to Philadelphia, falling in with a terrible crowd.

One night in a crack house, he and another teen got into an argument with another boy, whom they killed.

Songster was sentenced to life in prison. He was 130 pounds, no hair on his face, scared, and in lock up with adults.

He doesn't tell me details, he just says back then there were few cameras and lots of blind spots. He had to figure out how to navigate a dangerous reality. 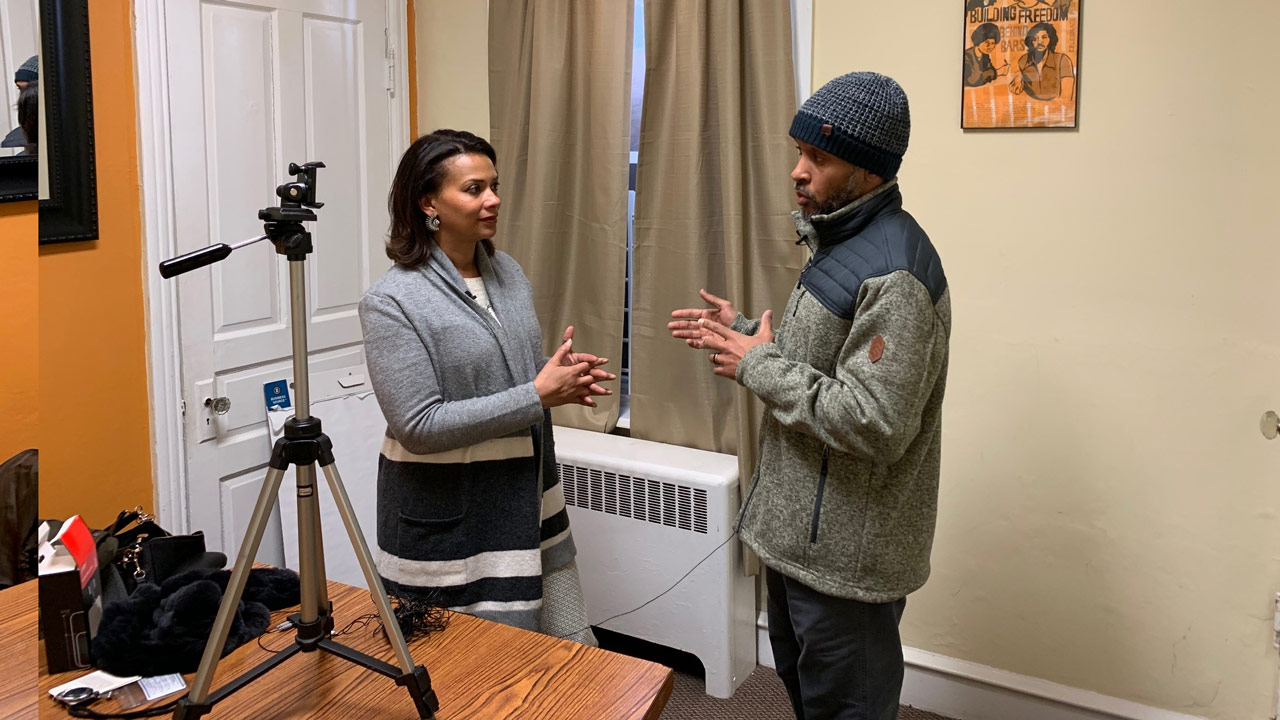 "It's a miracle I'm standing here with you, not just being free, but being in one piece," Songster says.

Another miracle was a landmark Supreme Court case in 2012 that said it was unconstitutional for children to be sentenced to life in prison.

After 30 years, at age 45, Songster walked into a new reality.

He says the book spoke to him from so many angles.

First is how he understands what it is for Pop to be living with his horrible history.

"What do I tell my little brother about what I've done," Songster asks, thinking of the teen he murdered.

He's been out for 14 months, married, working for a law non-profit as a paralegal in West Philadelphia, and falling in love every minute more with his new son.

"How am I going to tell my little son Karame, when he gets of age, what I did? That I was imprisoned for taking another life?" Songster says.

In the book, Pop is stoic, the backbone for Jojo as his drug addict/dealing parents abandon their responsibilities. It takes pages for Jojo to get the truth out of Pop. And, when he does, Pop is no longer an elder. He is momentarily reduced back to a devastated young man grappling with grieving and blame.

I get the same feeling from Songster. He's a gentle presence, a man who gives me natural remedies for my cold, and a vegan pacifist.

But his eyes go wide as he tells me about his re-sentencing hearing, when a judge commuted his sentence to 30 years to life, which meant he was able to go free after three decades served.

He says he got up to make a statement to the victim's family.

He thought he spoke for five minutes. Later he realized it was more like 20, plumbing his own depths to explain to them his never ending regret for what he had done, begging them to deem him worthy not just of freedom, but more of their forgiveness.

He is incredulous still as he relates the loving way his victim's father and sister accepted his apologies, saying he and their murdered loved one were all lost at the time. He says it is a daily weight to be good enough, to try to repair what he can through living a right life.

Which leaves me to wrestle with my mind. Every day I tell you about the worst of what humans can do. Some stories hurt to say and I wish I didn't know. It is crushing when the victims are children, unfathomable when the perpetrators are children. And when you've done terrible things, what is the right course? Is the right punishment that you be shunned and hated forever? Is there redemption to be had?

Songster says he understands these impossible questions because he himself didn't know what to do with himself.

"Even though I wasn't innocent, It made no sense to me to process...process that I had done something like that. I wanted to inspect my life and find out, where did I go wrong?" Songster says.

He says it took him years to grow into the answer and guide his steps forward. It's hard for me to imagine that violent teen in this man, who mixes his comments with references to Buddhism and his thoughts on why we shouldn't harm animals.

Songster tells me he understands the stunted, lost energy of many of the characters.

"I'm mature in a lot of ways," he says, "But in some ways, I'm in a certain spot because I've missed so much of life."

And that does suffuse the book: Leonie being lost as a mother; Michael being lost from his desire to get his racist parents to accept his children and shake the grip of meth; Pop being lost in his wife's impending, painful death and his own past; Jojo, lost as a kid in a sad life, disappointed in so many of the adults around him and anchored only in his love of his sister.

"Everybody in this book feels so isolated," says Songster.

As I go to leave Songster, I'm struck by a few things. I think the evil of his crime punishes him still, perhaps more than a jail cell, that no day goes by that he doesn't think about it and regret.

He says there are no pat answers as to why prison distilled something better in him, but makes others only more broken and predatory. I wonder what I would do if I was 15 and facing the rest of my life in jail. And then I realize so many of us face other jails, locked in memories and hurts that won't let go. How do you go on and go to something better I ask him? How do you find joy?

"What worked for me behind the wall is, just when you're standing there in the gap between the world as you'd like it to be and the world as it is, is you find joy in faithfulness: your faithfulness to yourself, your gifts, the people who love you," Songster says.

He thinks back on what saved him.

"I knew I was not forgotten. I had love. I could work to regain my humanity and moral rectitude. I could find joy in being more than my worst act," Songster says.

I walked back out onto the West Philadelphia streets, lost in my thoughts.

I think about Jojo, accepting the realities about his parents, they will never do right, but keeping faithfulness with his grandparents and sister.

I think about Pop breaking down in the face of his past, but faithful in his decision to earn back, every day he lived, like Ghani, his humanity and rectitude.

I think about all the young people in this city struggling to dream and move beyond, how often we look past them, if we see them at all. I look into my own judgmental and judged heart, my own often unsuccessful journey to be my best self.

Please watch more of my talk with Ghani Songster and let me know what you think, especially if you're reading the book!

Look for more of these conversations, the ones already posted and the others to come, right here on 6abc.com