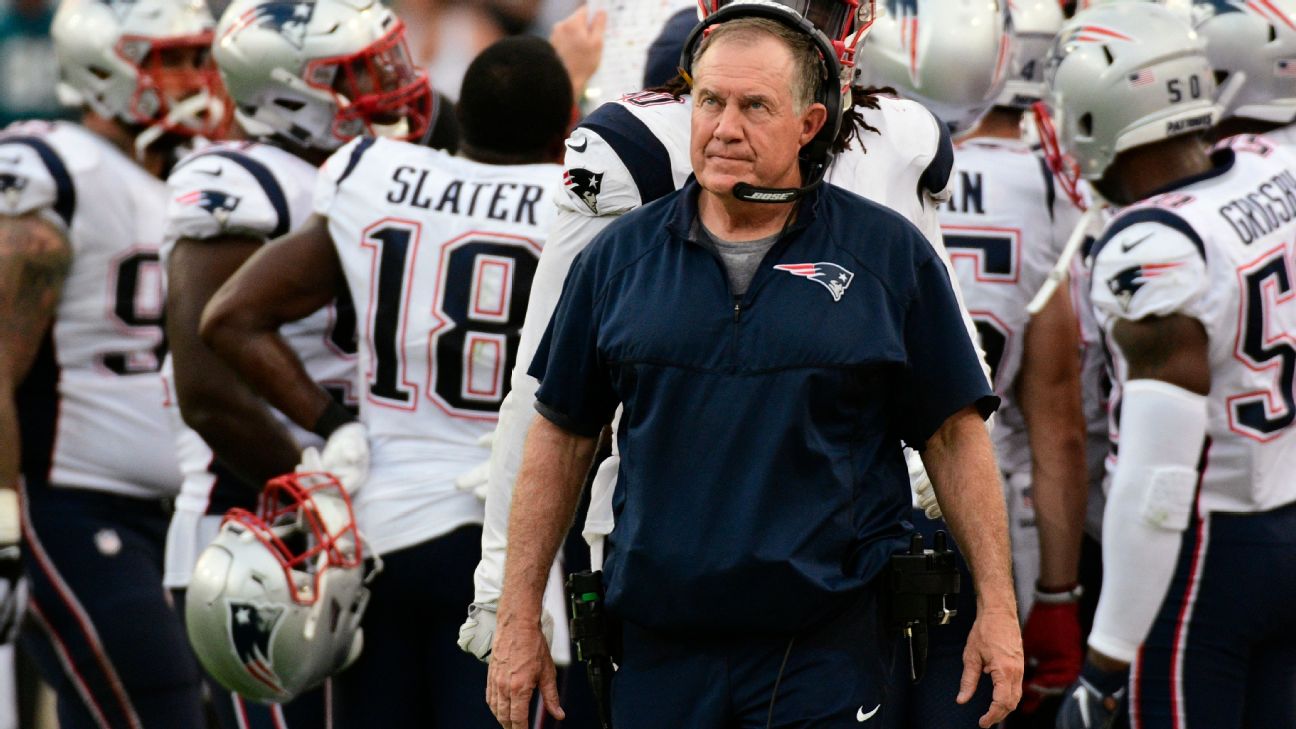 Every mock draft you've seen is wrong. I'm 100 percent certain of it.

Mock drafts are fun and fascinating ways to help you pass the interminable amount of time before the 2019 NFL draft. It's cool to sit there and match up player with team/need and imagine what this guy would be like in that scheme. Mock drafts have a purpose, mainly as an entertainment device.

But not a single one of them will be completely accurate, and, in fact, the vast majority of them won't even get the top five correct because of trades.

Yes, trades. You know there will be trades in the first round, but you don't know when and where they'll happen. Last year, there were seven trades made during the first round. There were 10 different teams involved in those trades. Which means that all of the mock drafts you were reading this time last year were wrong, because teams didn't stay in their spots.

With that in mind, and with (checks calendar, sighs) 16 days still left until Round 1 begins, let's take a look at which teams might be candidates to make the trades that mess up all the mocks.

Please note, this is not intended as a comprehensive list. I don't want to hear, "What about the Lions?" all morning on Twitter. Obviously, any team is a candidate to move up or down depending on circumstances. This is merely an effort to highlight some of the teams most likely to do so, based on my own reporting, the teams' histories and, yeah, some educated guessing.

Ranking the five teams most likely to trade up

Top draft assets: One first-round pick (32); two second-round picks (56, 64); three third-round picks (73, 97, 101)
It's a well-worn draft axiom that Bill Belichick likes to trade down and amass picks, because he's usually picking at the bottom of the first round and choosing among players he has graded as second-rounders anyway. But last year, the Pats stood pat and made two first-round picks, one of which was a running back. You can't be sure of anything anymore.

There's a thought around the league that the Rob Gronkowski retirement leaves the Patriots hungry for offensive playmakers. This first round is strong at tight end, and New England has 12 total picks -- tied with the Giants for most in this draft. That enables the Pats to move up if there's a tight end or playmaking wide receiver within range of where they sit at No. 32.

Of course, if that doesn't happen, you could easily see the Patriots trading down instead of up, because oftentimes teams like to come up to that 32nd pick to secure a player with a fifth-year option.

Top draft assets: One first-round pick (25); two second-round picks (53, 57)
Philly is another win-now team looking for instant-impact players, but the speculation around the league is that the Eagles would look to move up from No. 25 if an offensive tackle they like starts to tumble.

Jason Peters is 37, and the Eagles can't afford to get caught short on the offensive line anytime soon. The Titans are picking 19th and have just six picks in the draft, and the Seahawks are picking 21st and have a draft-low four picks. Those are a couple of spots where a team like Philly could make a deal with a team looking to add another pick.

Top draft assets: One first-round pick (13); one second-round pick (48); one third-round pick (78)
Ryan Fitzpatrick obviously isn't the long-term answer at quarterback, and though there have been whispers of the Dolphins potentially wanting to wait until next year's draft-- which appears to be loaded at quarterback -- to find their franchise guy, that strategy can be risky.

If they have someone they really like at quarterback in this class, they might have to move up from No. 13 to get him. The 49ers at No. 2 and the Jets at No. 3 are both looking to move down, and if that's too far for the Dolphins to jump, don't rule out pick No. 5, as Tampa Bay GM Jason Licht hasn't been averse to trading down in the past.

With two first-round picks, the Giants are positioned to get just about anyone they want if they package both in a trade. Indications are that they're not excited about doing that, though, and that they're more likely to use the No. 17 pick (the one they got from Cleveland in the Odell Beckham Jr. trade) to address their long-term quarterback issue.

That would mean taking a defensive building block at No. 6, then potentially moving up from No. 17 if they want to get someone like Drew Lock, Daniel Jones or Dwayne Haskins, if he starts to tumble. There remains a chance the Giants could make a deal for Arizona'sJosh Rosen if he becomes available, but sources close to the situation say the Giants aren't certain about Rosen at this point.

Top draft assets: One first-round pick (11); one second-round pick (42); one third-round pick (72)
Even though new coach Zac Taylor has professed his admiration for incumbent starterAndy Dalton, there's a lot of noise around the Bengals and the top quarterback prospects in this draft. They sit at No. 11 in the first round, but they have 11 total picks -- more than any team but the Patriots and Giants. If Cincinnati needs to get into the top 10 to secure someone like Haskins, it is positioned to do it.

Ranking the five teams most likely to trade down

The Seahawks have only four total picks, and just two in the top 120. (They traded their second-round pick to Houston in the Duane Brown deal and their sixth- and seventh-rounders to Green Bay and Oakland in smaller deals.)

Sitting at No. 21 in the first round, the Seahawks hold a pick that could be of interest to teams, as it's roughly the point in the first round at which rookie contracts stop being fully guaranteed. Seattle needs draft capital and will have the "For Sale" sign out.

Top draft assets: One first-round pick (22); two third-round picks (85, 102)
One pick behind the Seahawks, the Ravens (with eight total picks) don't have as significant of a need to add capital but still are always on the lookout for a deal.

They need to fill a lot of holes on defense, and if the high-impact guys are drying up by No. 22, Baltimore has shown that it's nimble enough in the draft to slide down a couple of spots and maximize value.

Top draft assets: One first-round pick (19); one second-round pick (51); one third-round pick (82)
Mentioned above as a possible partner for teams looking to trade up, Tennessee holds the No. 19 pick and just five others. The Titans also had just four picks in last year's draft.

Top draft assets: One first-round pick (3); two third-round picks (68, 93)
The Jets would love to replicate the Colts' end of their own pre-draft deal from last March and recoup at least one of the second-round picks it cost them to move up for Sam Darnold. They have made it clear the No. 3 pick is for sale.

If Arizona takes Kyler Murray No. 1 overall, the Jets' pick (and the 49ers' pick at No. 2 overall) could become a lot more valuable to teams trying to move up to get the quarterbacks they want.

This one could go either way. Washington is the current favorite among league insiders to acquire Rosen if and when the Cardinals move him. If it doesn't trade for him, Washington could be a trade-up candidate on the lookout for a Haskins or Lock.

If it does get Rosen, it's going to cost it one or a couple of its nine 2019 picks, and the team could slide back to try to recoup some of that cost.

Where the Oakland Raiders fit in

Oakland has three first-round picks -- Nos. 4, 24 and 27. It has its own pick, the Bears' pick (from the Khalil Mack trade) and the Cowboys' pick (from the Amari Cooper trade). The Giants and Packers each have two first-round picks, but having three (as well as a high second-round pick at No. 35) gives the Raiders the ability to maneuver in any direction they want.
They could deal down from No. 4 if someone makes a great offer. They could package Nos. 24 and 27 to move way up and take a second premium player. They could pick a quarterback if they love one (some think they love Murray, others think Jon Gruden is a big Lock fan), or they could help dictate who gets to move up to take one.

This is the payoff from last year's sell-off, and all eyes will be on Gruden and new GM Mike Mayock to see what they do with these picks. 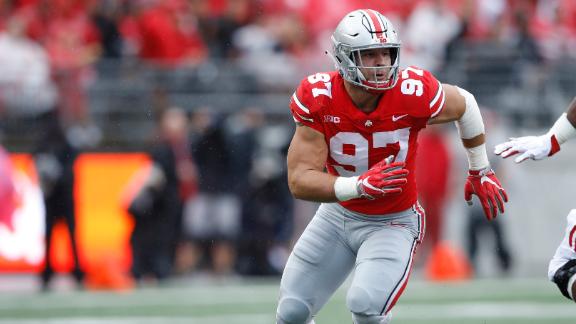 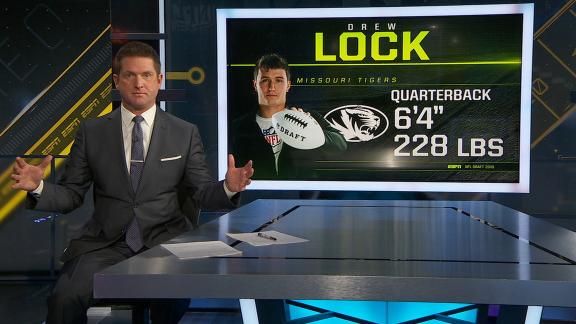