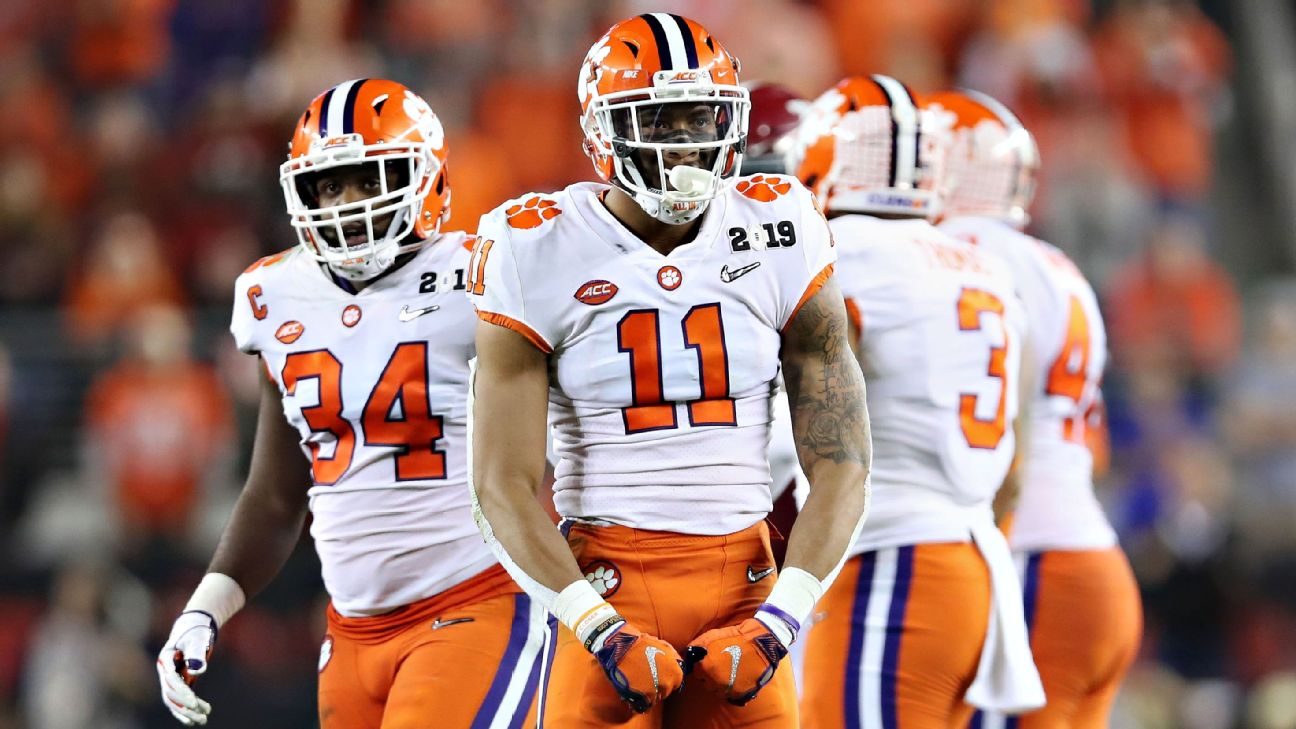 The stars on the nation's Top 25 teams are easy to recognize and the focus of attention, even in the offseason.

But what about key players who are under the radar? Here are some names to remember for the upcoming season.

On a defense filled with superstars, Simmons was easy to overlook last season. But he blossomed in the College Football Playoff, and now he'll be at center stage of a revamped unit, playing the fulcrum in the middle. Simmons was solid against the run and excelled against the pass, showcasing his versatility in a hybrid linebacker/nickel corner role. For the year, he allowed just one touchdown pass and 2.6 yards after the catch per completion. -- David M. Hale

No. 2 Alabama: Defensive back Xavier McKinney

If not for all the talk of Deionte Thompson being one of the best safeties in college football last season, we might not have overlooked McKinney so much. According to one NFL scout, McKinney actually projected as the better pro prospect. And for Alabama's secondary to make the improvement it needs, he'll have to make that outlook a reality. He has shown the ball skills and the ability to play in the box and stop the run. If he can do that consistently and provide a stabilizing force on defense, we could see a lot of the problems that came up against Clemson get solved. -- Alex Scarborough

Murray was the best tackler on an Oklahoma defense that otherwise struggled to bring opponents down last season. With fellow linebacker Caleb Kelly out indefinitely after suffering an injury this spring, Murray is even more indispensable to the Sooners. -- Jake Trotter

This is going to be a young but talented linebacker corps, and coach Kirby Smart is going to need Crowder to be the shepherd. As the projected starting Mike linebacker, the senior will be in charge of calling the entire defense. Last season, he racked up big plays with six tackles for loss and a pair of interceptions, but it's the week-in, week-out effort that Georgia needs. If he can provide leadership and help his younger teammates along, this could once again be one of the better defenses in college football. -- Scarborough

With all the new faces on Ohio State's offense, it's easy to forget that the Buckeye defense will also look a lot different in 2019. Fuller has a trove of experience heading into his senior year. New co-defensive coordinator Jeff Hafley may provide the push Fuller needs to become a full-fledged star in Columbus and plug some holes that plagued Ohio State's defense a year ago. (Editors' note: This item has been updated since its original publication.) -- Dan Murphy

The fifth-year senior is the closest thing the Irish have to a sure thing at linebacker after losing two talented starters from the 2018 team. Bilal has played in 12 games each of the last three seasons and made 50 tackles as a starter on last year's playoff squad. Linebacker remains the biggest question mark for Notre Dame after spring ball. Bilal can fit at multiple positions and be moved based on which of his teammates is ready for the field this fall, which makes him all the more essential to the middle of the defense. -- Murphy

No. 7 Texas: Running back Keaontay Ingram

The Longhorns have been too reliant on quarterbackSam Ehlinger for a running game over the past two years. To take pressure off Ehlinger and keep him healthy, Texas needs Ingram, a promising sophomore, to help supply more of a steady ground game from the running back position. -- Trotter

Ask those inside the Florida football facility for their most valuable player who gets no national pub and the easy answer is Reese. The quarterback on defense, his role as most indispensable was made clear in a loss to Kentucky early last season, when the Gators clearly missed not only his presence but his leadership. His 11-tackle performance in the win over LSU only solidified that premise. Over the past two seasons, he has a combined 179 tackles. -- Andrea Adelson

Jim Harbaugh said Mason is approaching Owen Marecic territory with the number of things he can do to help the Wolverines in 2019. Comparisons to the former Stanford two-way starter are rare in Harbaugh's book. Mason is slated to see time at a number of thin positions on the depth chart this season, including the interior defensive line and in the offensive backfield. -- Murphy

Scott has been a longtime starter in the middle for the Ducks, and while his stats aren't sexy, he is a very important part of Oregon's defense. The second-team All-Pac-12 player was very disruptive up front for the Ducks last year, and Scott helps push plays to his teammates. He had 29 tackles with 3.5 tackles for loss, including one sack last season. -- Edward Aschoff

The Aggies took a huge step forward in run defense last season, and their depth and physicality at defensive tackle was a big reason for that. With some key players from that group gone (namelyKingsley Keke and Daylon Mack), it puts even more on the shoulders of a veteran such as Madubuike, who performed admirably in 2018. The physicality and attitude he brings inside is critical to the Aggies' success up front; he has been a consistent force for them. If he can continue that and get even better -- along with defensive tackleBobby Brown IIItaking another step forward -- defensive coordinator Mike Elko, will be a happy camper. -- Sam Khan Jr.

Divinity is a proven talent, and it's why the Tigers tabbed him to move into All-American Devin White's old spot. Divinity lined up last season at outside linebacker, but with White gone, Divinity will take his skills inside -- at least most of the time. He has embraced the challenge this spring and taken some cues from his predecessor as he grows into the role. Divinity also will have chances to rush the passer from his old spot, because the Tigers don't want to take away one of his strengths. His success -- wherever he lines up -- is critical to the LSU defense this season. -- Khan

As a redshirt freshman, Taylor played his way into the starting lineup early last season and ended the year as one of the most productive players on the Cougars' underrated defense. He finished the season with 7.5 tackles for loss, four sacks, a team-high six quarterback hits and three forced fumbles. -- Kyle Bonagura

Offensive linemen generally only get noticed when something has gone horribly wrong. But in Johnson's case, it's time to give the man in the middle of the UCF line the credit he so richly deserves. Johnson has started 38 of 39 games in his career, going back to his true freshman season. And he is a big reason why the UCF offense has put up monster numbers on the ground and protected the quarterback so well over theKnights' past two conference championship seasons. -- Adelson

No. 15 Syracuse: Defensive back Christopher Fredrick

Plenty of attention went to the improved defense last season, with the edge rushers posting big stats and Andre Cisco blossoming into an All-American. But one of the reasons the whole thing worked so well was the exceptional effort of the cornerbacks, led by Fredrick. One year after a disastrous secondary upended Syracuse's season, the unit was among the most improved in college football. And Fredrick proved to be a valuable leader, allowing fewer than 50 percent completions and just 6.8 yards per attempt when serving as the primary defender. -- Hale

Quarterback Trace McSorley, running back Miles Sanders and receiver DeAndre Thompkins are all off to the NFL, while receiver Juwan Johnson and Brandon Polk both decided to transfer. Those are some big holes left on the offense, which means that Hamler is going to be relied on heavily to be a big playmaker and stable force in 2019. He led the team in receiving yards and kick return yards, and he now is going to have to take on a leadership role within the offense, as well. If Hamler can take the next step, it will have a big impact on the team's production in 2019. -- Tom VanHaaren

No. 17 Washington: Defensive back Myles Bryant

The senior started 13 games last season and was a first-team All-Pac-12 member, yet he still hasn't received the national publicity people around program believe he deserves. Bryant, who can play all over the Huskies' defensive backfield, will certainly have a future in the NFL; but he is a player his coaches believe is the All-American type we just aren't talking enough about. -- Aschoff

Even though Covey is sidelined this spring as he rehabs from a torn ACL, he was named one of the team's spring captains. He was far and away the Utes' most reliable receiver in 2018, after returning from his LDS mission, and he is expected to be healthy in time for the start of next season. Barring some kind of setback, his status as indispensable could be put to the test. -- Bonagura

No. 19 Northwestern: Running back Isaiah Bowser

A lot of talk around Northwestern's offense is set on new quarterback Hunter Johnson, who transferred from Clemson. It's natural to have the focus on him since he was a former top recruit and could bring a different level of play at the position for the Wildcats. But Bowser could be a big help to Johnson's transition, especially after what he was able to accomplish last season. He led the team in rushing with 866 yards and six touchdowns and provided a punch at the position when Northwestern needed it. -- VanHaaren

He is far from under the radar in Pac-12 circles, but Adebo is worthy of recognition beyond that. He led the nation in passes defended as a redshirt freshman last season, and Adebo will be among the best defensive players in the country in 2019. It's pretty simple: Stanford needs him on the field and playing at a high level to compete for the Pac-12 title. -- Bonagura

No. 21 Wisconsin: Running back Garrett Groshek

While Jonathan Taylor and Taiwan Deal get most of the carries, and most of the rushing yards, Groshek is still an important piece of the offense. He averaged 6.5 yards per carry last season, and Groshek has the mentality and persona that embodies Wisconsin football. He is a tough leader within the locker room, and a few people at Wisconsin mentioned Groshek as an indispensable player on the team. -- VanHaaren

No. 22 Iowa: Running back Mekhi Sargent

The tight ends got a lot of the glory last season for Iowa, and rightfully so. Noah Fant and T.J. Hockenson are potential first-round draft picks. But Sargent was a stable force for Iowa in the run game. He split carries with Toren Young, but Sargent still had 745 rush yards with nine touchdowns on the season. That one-two punch was a big part of the offense, and it should help even more in 2019 with Sargent in his second season. -- VanHaaren

A lot of Auburn's issues on offense trace back to the line. When it came to protecting the quarterback and opening up holes in the running game, there was a lot left to be desired. But the good news is that left tackle Wanogho is back, forgoing the NFL draft this offseason. If he can make strides, he could become a stabilizing force on the offensive line, making running backJaTarvious Whitlowthat much better, while protecting the blind side of whoever the starting quarterback might be. -- Scarborough

The defense needs to take a step forward in 2019 if the Cornhuskers are going to compete in the Big Ten West. Daniels, who joined the team as a graduate transfer from Oklahoma State, immediately emerged as a leader this spring. The 320-pound interior lineman has helped keep his teammates accountable and should also provide an upgrade for a group that allowed nearly 200 rushing yards per game a year ago. --Murphy