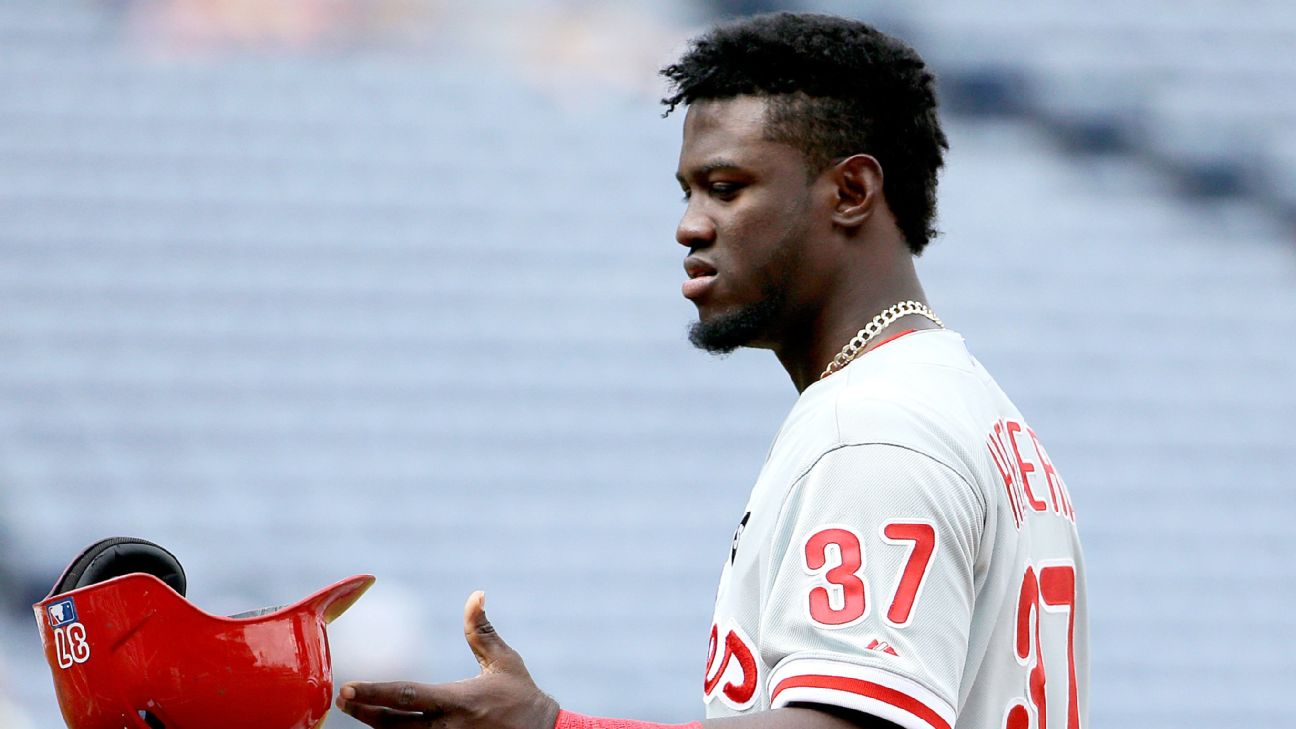 Herrera has been placed on administrative leave by Major League Baseball per the league's domestic violence policy. The leave can last up to seven days while MLB officials look into the arrest, and it can be extended while the probe continues.

Phillies general manager Matt Klentak said Tuesday that he can't discuss specifics of Herrera's case, but he did say the outfielder called the team to apologize.

The Atlantic City Police Department said in a statement posted on Facebook that officers responded to the Golden Nugget Hotel and Casino at 8:33 p.m. ET on Monday after a report of domestic violence was made. Officers found Herrera's 20-year-old girlfriend with "visible signs of injury to her arms and neck that was sustained after being assaulted by her boyfriend."

The woman refused medical attention, and Herrera was located in his hotel room and arrested without incident and released. A municipal court date has been set for June 17.

The NL East-leading Phillies did not play on Memorial Day following a seven-game road trip. The team told Herrera, an All-Star center fielder in 2016, not to report to the club while he's on leave.

The Phillies said they immediately reported the incident to Major League Baseball after learning about it Tuesday morning.

"The Phillies take any domestic violence accusation seriously, and strongly support the Joint Domestic Violence Policy agreed upon by MLB and the MLBPA," the Phillies said in a statement.

Manager Gabe Kapler met with the team Tuesday to discuss the incident "because domestic violence is never acceptable."

"Obviously we're not in a position to talk about this specific incident with Odubel, but we are able to talk about it more globally," said Kapler, whose foundation's mission is to prevent domestic violence. "It's unacceptable every time. It's an important enough issue where our players understood and are sensitive and aware enough that it's important to address as a group and to open up the conversation."

Nick Williams was called up and will play left field against the St. Louis Cardinals, who haveright-hander Adam Wainwrighton the mound Tuesday night. Andrew McCutchen will shift to center field. Kapler said Scott Kingery will be an option to play center field against left-handers.