Feminists, environmentalists, peace activists, trade unionists and others demonstrated against the lavish royal welcome being given to a president they see as a danger to the world, chanting "Say it loud, say it clear, Donald Trump's not welcome here."

"I find him scary. My sign is flippant and doesn't say the things I'd really like to say."

A day of protests began with the flying of a giant blimp depicting the president as an angry orange baby, which rose from the grass of central London's Parliament Square.

Protestors flew a "Trump baby" balloon over London when the president visited last summer, too.

One group came dressed in the red cloaks and bonnets of characters from Margaret Atwood's "The Handmaid's Tale," which is set in a dystopian, misogynist future America.

Demonstrators filled Trafalgar Square and spilled down Whitehall, a street lined with imposing government offices, before marching half a mile to Parliament.

Many paused to photograph a robotic likeness of Trump sitting on a golden toilet, cellphone in hand. The robot caught the attention of passers-by with its recitation of catchphrases including "No collusion" and "You are fake news."

"It's 16 feet high, so it's as large as his ego," said Don Lessem from Philadelphia, who built the statue from foam over an iron frame and had it shipped by boat across the Atlantic.

Lessem, a dinosaur expert who makes models of prehistoric creatures, said "I'm interested in things that are big, not very intelligent and have lost their place in history."

"I wanted people here to know that people in America do not support Trump in the majority . and humor is my weapon," he said.

Police erected barricades to stop protesters marching past the gates of Downing St., though the shouts and chants could be heard as Trump met May for talks inside the prime minister's official residence.

Labour Party leader Jeremy Corbyn addressed the crowd, criticizing the "hatreds that are being fueled by the far-right in politics in Britain, in Europe and the United States."

Corbyn declined an invitation to Monday's banquet for the president at Buckingham Palace, but sought a meeting with Trump - which was refused.

"He wanted to meet today or tomorrow and I decided I would not do that," said Trump, calling Corbyn "somewhat of a negative force."

Labour confirmed that Corbyn had proposed a meeting.

Emily Thornberry, Labour's foreign affairs spokeswoman, said Trump was "a sexual predator" and a racist who did not deserve the honor of a state visit hosted by Queen Elizabeth II.

Thornberry told the BBC that the leader of Britain's most important ally should be stood up to "the way you deal with a bully" because "if you bow down in front of them you just get kicked harder."

There were occasional scuffles as some of the protesters confronted small pockets of Trump supporters. Police moved in to separate the groups, and bundled some of the combatants into a nearby pub.

One counter-protester, Lewis Metcalfe, said he had traveled from his home in northern England to show support for the president.

"I'm obviously going to be a minority today," said Metcalfe. "I don't agree with all his policies. He's not the greatest president in the world, but he does get things done."

Trump has dined with the queen at Buckingham Palace, took tea with Prince Charles and held talks with May during his three-day state visit, which ends Wednesday with commemorations of the 75th anniversary of D-Day.

The president said he was delighted with his reception in Britain, and said he had seen only "a small protest ... very small."

He also claimed, exaggeratedly, that there had been "thousands of people on the streets cheering" as he left Buckingham Palace. 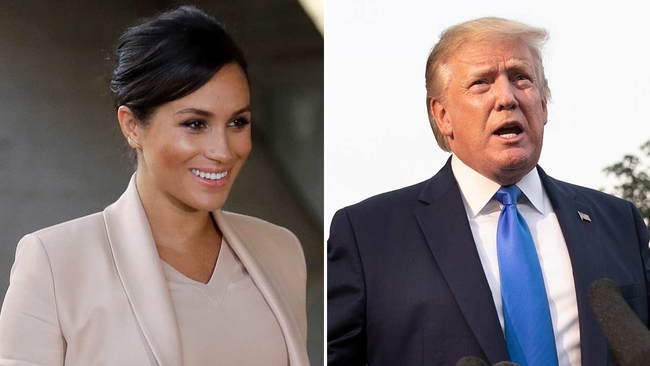