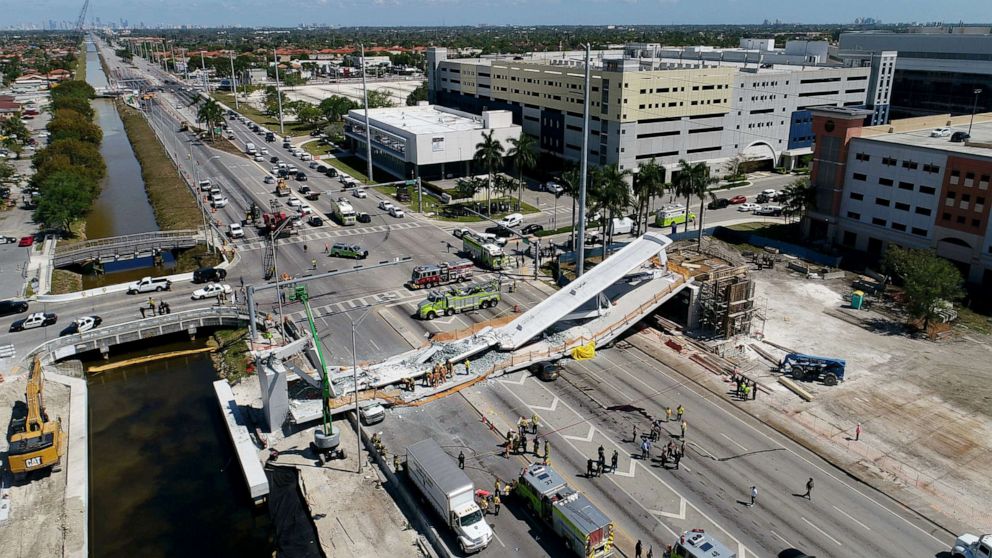 The engineers of the pedestrian bridge that collapsed at Florida International University last year failed to recognize that the bridge was in danger of failing during an inspection juts hours before the accident, according to a new report released by the U.S. Department of Labor's Occupational Safety and Health Administration.

The bridge collapsed at 1:45 p.m. on March 15, 2018, killing a construction worker and five motorists who were waiting at the traffic light underneath the bridge.

The concrete truss on the bridge had developed "numerous wide and deep structural cracks" that jeopardized the integrity of the bridge, according to areport, released this week.

The engineer on record, with the Figg Engineering Group, should have "immediately" instructed that the bridge be shored and that the street below, SW 8th Street, be closed, the report states. The post-tensioning bars were being re-tensioned when the bridge failed.

The bridge was previously touted as an "engineering fear come to life" because it was built using a technique known as Accelerated Bridge Construction. It was intended to provide a safe passage to allow FIU students to avoid the busy roadway while walking from campus to a neighborhood called Sweetwater, where thousands of university students live.

Structural deficiencies during the third stage of construction contributed to the collapse, and the cracks occurred due to deficient structural design, according to the report.

The investigation found that the engineer on record "should have known that the truss was a non-redundant structure and if one diagonal member failed, the entire bridge would collapse," according to the report.

The Figg Engineering Group said the report was factually inaccurate and incomplete in a statement to ABC Miami affiliate WPLG,

"It does not include an evaluation of many important factors pertinent to the construction process leading up to the accident," the statement read. "Additionally, it has not been reviewed by any other entities involved in the accident investigation," the statement said. "At the appropriate time the facts and the truth will be released to the public."

The National Transportation Safety Board is expected to publish the findings of its ongoing investigation later this year, according to The Associated Press.
Report a correction or typo
Related topics:
abc newsnational
Copyright © 2020 ABC News Internet Ventures.
More Videos
From CNN Newsource affiliates
TOP STORIES