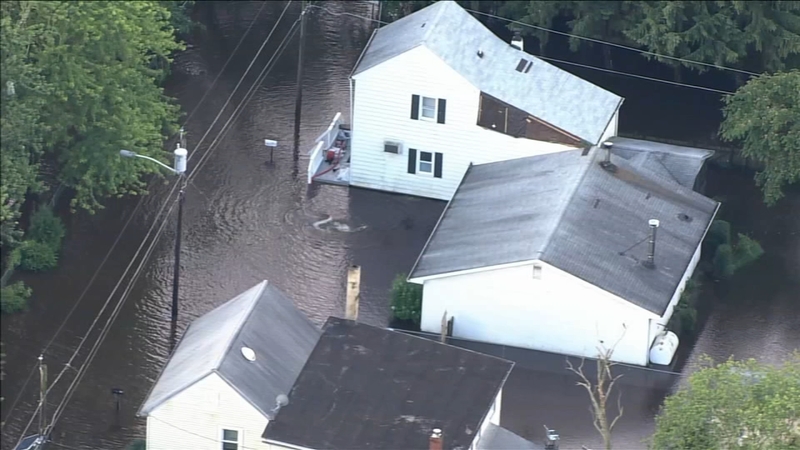 SOUTHAMPTON TWP., N.J. (WPVI) -- Residents across New Jersey are picking up the pieces after heavy rain and flash flooding hit the region.

Governor Phil Murphy has declared a State of Emergency in Burlington, Camden, and Gloucester counties due to severe flooding.

At least a dozen people are displaced in Westville, Gloucester County due to the storm.

Action News visited Diane DiCiano on New Street, and she showed us her basement, and how high the water rose overnight.

Submit your videos and photos to us through 6abc.com/share and they may air on Action News.

Christmas decorations and other belongings were strewn everywhere, soaked and muddy. 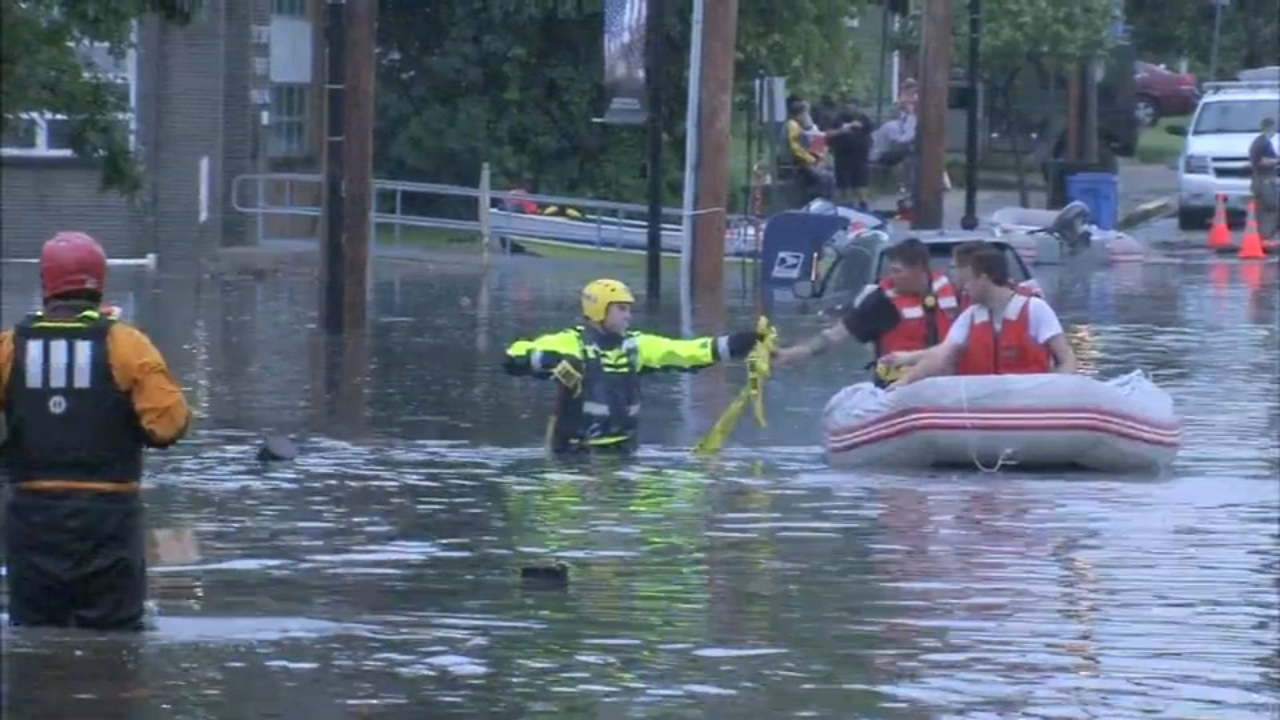 Flooding problems in Westville, New Jersey
Heavy downpours caused drivers to become stranded on highways, people and pets to be rescued from their homes, mass transit service to be shut down, and roofs to collapse throughout the Delaware and Lehigh valleys Thursday morning.

Early Thursday morning, first responders were out in boats, bringing about 60 people and their pets to a Red Cross shelter at the municipal building.

"They were rushed out of their homes due to the evacuation because of the flood. So we're providing them a safe place to stay here at the municipal building," said Laura Steinmetz of the American Red Cross.

About two dozen vehicles at the Dorann Manor Apartment Building were underwater.

"I looked out to the parking lot, there were no cars. They're all underwater. I didn't see the hood of the cars. I saw trunks popped open," said Naomi Knight.

While parts of Macedonia Baptist Church were untouched, the room where summer camp is normally held was a muddy mess, as people worked to mop things up.

Flooding creates traffic nightmare on I-295. Katherine Scott reports during Action News at Noon on June 20, 2019.

Charlie Strano says the flooding was the worst he's seen in 15 years.

"I have 9 inches here," he said measuring the water

Camden County residents cleaning up from flooding as reported by Christie Ileto during Action News at 11 on June 20, 2019.

"In my house is fine but in the basement, I can't even get to the basement. It's all water," said Ruben Pardo of Lumberton, New Jersey.

Many yards in the area are no longer recognizable. Cars are nearly submerged and high rising water nearly covered up mailboxes. The docile Rancocas Creek temporarily morphed into a mighty torrent of water.
EMBED More News Videos

"I mean it happens every once in a while but it rose up pretty fast compared to other years," said David Carbin of Lumberton.

"It's very stressful, as you can imagine," said homeowner Joe McKinney.

Thursday, he, like many spent the day pumping out water from his basement. By dusk, it was time to decided whether it'd be better to stay to go.

Mayor Sean Earlen spent some of the day surveying the damage and working with emergency management officials to ensure the public was informed and out of danger.

"We're expecting the worst is behind us but we're still considering this an active storm," Earlen said.

Drone 6 was over the scene as rescue efforts were being made in Vincentown.

Neighbors like David Carbin are breathing a sigh of relief that their home is dry and spent the day helping pump out water from other homes.

"Trying to stay ahead in the basement just the mechanicals. If you can keep them dry and will go from a nuisance flood to non-catastrophic," Carbin said.

Residents evacuate flooded waters in a canoe in Mount Holly. Sarah Bloomquist has more on Action News at 4 p.m. on June 20, 2019.

This is a flood-prone area and residents say they have been through this before.

Many remember the major flood of 2004. All they can do now is watch the water receded and hope the heavy rain stays away for a while.

"Every flood is probably $80 to $100,000 and we have had four of them. After the third flood you can't buy private insurance. I had to go through FEMA and FEMA is raising the rates 25 percent a year for five years. Last year my flood insurance was $9,000," said Tim Welch of Lumberton.

Lumberton Township officials say no injuries were reported but they remind residents, this is still an active storm and more rainfall is expected.
EMBED More News Videos

Traffic resumes on I-295 after major flooding. Katherine Scott reports during Action News Mornings on June 20, 2019.

"More severe weather is expected in the late afternoon today, so residents are encouraged to keep safety in mind while traveling. Residents are asked to please avoid driving on water-covered roadways, as water levels can be deceptively deep. Water vehicle rescues are dangerous and can be avoided with vigilance," the Burlington County OEM said.

Anthony Luciotti says he's been notified his house on Concord Drive in Haddonfield is ruined. The basement wall caved in against the weight of the flood waters. Now it's been condemned in fear the foundation might totally crumble.

He says it's a lifetime of work ruined.

"I wasn't far from retirement and here I am, starting over I guess," said Luciotti.

His daughter, Dallas' bedroom is right above the wall that gave way around 3:00 a.m. Thursday.

"Here we are no home, no nothing," said Luciotti.

Their neighbors, Jessica and William Vespe, also faced a near death situation.

"I saw the water just gushing from our family room down into the basement and my first thought was to go down and pick some stuff up," said Jessica.

Residents in National Park, NJ dealing with flooding. Sarah Bloomquist has more on Action News at 4 p.m. on June 20, 2019.

But she became stuck when the water broke through the doors.

"Our refrigerator in the basement started floating," she said.

Luckily, she climbed out through the window.