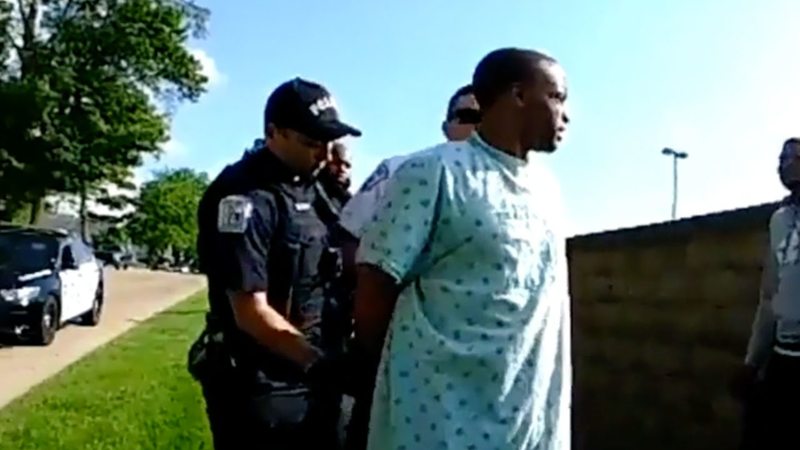 Man claims racial profiling for arrest while attached to IV

FREEPORT, Ill. -- A man says he was racially profiled when he was arrested by police as he walked outside a northern Illinois hospital with an attached IV.

Freeport police on June 9 arrested Shaquille Dukes, his brother and another man for disorderly conduct because of their behavior toward a security officer and police. Authorities say the security guard, who is white, called the police because he believed Dukes was trying to steal the equipment.

Dukes, 24, said he had been hospitalized with pneumonia for two days when his doctor cleared him to go for a walk outside, as long as he didn't leave FHN Memorial Hospital property.

During their walk, Dukes said, he and the others were asked to approach the guard's vehicle, taking him off hospital property.

"I said, 'I explained to you that Dr. Murphy and Jennifer were aware that I came outside -- if you would call and verify with them,'" Dukes told ABC News. He said officers responded: "Well I don't care what they told you. As far as I'm concerned, this is hospital equipment and you're attempting to steal it."

Dukes said his IV was removed after he was arrested, causing him to pass out.

The police department stood by the conduct of its officers, saying in a statement, "Our investigation revealed that at no time did any doctor or nurse give that patient or any patient permission to leave the hospital while still hooked to an IV machine."

"It was determined that he was likely not trying to steal any of the property. The charges were supported for disorderly conduct with their actions toward the security guard," Freeport Police Chief Todd Barkalow told ABC News. "I think that our officers handled it the best way they could and given the situation that they had in front of them."

FHN Memorial Hospital told ABC News that patient privacy laws prevented them on what they said was now a police matter.