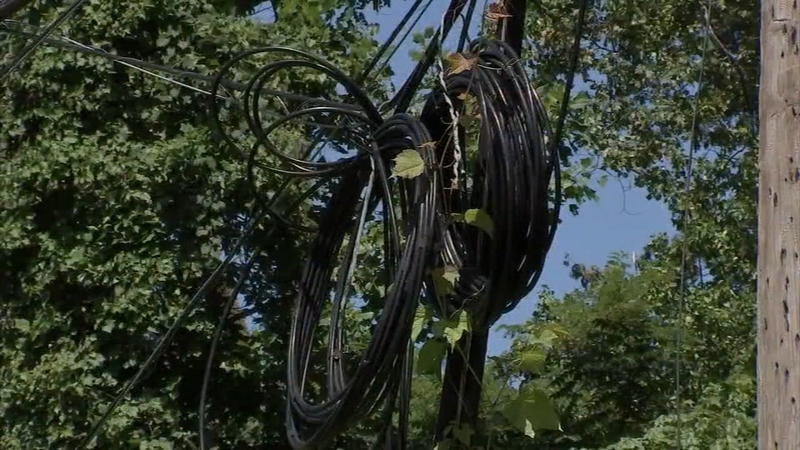 RADNOR, Pennsylvania (WPVI) -- In some places it is a tangle of communication wires and cables that are affixed to utility poles. Some apparently have been abandoned, no longer carrying phone calls or data, while others, say Radnor Township's Manager, appear to be still in use.

Which ever the case, Bob Zienkowski says they present a potential hazard. He says the township has had hundreds of complaints over the years about the problem.

Some of the thick cables that run from utility pole to utility pole sag low to the ground - so low that a person could reach out and grab them. Other wires, usually smaller lines, are cut and left dangling down a pole, in some cases spilling onto the ground.

Zienkowski said some are within the reach of kids. The big concern, he says, is safety. Speaking of the wires he said, "They are near bus stops, around schools, near parks and playgrounds."

Frustrated by what some have described as slow, disinterested response by some cable and phone companies, Radnor commissioners last month modified an ordinance to impose a fee on companies linked to the communication cables and wires that have generated complaints.

The fee for the two largest providers, Comcast and Verizon, would be about $60,000 for each firm. Zienkowski says it would cover the costs of using township workers to make safe the sagging and dangling cables.