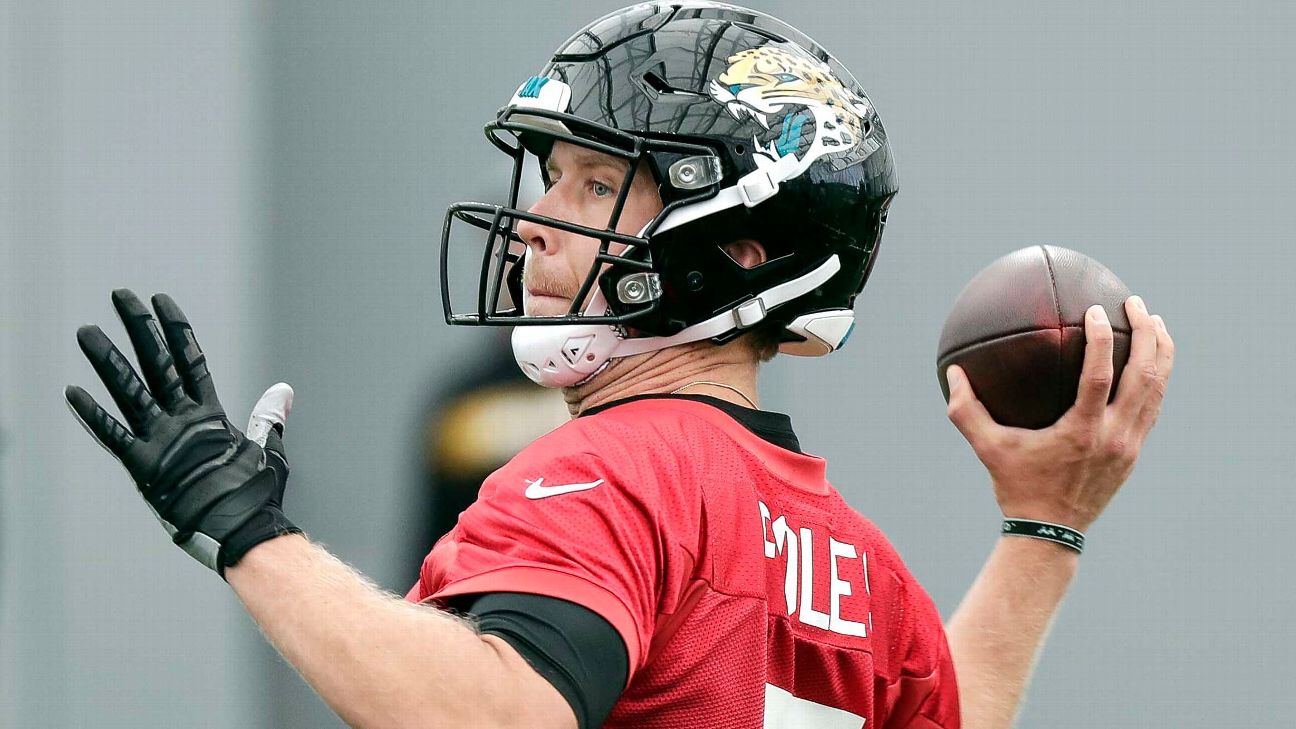 ESPN
By Michael DiRocco
JACKSONVILLE, Fla. -- It doesn't look as ifNick Foles is going to play against his former team Thursday.

Jacksonville Jaguars coach Doug Marrone said Tuesday that he wasn't going to play a lot of starters against Philadelphia, and while he didn't officially rule Foles out, he did say he didn't want to play his quarterback unless he had the starting offensive line healthy and on the field. Three starters are injured and not expected to play against the Eagles.

"I will take a good look at it after [Wednesday] and probably not play some of the players [on Thursday]," Marrone said. "We will play [our starters] the third preseason game. ... I think it's important that you play that game because you are presenting and you want to get the players in the right frame of mind. I hope that I was able to kind of clear these things up. I should have probably done it earlier."

Foles was among 31 players (20 starters) who did not play in the Jaguars' preseason opener this past Thursday. Marrone said that his normal plan is to play his starters about 20 snaps in the second preseason game but that he instead has taken a more cautious approach this year because of the injuries that ravaged the team last season. That included losing No. 1 receiver Marqise Lee for the season with a severe knee injury suffered in the third preseason game. In addition, left guard Andrew Norwell and center Brandon Linder suffered injuries during training camp and the preseason that eventually landed them on injured reserve.

Marrone said he's gotten his healthy first-teamers more snaps in practices during the past two weeks to make up for not playing in the preseason games. Marrone said that he usually has had his starters play about 30 snaps in the third preseason game but that he'll make that determination next week.

"If the third preseason game comes and someone doesn't play, it's probably on the verge of just being cautious," Marrone said.

The Jaguars signed Foles to a four-year, $91 million contract that included a franchise-record $50.125 million guaranteed in March. It's possible his first game snaps with his new team might not come until the regular-season opener against Kansas City at TIAA Bank Field.

"I'm going to leave all of those things up to Coach," Foles said. "All I'm going to do is handle what I can control, and that's coming out here and competing with my teammates, working hard, studying the film, working in meetings and walk-throughs, and whatever he decides, I'll go with."

Foles spent the past two seasons with the Eagles as the backup to Carson Wentz. He replaced an injured Wentz both seasons and led the franchise to a Super Bowl LII victory over New England. Foles was named the game's MVP after throwing for 373 yards and a touchdown and catching a touchdown pass.
Report a correction or typo
Related topics:
sportsespnjacksonville jaguarsnflphiladelphia eaglesnick foles
Copyright © 2020 ESPN Internet Ventures. All rights reserved.
More Videos
From CNN Newsource affiliates
TOP STORIES