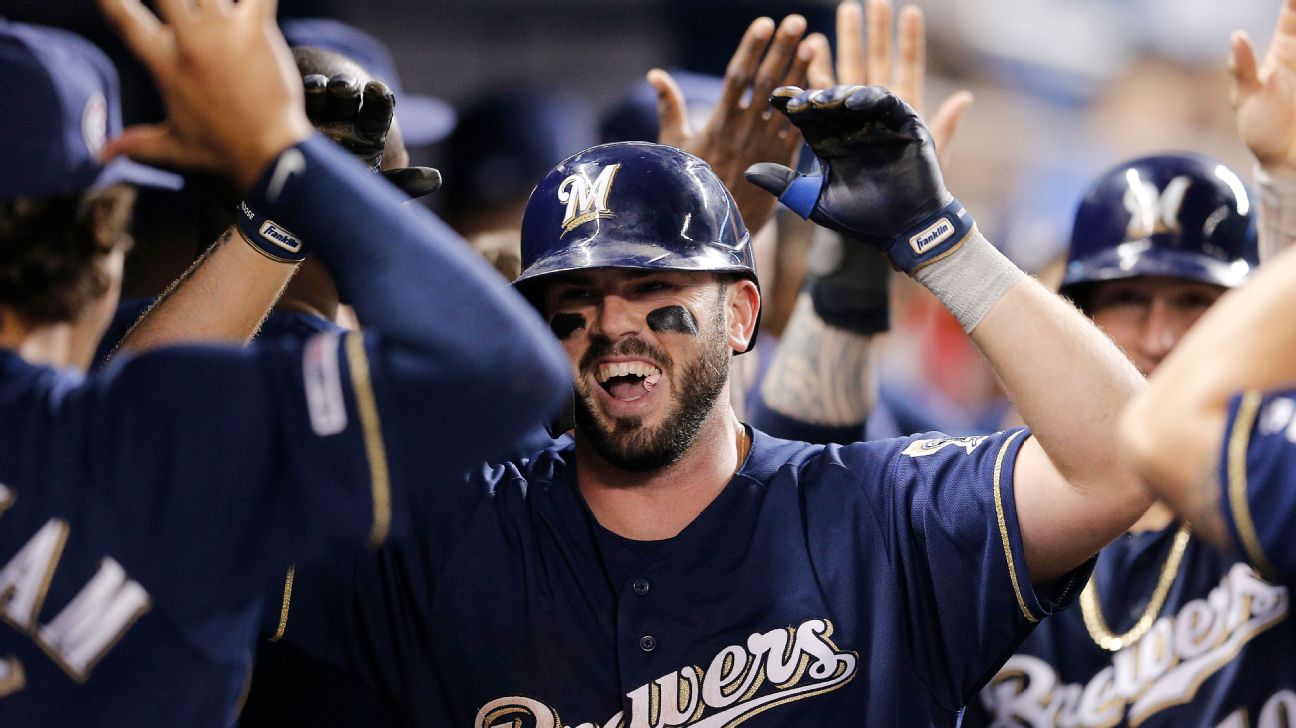 What's left to play for?

The Cardinals' four-game sweep of the Cubs at Wrigley -- just the second time in MLB history that a team lost a four-game series at home with all four losses by one run -- did a lot to clarify what had been a crowded National League playoff race. Here's where we stand:

The Cardinals are three games up on the Brewers, who swept the Pirates and are 10-2 since Christian Yelich went down for the season (11-2 if you include the game Yelich was injured).

The Brewers and Nationals are now effectively tied for the two wild cards, although the Nationals have played two fewer games (they have a five-game series at home against the Phillies, including a doubleheader on Tuesday, while the Brewers have a day off Monday). Both teams are a comfortable four games up on the Cubs and 4 1/2 up on the Mets. The Brewers won the season series against the Nationals, so if the clubs end up with the same record the wild-card game will be played in Milwaukee on Tuesday, Oct. 1.

If the Brewers manage to catch the Cardinals in the NL Central race and they end up tied, the tie-breaker game would be Monday, Sept. 30, at St. Louis (the Cardinals won the season series 10-9).

What about the American League's wild cards?

The Athletics have opened up a two-game lead on the Rays and Indians as they've gone 15-5 in September. They finish with two in Anaheim and four in Seattle. The Rays host the Red Sox on Monday, play the Yankees for two games and finish with three games at Toronto. Cleveland has a six-game road trip against the White Sox and Nationals.

The most likely tiebreaker scenario at this point is the Rays and Indians tying for the second wild card. That tiebreaker game would be in St. Petersburg, since the Rays crushed the Indians in the season series 6-1, outscoring them 41-18.

What's interesting right now is how the two teams' rotations line up, especially now that the Rays have Blake Snell and Tyler Glasnow back (although neither has gone more than three innings yet). Scheduled starts right now for the week are as follows:

Just for giggles, what happens if the Cubs suddenly get hot and force a tie?

The Cubs finish with three at Pittsburgh against the reeling Pirates and three at St. Louis. The Brewers are on the road against the Reds and Rockies, and the Nationals have those five at home against the Phillies and then three against Cleveland. We could get a three-way tie for two wild cards at 88-74 if this happens:

Possible, although unlikely. The Cubs' playoffs odds are down to 2.4 percent, according to FanGraphs. If we do somehow end up in a three-way tie, we go to the three-teams-for-two-spots tiebreaker, which involves designating teams A, B and C. The Brewers have first choice because they won both season series. The Nationals pick second. Club A hosts Club B. The winner is one wild card. Club C would then host the loser of the first game for the second wild card.

What's going on with the Yankees?

It's a never-ending story for the Yankees, and now Domingo German is out for the postseason because ofa domestic violence investigation. Giancarlo Stanton returned to the lineup last week for his first action since June and played four games, homering on Saturday and going 4-for-10 overall. But the biggest news is that Luis Severino returned and looked very sharp in two outings. He threw four scoreless innings against the Angels and followed that up with five scoreless innings against the Blue Jays on Sunday, striking out nine with zero walks and throwing 80 pitches.

He looks ready to go in the playoff rotation along with James Paxton and Masahiro Tanaka, so only the fourth spot remains a question mark. A possible tandem outing with German is no longer in the works.J.A. Happstruggled in August, but he has the hot hand in September, with four runs in 23 1/3 innings this month. With Paxton in top form (he's allowed one earned run in September), Severino healthy and Happ looking better, the Yankees may actually be entering October in the best spot they've been at all season. Gleyber Torres did miss a couple games after tweaking his knee Friday night and Edwin Encarnacion has been out since Sept.12, but both are expected back this week. Catcher Gary Sanchez (groin) has been taking indoor batting practice, and the Yankees hope he'll be ready for the ALDS.

Any other injuries to watch?

Freddie Freeman is going to remain in Atlanta to get treatment for a bone spur in his right elbow as the Royals travel to Kansas City for a two-game series. Freeman has played through the issue for a few weeks and has hit .288 in September, although with just two home runs.

Twins outfielder Max Kepler hasn't started since Sept. 14 because of a strain in his left shoulder.

Justin Turner finally returned to the Dodgers' lineup on Saturday after missing 13 days with a nagging ankle injury. Teammate Max Muncy sat out Saturday and Sunday with a sore thigh, but manager Dave Roberts said he would have played if it were a postseason game.

Nationals catcher Kurt Suzuki hasn't been able to catch since Sept. 7 due to elbow inflammation.

Jose Ramirez could be back in the Cleveland lineup Tuesday.

A's reliever Blake Treinen is out for the rest of the regular season with a stress reaction in his back. Fellow reliever Lou Trivino hasn't pitched since Sept. 14 due to an oblique strain.

Who is Houston's No. 4 starter?

Wade Miley was having an excellent season heading into September, ranking in the top 10 in the AL in ERA, but he's allowed 23 hits and 18 runs over 7 1/3 innings in his past four starts -- including three outings in which he lasted no outs, one out and three outs. Can A.J. Hinch have any confidence giving him the ball in the postseason? He'll have one more start this week to turn things around.

The Astros don't really have a fifth starter at the moment, so it's Miley or some sort of bullpen game. The Astros could elect to go with a three-man rotation in the division series, which would entail the Game 1 starter pitching Game 4 on three days' rest. No doubt Justin Verlander will get the ball in the playoff opener, but asking him to go on short rest is asking him to do something he hasn't done since pitching 2 2/3 innings in relief in Game 4 of the 2017 ALDS. The only postseason game he started on short rest in his career was in the 2011 ALDS, but that was after pitching one inning in a rainout.

What's going on with the MVP races?

We're kind of where we were last week. Alex Bregman hit three home runs and drove in four runs as he continues to put some doubt in what looked like a Mike Trout lock before Trout went down for the season. Bregman is at .293/.419/.585 with 39 home runs, 117 runs, 108 RBIs, 112 walks and good defense.

Over in the NL, Anthony Rendon did not have a good week, hitting .167 with one home run and two RBIs as the Nationals went 3-3. They haven't had a three-game winning streak since Sept. 1. Cody Bellinger hit two homers and knocked in six runs. It still feels like Bellinger has the slight edge (and it's worth noting that Yelich does have a small lead in FanGraphs WAR).

How about the Cy Young races?

The battle between Justin Verlander and Gerrit Cole will go down to the wire. Verlander won his 20th game on Sunday, improving to 20-6 with a 2.53 ERA and 288 strikeouts in 217 innings. Cole is 18-5 with a 2.61 ERA and 302 strikeouts in 200 1/3 innings. He's riding a string of seven consecutive double-digit strikeout games. Cole is scheduled to pitch on Tuesday and then in a final tuneup start on the final day of the season, while Verlander has just one start remaining. Verlander, however, has already made two more starts and has those 17 additional innings. Edge: Verlander.

I don't know if Jacob deGrom has completely separated himself from the pack, but don't blame him when the Mets fall short of the postseason. He has the most well-rounded season of dominance among NL starters, with a 10-8 record, 2.51 ERA and 248 strikeouts in 197 innings. He's second in the NL in ERA (Hyun-Jin Ryu is at 2.41, but has pitched 21 fewer innings), first in strikeouts, third in innings, first in lowest OPS allowed, and he has finished strong (he owns a 1.55 ERA in the second half).

Any other milestones/races to watch?

Yes! Pete Alonso has 50 home runs and is two away from tyingAaron Judge's rookie record. He also has a two-homer lead over Eugenio Suarez for the major league lead. Three Mets have led the NL in home runs -- Howard Johnson, Darryl Strawberry and Dave Kingman -- but no Mets player has led the majors.

Tim Anderson of the White Sox leads DJ LeMahieu in the AL batting race, .334 to .329. If Anderson wins, his .258 career average entering 2019 would be the lowest ever for a batting champ at the start of the season. LeMahieu is trying to win the title in both leagues after leading the NL with a .348 average with the Rockies in 2016.

Jorge Soler is tied with Trout for the AL lead with 45 home runs. Trout is out and Soler has a five-homer lead over Nelson Cruz. He's trying to become the first Royals player to lead the AL in home runs.

The NL batting race is interesting because the co-leaders are Yelich and Ketel Marte of the Diamondbacks at .329, but both are out the rest of the season with injuries. Yelich has the edge in going to a fourth decimal point: .3292 to .3286. Rendon is third in the race at .325.

Then there's my favorite stats chase of the season: Nicholas Castellanos of the Cubs has 58 doubles as he tries to become the first player since 1936 to reach 60 doubles.

CC Sabathia said goodbye to Yankees fans with a ceremony on Sunday, wiping away tears more than once. Sabathia is expected to make the Yankees' postseason roster, although he may be limited to a relief and/or mop-up role.

Felix Hernandez's contract is up in Seattle, and he'll make one final start at home on Thursday. He will finish his 15 seasons in Seattle without a playoff appearance, and while he hasn't announced his retirement, this will be his final game in a Mariners uniform. If he pitches in 2020, it will be somewhere else. With a 6.51 ERA, the phone won't be ringing off the hook.

The Red Sox finish at home against the Orioles. Could these beMookie Betts' final games with Boston? He has one year remaining until free agency, but the trade rumors around him are already heating up as the Red Sox may look to deal him in the offseason.

The last game of the season in San Francisco against the Dodgers promises to be an emotional affair. It will be Bruce Bochy's final game as manager, after 13 seasons and three World Series titles. Next stop: Cooperstown. The scheduled starter that day: Madison Bumgarner, a free agent. Next stop: Who knows? 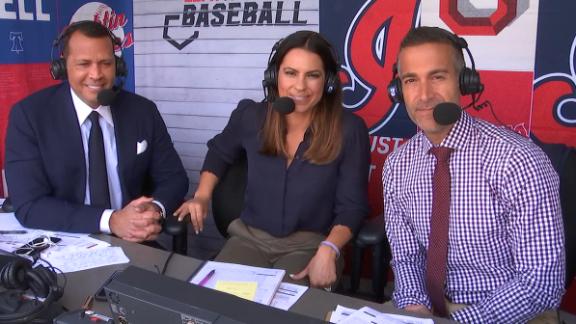