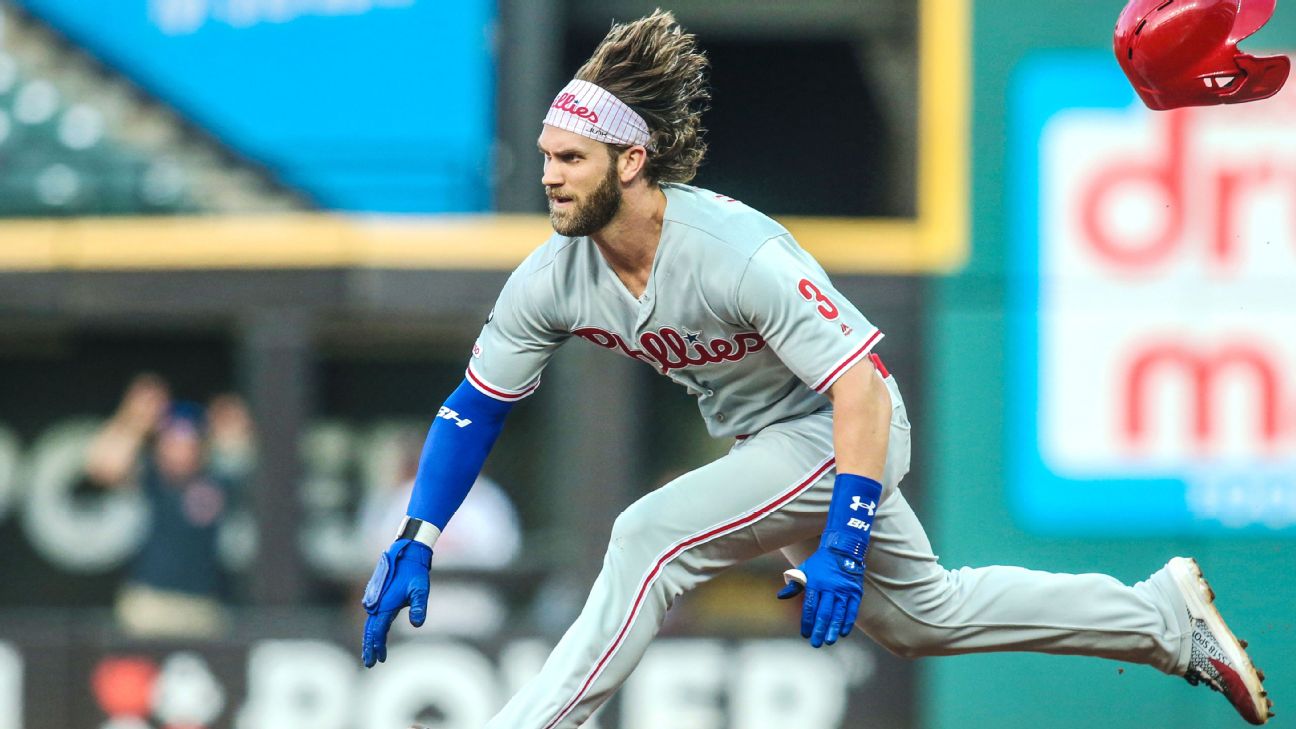 All winter, the baseball world tracked the free agency of Bryce Harper and Manny Machado, with the two stars eventually settling in Philadelphia (13 years, $330 million for Harper) and San Diego (10 years, $300 million for Machado).

So how did the first years in their new homes work out? Do their teams have buyer's regret? And what do their futures look like? We asked ESPN baseball writers Eddie Matz, Sam Miller and David Schoenfield to weigh in.

What grade would you give Bryce Harper for his first year in Philly?

Eddie Matz: He has stayed healthy, which is a win. He's hustled, which is another W. And his defense has been way better than it was last year, probably because he was less concerned about getting hurt heading into free agency and more concerned with impressing a new fan base. But that's not why you pay Bryce Harper. You pay Bryce Harper to crush baseballs and put butts in seats. He currently has an OPS-plus of 123 (below his career average of 136), but attendance is up nearly 30% in South Philly. As a former high school math teacher (in Philly, no less), I feel comfortable giving Harper a B-minus.

Miller: Just Year 1? Not what Year 1 says about Year 2, or Year 13, but just Year 1? I'd give it an A-minus. He's seventh in the majors in win probability added, thanks to the highest clutch score in the National League. That's certainly not a skill the Phillies should bank on, but it means that, in clear and demonstrable ways, Bryce Harper did a ton to help the Phillies win this year. The rest of the Phillies were the problem.

Schoenfield: Harper's clutch numbers have been very good and he did very well against the first-place Braves, slugging .606 with seven home runs against them. His OPS+ is the same as Ronald Acuna Jr.'s, and Acuna might finish in the top five of the MVP voting. On the other hand, he's only 43rd in the majors in OPS, behind Trey Mancini, Hunter Dozier and Bryan Reynolds, and his 3.6 WAR ranks tied for 60th among position players. Even with extra credit for clutch performance, I can give him only a B.

What has surprised you most about Bryce's first year in Philly?

Matz: That he didn't make the All-Star Game. I have no clue what the odds on that would've been prior to the season, but I'm guessing it would've been roughly equivalent to the odds of a rookie hitting 50 home runs.

Miller: That the Phillies have been as bad around him as they have been. The Astros and Cubs made tanking to win look so inevitable, especially for a big-market team, but the Phillies have made it look like a huge gamble: They're two full years out of the trough, they made all the go-for-it moves, they've drawn down the value of the farm system they built, and they're still only a .500 team with a negative run differential and no real teamwide strengths. One could imagine them getting much better next year. One could also imagine Harper spending the next half-dozen years wondering whether he made a big mistake turning down the Dodgers so he could permanently attach himself to this organization.

Schoenfield: How little we've spent talking about him on a national level. The Phillies were in first place through early June, but Harper didn't hit that well the first two months (he was at .227/.355/.438 on May 26). Harper's best month was August (11 home runs, 1.025 OPS), but the Phillies went just 13-14 that month and kind of fell out of the race as the Braves surged. After the first few weeks, Harper was simply never in the regular discussion as one of the most riveting players of the season.

What does Bryce's first year with the Phillies say about the next 12?

Matz: It says that if the Phillies plan on being regulars in the postseason, then given what's going down in The Dirty (i.e., the success of the young Braves), they'd better get used to the whole wild-card thing.

Miller: The best thing it says is that his glove isn't a liability, as it looked like a year earlier. His defense in 2018 was disastrous, according to various advanced metrics, but has been somewhere between slightly above average and well above average this year. We all know that you sign a player like Bryce Harper hoping he hits 50 home runs, but the real threat to his value was that his defense would stay collapsed and he'd start every season needing to hit like an MVP to have value.

Schoenfield: It's looking more and more like his age-22 MVP season was a complete outlier and that even his very excellent injury-shortened 2017 season was a bit of an outlier. He's a good player who gets on base and hits some home runs (so did everybody in 2019), but the strikeout rate continues to rise and he has had one elite offensive season in the past four. Bottom line: He may be the straw that stirs the drink, but I'm not sure he's the best player on a playoff team anymore.

What grade would you give Manny for his first year in San Diego?

Matz: During Machado's first few seasons in Baltimore, he suffered two knee injuries and had the look of a star-crossed talent whose career could be torpedoed by health issues. But since 2015, nobody in baseball has played more games than Manny. That includes another 147 this year. So at least the Padres have been able to count on their $300 million man posting up. Beyond that, Machado's OPS+ is currently 106, which is depressingly close to league average (100). Some of that has to do with leaving Camden Yards, but still. And Machado's defense -- which is supposed to be his calling card -- has been good but not great. I'm issuing a C-plus.

Miller: B. Machado always looks terrifying at the plate, but he has really been great as a hitter for only three years, out of eight, and never transcendent. I keep waiting for him to turn into a 1.000 OPS player -- he was still only 26 for most of this season -- but he keeps gravitating toward the high .700s. His defense still makes him very valuable, a star, but the odds that he'll never win an MVP award are increasing.

Schoenfield: I miss the younger Machado, who sprayed line drives all over the place and played third base like Brooks Robinson. He has morphed into too much of a one-dimensional hitter (the player who once hit 51 doubles has hit just 20 this year) and that one dimension -- home runs -- doesn't play as well in San Diego as it did in Baltimore. He's still above average in the field, but he has lost a step from his all-world days when he first came up. Besides that 106 OPS+, he also leads the NL in double plays grounded into. Meh. C-plus.

What has surprised you most about Manny's first year with the Padres?

Matz: The freakishly low number of doubles. For a guy who led the American League in two-baggers his first full season and has always been a big doubles guy, 20 almost looks like a typo. But it's not. As of Wednesday night, of the 51 players who had at least 600 plate appearances, Machado had the fewest doubles of anyone. You might not think that's important, and truth be told, I'm not sure that I do, either. But it's definitely surprising.

Miller: That, within maybe three months of his first game as a Padre, it was clear that he's not the best player on the team; Fernando Tatis Jr. is. That's good. Machado is a great player, but we've seen that even Mike Trout can't carry a team all by himself. And Machado is no Mike Trout. (Tatis might almost be.)

Schoenfield: I attributed the slow start in April to the new team, big contract, trying to do too much and so on. When he had a monster June, it appeared he was finally settling in and would once again be one of the best all-around players in the game. But he has totally gone in the tank the final two months. In fact, he has been so awful you can hope he's been playing through some nagging injuries or something. Because if he simply has lost focus and interest because the Padres were out of it, that's not a good sign.

If given the chance for a do-over, do you think the Padres would still sign Machado for $300 million?

Matz: Sure. In the seven months since San Diego inked Machado, nothing has really changed inside the front office. So I have no reason to believe that Padres brass wouldn't make the same decision again.

Miller: Probably. Machado's future looks a little less promising now than it did 12 months ago, but the Padres' future looks really strong. They're going to be in good-player-collection mode for the next few years, and it's not as easy to get those good players as we sometimes assume. The Padres' outlook, at least for the next five years or so, is stronger because Machado is on the team.

Schoenfield: I think so. He's durable, plays good D and hits home runs. He was a 5.7-WAR player as recently as 2018 and next year he'll be just 27, so there's no reason he can't bounce back and be a 5-6-WAR player for several seasons to come.

Who ya got, Manny or Bryce?

After one year for the duo in their new homes, which of the two mega-contracts do you think will prove to be a better deal?

Matz: According to FanGraphs, Machado's WAR (2.8) is a full win lower than Harper's (3.8). Using the average annual value of their contracts, the Padres are paying $10.7 million per Manny win, while the Phils are dishing out $6.7 mil per Bryce victory. San Diego's attendance hasn't spiked nearly as much as Philly's. However, the Padres' TV ratings over the first half of the season were up 81%, best in the majors. And we all know that's really where the money is. But, as the commercials say, past performance is no guarantee of future results. So I'll just go with my gut and say ... Nolan Arenado.

Miller: As Bryce Harper said at his introductory news conference, "You're always remembered for winning." At the time, I thought the Phillies were positioned to be really strong for a half-decade. Now I'm not sure. I wasn't sure the Padres were, but now I'm pretty confident. I think Machado's signing will be a better deal, because I think it'll end up covering more playoff appearances -- at least, during the players' peak seasons.

Schoenfield: I think Sam nailed it. The Phillies were in win-now mode and the Braves absolutely crushed them. The Braves are younger, have more stars, more payroll flexibility and a better farm system. The Padres have to deal with the powerhouse Dodgers, but I would take their next five years over Philly's and I think Machado is the better bet to produce more WAR over the next five seasons.

Which player do you think will play a playoff game with his new team first -- and when?

Matz: Tie. The Padres and Phillies will face each other in the 2021 NL wild-card game.

Miller: I like the Padres to make another big move this offseason, to benefit quickly from their still-elite farm system, to have an MVP candidate in Tatis next year, and to clinch a wild-card spot in approximately 368 days.

Schoenfield: The Padres still have some major holes to fill on offense -- they don't score enough runs because they're last in the NL in batting average, last in strikeouts and 13th in OBP -- and I don't yet have confidence that they've proved they can develop all this young talent as successfully as, say, the Dodgers have with their young talent. But Tatis is a stud and there is talent to groom. So I'll say the Padres win a wild card ... in 2021. (Or 2020 if they hire Joe Maddon to replace Andy Green as manager.) 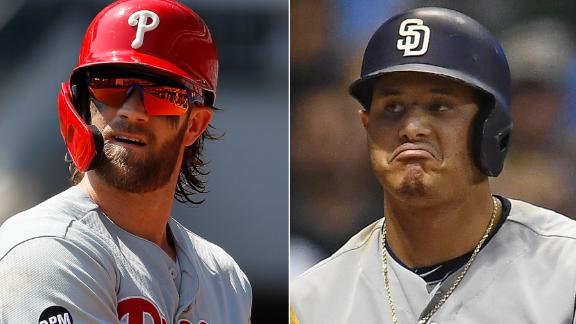