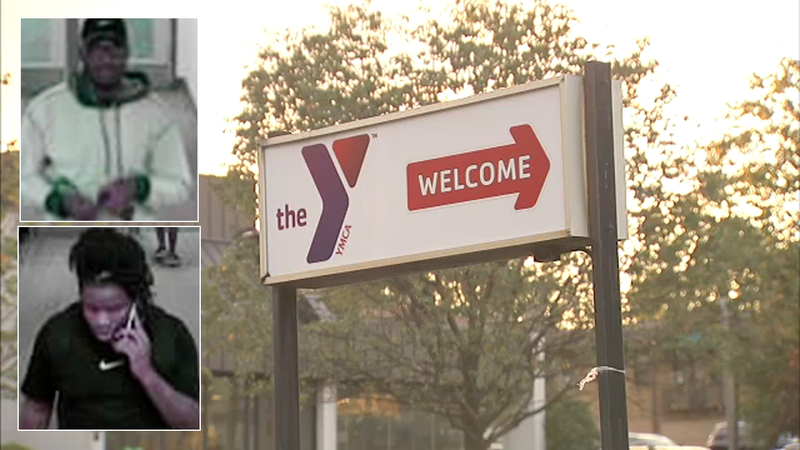 UPPER DARBY TWP., Pennsylvania (WPVI) -- Some brazen bandits had quite a workout after targeting a fitness club in Upper Darby, Pennsylvania.

Members of the YMCA at Lansdowne & Garrett were startled to hear that bandits were targeting lockers for valuables.

"I was not aware that any of this was happening," said YMCA member Jeanette Padilioni of Lansdowne.

"They're like rats, the perpetrators are like rats. They go in there quick, they know what they're doing and they get out," said Upper Darby Police Superintendent Mike Chitwood.
Police say two men somehow sneaked into the YMCA when nobody was looking and broke into a few lockers.

One man was swimming when the thieves broke into his locker, making off with his wallet, cash and credit cards.

Then to stall the victim, they changed the lock on his locker.

The baddies then hurried off to a CVS a half-mile away at Lansdowne and State and hooked up with a woman in a red top. There they used the man's credit card to make $2,000 in purchases.
"They buy $2,000 worth of other credit cards," said Chitwood.

They then went to a Chipotle in Springfield to have a nice dinner where they conjured up the notion of going out to buy $2,000 worth of more gift cards. But by then, the owner had the people at the YMCA break the lock that was intended to stall him and he canceled his credit card before they could do any more damage.

"The ingenuity is amazing, but the crime is sad and sick," said Chitwood.

Yvonne Frazier says it's because of criminals like this that she doesn't take her valuables into the gym and warns others not too as well.

"I tell them don't bring no valuables in here, leave your stuff in the trunk of your car, you won't have nobody trying to break in," said Frazier