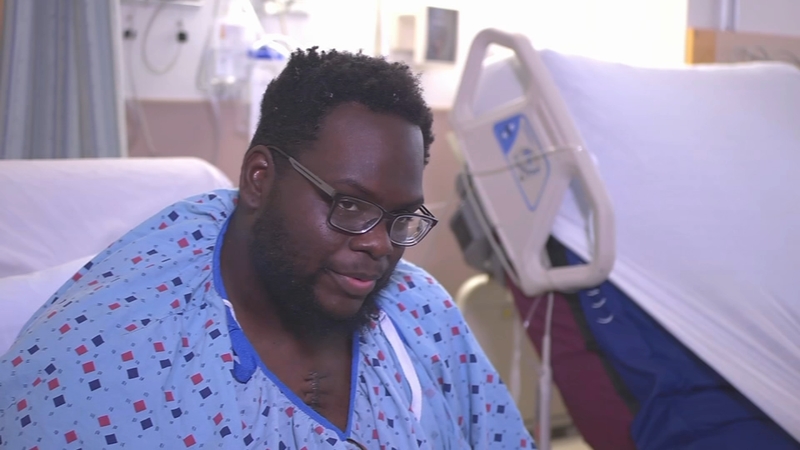 NORTH PHILADELPHIA (WPVI) -- Philadelphia has some of the top medical centers, many offering specialized treatments not available in other cities.

A 30-year-old dad from Washington, D.C. is on the road to recovery because his doctors knew who to call.

"Got real lightheaded and dizzy and passed out and came to, my coworkers asking me if I wanted them to call 911," Donte told Action News.

At the hospital, doctors discovered a major blood clot in his lung.

He developed an allergy to the usual intravenous blood thinners, and doctors said standard surgery was too risky....

Meanwhile there were signs of more complications.

The blood clot was causing high blood pressure within the lungs, putting tremendous strain on the heart.

"When they did the ultrasound on his heart they saw that the right side was three times the size it needed to be," said Donte's wife Amber.

The doctor in D.C. knew Temple Health had a specialized CTEPH surgery, he put the wheels in motion, telling Donte's wife -

"If we don't get him to Temple, I'm afraid he could die tonight," she told us.

Diagnosing CTEPH before it's too late.

Donte made it to Philadelphia, and underwent the very complex procedure, cooling his body and at times even stopping his heart so surgeons could get to the clot.

"So this is surgical removal of blood clots that are stuck within the lung often times for months or years," said Dr. Paul Forfia, co-director of the Pulmonary Hypertension, Right-Heart Failure & CTEPH program at Temple Health.

Now, Donte is heading home, eager to see the 4-years-old son he hadn't seen in a month.

"If you all could have seen his reaction when the doctor came in and said we're letting you go today... it was like he's leaning back in the chair sleeping, jumped up like yes I am ready to go, get me home," said Amber Lyde-Weems.

The condition is considered rare but doctors at Temple say it may be going undiagnosed for some people.

Dr. Forfia's advice: "Any patient who has had a pulmonary embolism, and is short of breath beyond the fist three months on standard blood thinner therapy," get checked for CTEPH.