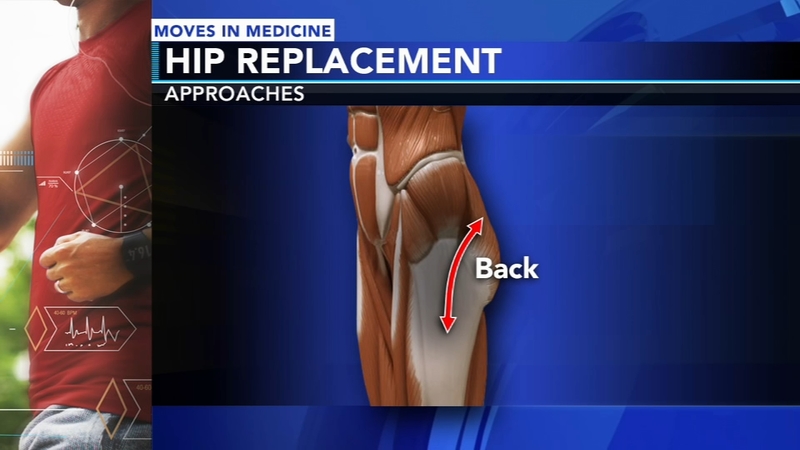 NORTH PHILADELPHIA (WPVI) -- Joint replacements are one of the most common operations, done more than a million times a year in the U.S.

The techniques surgeons use are evolving, including those for the hip, making the prospect of getting a new one less daunting than in years past.

The Piano Man Billy Joel has had his replaced. So has former Sixers great Charles Barkley.

And even actress, fitness guru, and activist Jane Fonda has had both hips replaced!

As Americans who were active in their youth expect to keep going into later years, the demand for hip replacements is rising.

For decades, surgeons put the new joint in through an incision toward the back of the hip, or an incision on the side.

In recent years, a front - or anterior - approach is being used more and more.

"It can typically be a smaller incision," says Dr. Julie Shaner of Temple Health.

"You actually use a natural interval or playing that occurs between two separate muscles so that you kind of go-between them as opposed to through them or lifting them off," explains Dr. Shaner.

Less trauma translates to a jumpstart on recovery.

"There's no long-term difference, but at least in the initial recovery period, which is incredibly important for most patients, they see a little bit quicker recovery, as far as decreased pain, shorter length of stay," she notes.

Patients can go home a day or two after surgery.

"Some folks, depending on their age and other medical health conditions are even going back to work within the first one or two weeks," Dr. Shaner says.

While that won't be possible for every patient, she says the vast majority will get back to normal activities sooner than in the past, with less pain and a better quality of life than they've had in years.
Report a correction or typo
Related topics:
health & fitnessmoves in medicine temple
Copyright © 2021 WPVI-TV. All Rights Reserved.
More Videos
From CNN Newsource affiliates
TOP STORIES