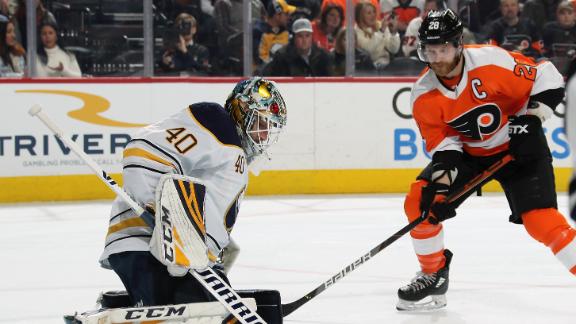 PHILADELPHIA -- The Flyers are still streaking. And they have Carter Hart to thank for that.

Hart made 38 saves, including some brilliant stops during Philadelphia's lackluster first period, and Claude Giroux scored twice to lead the Flyers to their ninth straight victory, 3-1 over the Buffalo Sabres on Saturday night.

"Carter Hart was the best player on the ice," Flyers coach Alain Vigneualt said. "Our other 18 guys were OK. Our goaltender had his best stuff and that was the difference."

Joel Farabee also scored and Jakub Voracek and Travis Sanheim each had a pair of assists for Philadelphia, which remained tied for first place with Washington in the Metropolitan Division. The Capitals beat Pittsburgh 5-2 earlier Saturday.

Philadelphia improved to 25-5-4 at home, where Hart has been nearly unbeatable. The 21-year-old netminder upped his home mark to 20-2-2.

"Having fun," Hart said. "That's probably the biggest thing with us right now. We're enjoying coming to the rink."

Dominik Kahun scored for Buffalo, which dropped its sixth straight. The Sabres have gone six games without a point for the first time since Dec. 28, 2015, to Jan. 8, 2016.

Buffalo dominated the opening period, and could've been up at least two goals if not for Hart. He stopped Sam Reinhart on a breakaway six minutes in and then made two good saves off a 2-on-1 about 4 1/2 minutes later, first on Johan Larsson's slap shot and then Zemgus Girgensons' follow from close range.

"Carter made some huge saves for us," Giroux said. "And when we had a chance to put it in, we did."

Giroux's second goal of the night, which put Philadelphia ahead 2-1 with 10:32 left, was one for the highlight reel. Voracek's pass went off the stick of Buffalo defenseman Jake McCabe and into the air. Giroux wound up and connected just as the puck was landing on the ice, firing it past the left leg of goalie Carter Hutton for his 21st of the season.

"It was in the air and I was waiting for it to land," Giroux said.

Farabee made it 3-1 with 5:11 remaining after a gaffe by the Sabres. Buffalo defenseman Rasmus Ristolainen passed back to Hutton from inside the defensive zone. Farabee pressured the goalie, intercepting Hutton's attempt at a return pass to Ristolainen before shooting between Hutton's legs.

Farabee was recalled Thursday from Lehigh Valley of the AHL to fill in for injured James van Riemsdyk (broken hand).

"If he doesn't forecheck hard, he doesn't score," Giroux said. "He hustled for the goal."

It was a great break for the Flyers, and the kind teams on winning streaks get.

Meanwhile, the Sabres played well but only had another defeat to show for it.

"The fight was there, the effort was there, we liked so many things we saw, but we sure don't like the result," coach Ralph Krueger said. "We need to get some fruits from all this labor."

Buffalo star Jack Eichel extended the longest drought of his five-year career to seven games without a point.

"We really put ourselves in a position to break their winning streak," Krueger said. "But they're on a roll. They're playing excellent hockey. Very confident team. They didn't need much, and compliments to them that they kept their streak alive."

Giroux opened the scoring midway through the second period. Voracek also set up that goal with a pass across the crease. Giroux corralled it with his skate and then backhanded the puck just under Hutton.

Buffalo tied it with 3:06 left in the second when Kahun scored after a stellar pass from Victor Olofsson, who faked a shot and then dished to a wide-open Kahun to the right of the crease.

Game notes
The Flyers face the Eastern Conference's top two teams in their next two games, at home against the Boston Bruins on Tuesday and at Tampa Bay on Thursday. Philadelphia's last loss was Feb. 15 at the Lightning. . Buffalo D Lawrence Pilut (illness) didn't play. . Van Riemsdyk missed his second straight game. He is expected to miss four to six weeks. . Philadelphia leads the season series 2-0. The teams play for the final time April 4 in Buffalo.

Buffalo: At Washington on Monday night.