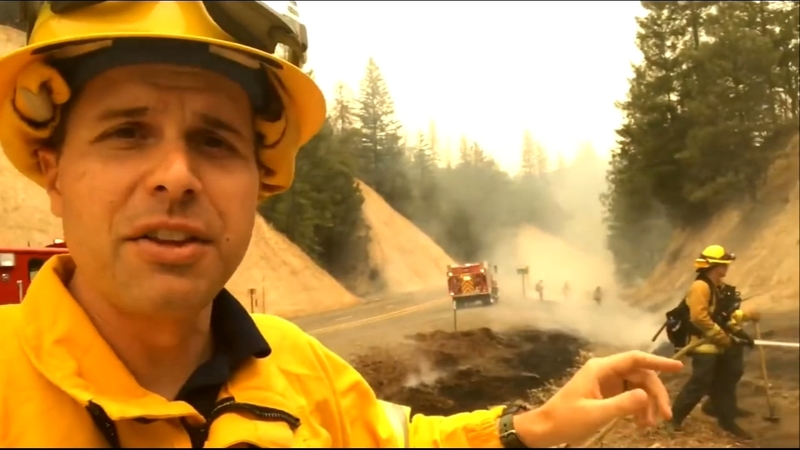 REDDING, Calif. -- The deadly Northern California wildfire that has forced tens of thousands of people to flee their homes burned virtually unchecked Sunday as fire crews surveyed a small town that was reduced to an ashy moonscape of blackened trees and smoldering rubble.

The death toll climbed to six, and authorities worried that another forecast for high winds could fan the flames even further.

"Right now, it's going everywhere. We still have a lot of open line," said Anthony Romero, a spokesman for the California Department of Forestry and Fire Protection. "Any event could bring this back up again."

Keswick, a mountain town of about 450 people, was almost completely wiped out. The San Bernardino County Fire Department was called in to tamp down smoking piles of debris that were scattered amid downed electricity lines.

"What we're seeing here is an incomplete burn situation," Capt. Doug Miles said as his crew used picks, shovels and rakes to open up piles that just days ago were family homes. The flames laid waste to about 25 blocks, and the "mop up" work was likely to take days. He said his crew would be looking for anything salvageable, but there was little left standing.

Anna Noland, 49, was evacuated twice in three days before learning through video footage that her house had burned. She planned to stay at a shelter at Simpson College in Redding while searching for another place to live.

"I think I'm still in shock," Noland said. "It's just unbelievable knowing you don't have a house to go back to."

Noland was among the 38,000 people who evacuated after the so-called Carr Fire roared into the outskirts of Redding in Shasta County. The fatalities included two firefighters and a woman and her two great-grandchildren.

"My babies are dead," Sherry Bledsoe said through tears after she and family members met Saturday with sheriff's deputies.

Her two children, 5-year-old James Roberts and 4-year-old Emily Roberts, were stranded with their great-grandmother, Melody Bledsoe, 70, when flames swept through the family's rural property Thursday on the outskirts of Redding.

The sixth victim, who was not identified, did not evacuate despite receiving an evacuation warning, Shasta County Sheriff Tom Bosenko said Sunday.

A vehicle problem ignited the fire July 23, but it wasn't until Thursday that the blaze exploded in size and raced into populated areas west of Redding before entering city limits.

On Saturday, it pushed southwest of Redding, the largest city in the region, toward the tiny communities of Ono, Igo and Gas Point. The fire grew slightly Sunday to 139 square miles (360 square kilometers).

It is the largest fire burning in California, threatening more than 5,000 structures. The flames were just 5 percent contained.

The latest tally showed at least 517 structures destroyed and another 135 damaged, Romero said. A count by The Associated Press found at least 300 of those structures were homes.

The firefighters killed in the blaze included Don Ray Smith, 81, of Pollock Pines, a bulldozer operator who was helping clear vegetation in the path of the wildfire. Redding Fire Inspector Jeremy Stoke was also killed, but details of his death were not released.

Bledsoe's relatives were among more than a dozen people reported missing after the furious wind-driven blaze took residents by surprise and leveled several neighborhoods.

The sheriff said he expects to find several of those people alive and just out of touch with loved ones. Officers have gone to homes of several people reported missing and found cars gone - a strong indication they fled.

Wildfires around the state have forced roughly 50,000 people from their homes, said Lynne Tolmachoff, a Cal Fire spokeswoman.

About 12,000 firefighters were battling 17 significant fires Sunday in California, she said.

"We are well ahead of the fire activity we saw last year," she said. "This is just July, so we're not even into the worst part of fire season."

Authorities also issued evacuation orders in Napa County, famous for its wine, when a fire destroyed eight structures. The blaze had blackened 150 acres but was 50 percent contained on Sunday.

Yosemite Valley remained closed to visitors and will not reopen until Friday.