WPVI
NEW YORK -- Senate Majority Leader Mitch McConnell drew fire from the governors of New York and New Jersey when he took a hard line on the coronavirus- stricken, cash-starved states by suggesting they should consider bankruptcy.

"We're going to take a pause here, we're going to wait ... and clearly weigh before we provide assistance to states and local governments," McConnell said Wednesday.

Republicans are not ready to send a "blank check" to the states, McConnell said. "We all have governors regardless of party who would love to have free money," he said.

McConnell said he sees "no good reason" why laws shouldn't be changed to allow states to enter into bankruptcy proceedings, which they are now unable to do. Such a suggestion is highly unlikely, and governors delivered swift blowback.

New York Gov. Andrew Cuomo, who has warned the state will lose anywhere from $10 billion to $15 billion in revenues during the epidemic, called it "one of the saddest, really dumb comments of all time."

In a radio appearance Wednesday, Cuomo said: "You want to reopen the economy, Mr. McConnell, so everyone gets their job back? But the people you put in charge of reopening, the governors and the states, should declare bankruptcy?"

"To say that it is "free money" to provide funds for cops, firefighters and healthcare workers makes McConnell the Marie Antoinette of the Senate," he tweeted.

.@senatemajldr McConnell’s dismissive remark that States devastated by Coronavirus should go bankrupt rather than get the federal assistance they need and deserve is shameful and indefensible. To say that it is “free money” to provide funds for...

To stay that it is 'free money' to provide funds for cops, firefighters and healthcare worker makes McConnell the Marie Antoinette of the Senate"

New Jersey Gov. Phil Murphy said: "Really? This is the time, in a moment of crisis unlike any our country has faced in at least 100 years, to suggest it's a good thing for states to go bankrupt?"

"Come on, man. That is completely and utterly irresponsible," Murphy continued.

Trump has said he supports including fiscal relief for state and local government in another virus aid package along with infrastructure projects. It's unclear how soon the next bill can advance. There's also the question of when Pelosi and McConnell feel comfortable reopening Capitol Hill, though Trump has signaled he wants discussions to begin as soon as Congress finishes the current legislation.

The Senate is scheduled to return May 4.

Dad of 7 dying of COVID says goodbye in emotional video 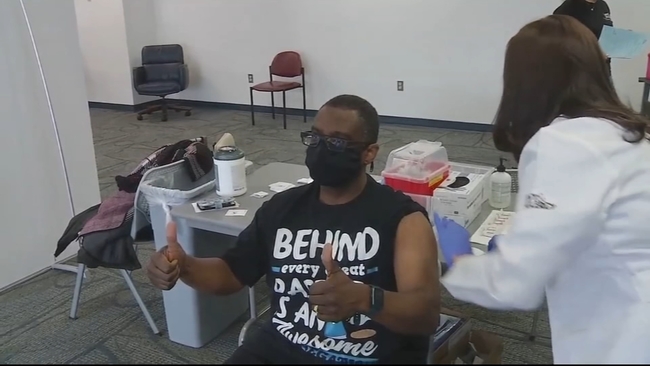 Black clergy in Delaware push to get community vaccinated