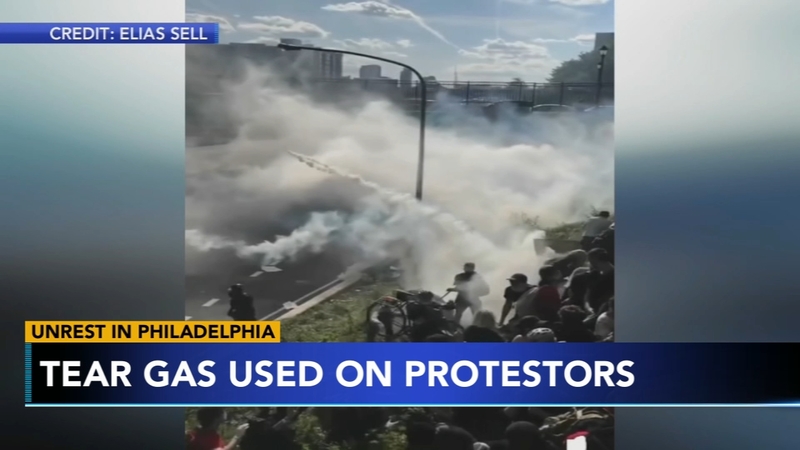 PHILADELPHIA (WPVI) -- Hundreds of people protesting the police treatment of African Americans spilled onto an interstate highway in the heart of Philadelphia on Monday afternoon just before a curfew took effect, leading law enforcement to fire nonlethal bullets and tear gas and halting traffic during the evening rush hour.

Hundreds of people protesting the police treatment of African Americans spilled onto an interstate highway in the heart of Philadelphia on Monday afternoon just before a curfew took effect, leading law enforcement to fire nonlethal bullets and tear gas and halting traffic during the evening rush hour.

Dozens of protesters detained on median after shutting down Vine Street Expressway on June 1, 2020.

Demonstrations continue in Philadelphia for third night as reported by Christie Ileto during Action News at 11 on June 1, 2020.

Members of the National Guard arrived in Philadelphia to offer support.

Looters tried to break into an ATM in North Philadelphia.

On a call with governors Monday before the confrontation on the interstate, President Donald Trump singled out Philadelphia, where as of Monday morning destruction had been on par with that in some other major cities.
"Philadelphia is a mess. Philadelphia, what happened there is horrible. And that was on television. They're breaking into stores and nobody showed up to even stop them," Trump said.