The opening of indoor dining and gyms is delayed until at least August 1.
WPVI
By Annie McCormick and Bob Brooks 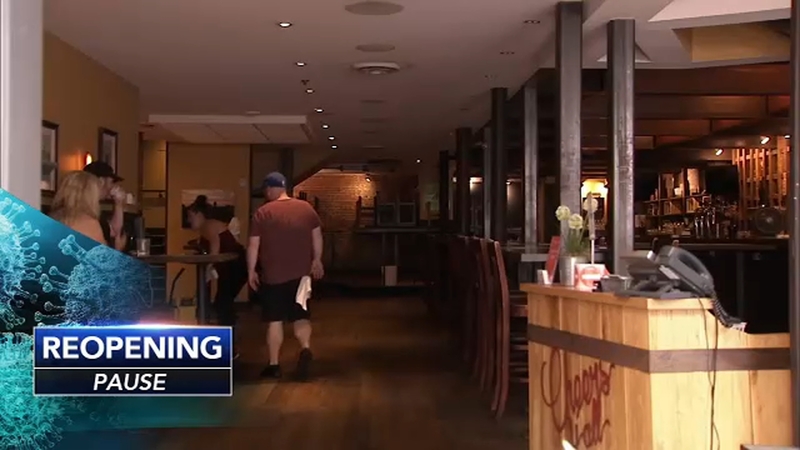 PHILADELPHIA (WPVI) -- Due to the rising number of positive cases of the coronavirus, Philadelphia is pausing some of its reopening plans and will only move to a modified green phase on Friday. The city has also issued a travel advisory for 15 states across the country.

The city health commissioner Dr. Thomas Farely opened his press briefing Tuesday by saying the news was not good as cases of COVID-19 continue to rise nationally and regionally.

Farley said over the past couple of weeks, positive cases have been likely to be younger people. Thirty-four percent of the cases were under age 30 in the past two weeks, as opposed to 20 percent during the entire pandemic.

He said this is linked to social events and travel, especially trips to the Jersey Shore.

The city's daily case counts are no longer going down, Farley said, and Philadelphia will not meet its targets to move fully to green on Friday.

READ MORE: What to know as Philadelphia puts pause on some reopening plans

Therefore, the city is pausing the reopening of indoor dining, as well as gyms and fitness centers, to at least August 1.

For Chris Semick, Warhorse gym in Northern Liberties is his sole income. It's how he supports his wife and newborn baby.

He thought he was going to open up Friday until the city halted reopening plans.

"It's terrifying. It's 100% terrifying, I have no other option," said Semick.

And what's killing him is he believes they can safely reopen.

"We do only like three to four people at a time. It's very easy for us to monitor and contact trace," said Semick.

Just up the street, Maleek Jackson has moved his boxing equipment outside.

"This is what we're doing to survive. It's crazy times, it's like so unreal," said Jackson who runs Maleek Jackson Fitness Boxing Gym.

But he too questions the decision.

"Different counties they're open. We're the last to open. It's sad but can't do anything," Jackson adds.

From a consumer standpoint, a lot of people, like Hassan James, are commuting to Montgomery County gyms.

He just hopes they stay open.

"Please just mask up. Everyone wants to get back to life," said James.

Philadelphia did allow some businesses like barbers and salons to reopen on Friday, June 26.

People returning to Philadelphia from any of these states should self-quarantine for 14 days, Farley said.

On Friday, Philadelphia will be allowing the reopening of some businesses in a modified and restricted green phase.

These businesses and activities include museums and libraries, indoor shopping malls, and small indoor and outdoor gatherings.

Casinos will also be allowed to open during this restricted green phase, but only with very strict requirements - masks are required, six feet of distance between patrons, and absolutely no food, drink, or smoking is allowed indoors.


All businesses and activities must follow the Safe Mode guidance on the City's Reopening with Care website.

Farley added if people can work remotely, they should continue to do so.