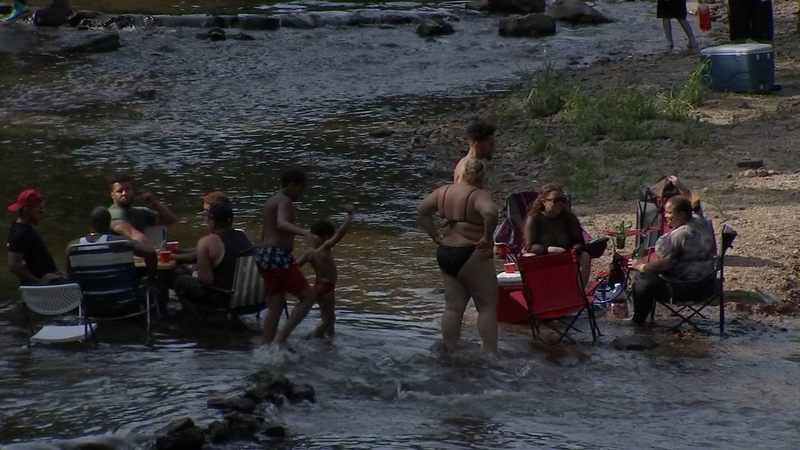 PHILADELPHIA (WPVI) -- Dozens of visitors took over Pennypack Park on Sunday in the Holmesburg section of Philadelphia. Action News captured scores of people splashing and swimming in the creek despite clear signage forbidding it.

"We got to go an hour away, minimum," said Andy Hernandez of Paterson, New Jersey.

Hernandez, like many, traveled from out of town and said it was word of mouth that attracted him and his family to the area this weekend.

Vistors packed Pennypack Park on Sunday in the Holmesburg section of Philadelphia. Action News captured scores of people splashing or swimming in the creek, despite clear signage forbidding it.

"We're just trying to comply with the law at the end of the day. We didn't want to get in trouble," said Hernandez.

Though he may have avoided the law, Philadelphia police were called to the scene after numerous complaints from those that live in the area-- many citing noise, illegal parking, trash and general threat to public health.

"There is bacteria, harmful bacteria and pollutants in the stream. Every time it rains, stormwater trickles down into the creek," said Bill Kenny with the Upper Holmesburg Civic Association.

"They come here to drop their trash, they are very rude, it's just a lot going on," added resident Crystal.

Philadelphia Police spending the afternoon educating those here about the dangers and asking them to cleanup.

They also cited those who were violating the law.

By late afternoon, police ended up shutting down access to the park.

"A lot of people didn't know the rules and regulations of the park," said Lt. Jeff Campbell with the Philadelphia Police Department.

Campbell and community liaison, Officer Elgin Rogers, spent the afternoon educating the groups about the trash and citing them for breaking the law in line with new leadership in the district.