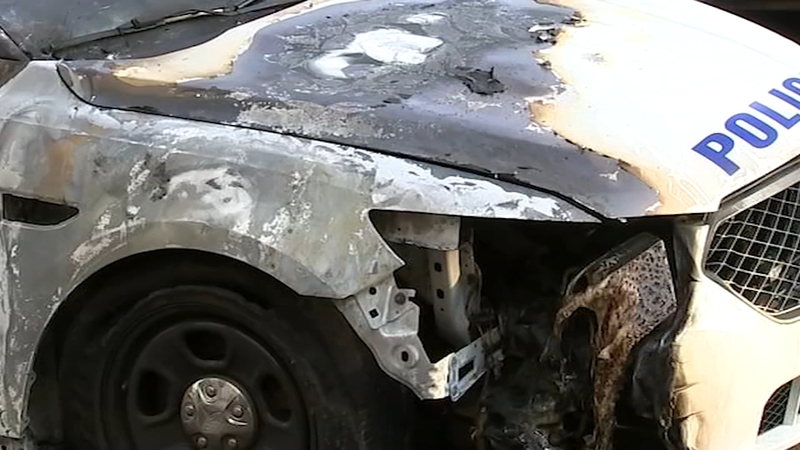 Reports of police car fires started coming in around 2 a.m.

The vehicles were unattended. No one was injured and all were determined arson.

Gwendolyn Bonaparte walked by one of them on her way to work.

Bonaparte exclaimed, "Oh goodness- that's bad. That's real bad. People that help us- come on- why would somebody do that?"

After the fires were reported, police dispatch broadcasted over the air for all officers not to leave their vehicles unattended.

Some districts were returning cars to protected garages

Philadelphia Police Commissioner Danielle Outlaw explained, "Throughout the night we worked very hard to make sure we cover down for the safety and security of our vehicles, and obviously the officers who were assigned to those vehicles."

At 11th and Vine, the vehicle was parked and empty, right near the 6th Police District, when the fire was reported around 1:40 a.m.

Another fire was called in at 7th and Chestnut streets shortly before 2 a.m. This time, a police van was charred near the rear wheel well.

At 2:28 a.m., there was another call for a fire in an unattended vehicle parked near University City District headquarters on Chestnut near 40th Street.

Carleiece Waring was parked in front of that vehicle. Her car wasn't damaged, but she was stunned.

"I mean why- this the police cars- they're supposed to be patrolling the area to make us safe, and then you come outside and you see the police cars on fire- it makes no sense," Waring said.

Then at 2:29 a.m., a fourth fire was reported in a vehicle parked outside the 16th Police District at 40th and Lancaster. Police said a Molotov cocktail was placed on the hood.

In the final two incidents, police have surveillance footage, describing the suspect as a white male with a flannel shirt and backpack, on a white Cannondale bicycle.

"We get up to serve complete strangers-folks that we don't even know, and to damage the tools- one of the tools that we have available to us to not only keep us safe, but in order to allow us to do our job- it's a real slap in the face," Commissioner Outlaw said.
Report a correction or typo
Related topics:
philadelphiacar firephiladelphia police
Copyright © 2021 WPVI-TV. All Rights Reserved.
TOP STORIES
'The View' hosts test positive for COVID moments before VP interview
Investigation: Man accused of bilking victims in rent-to-own scheme
Biden urges booster shots following CDC endorsement
Gritty rides motorcycle on I-95 & around Philly for 3rd birthday
Slain woman Gabby Petito's boyfriend indicted for bank fraud
Authorities identify gunman who shot 15, killing 1, at TN Kroger
Newborn baby found dead in trash bag in Delaware County
Show More
AccuWeather: Humidity Breaks, Feeling Like Fall
Philly schools announce schedule changes for some upcoming Fridays
Driver among several killed in Philly shootings Thursday night
$50K grant to help Atlantic City plan new use of Trump Plaza site
New Jersey weighs expanding flood buyback program after Ida
More TOP STORIES News