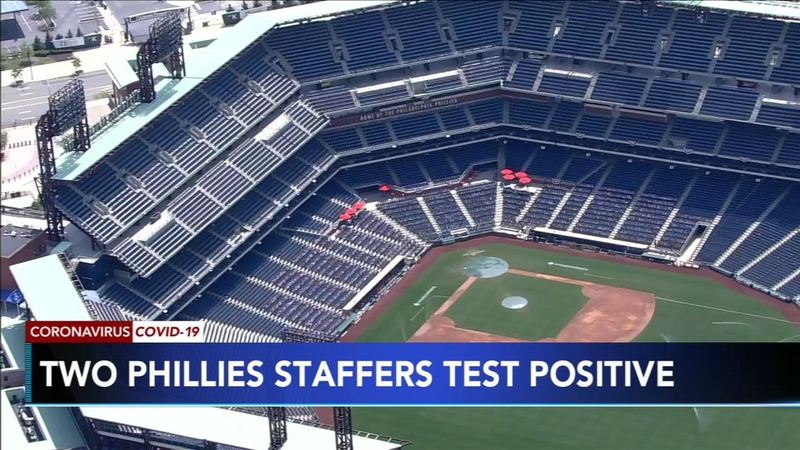 PHILADELPHIA (WPVI) -- The Philadelphia Phillies say there are no new positive results in their latest COVID-19 testing as another clubhouse is reportedly dealing with the virus.

The Phillies say there were no positive results from Thursday's tests. A member of the coaching staff and a member of the home clubhouse tested positive for COVID-19 from Wednesday's testing.

Across the league, the coronavirus pandemic is reportedly impacting two more teams.

As @CraigMish said, two Cardinals players have tested positive for COVID-19. Questions now abound. How soon will the Cardinals play again? Will the Twins, who last played the Cardinals on Wednesday, postpone their game tonight against Cleveland? Two positives, ?s for four teams.

The weekend series between the Philadelphia Phillies and the Toronto Blue Jays was postponed the two staffers tested positive.

"Our plans right now are to stay put and let MLB work through whatever they're working through," Blue Jays manager Charlie Montoyo said before his club played the last of four games in Washington. "We're not going to Philadelphia. Those games have been postponed."

🚨BREAKING: Phillies have 2 staff members that tested positive for COVID-19

All activity at Citizens Bank Park has been cancelled today and until further notice.@6abc #Phillies pic.twitter.com/MLkHlb4KOX

The weekend series against the Blue Jays would have included a doubleheader on Saturday.

A source told ESPN's Jesse Rogers on Friday the Miami Marlins, after an 18th player tested positive for COVID-19 on Friday, are getting multiple sleeper buses to take infected players and coaches back to Miami.

All games for the team have been postponed through Sunday by Major League Baseball.

While the players and coaches with coronavirus are being transported to Miami, the rest of the team will remain in Philadelphia, where they played last weekend and have been undergoing daily testing.

The prospect of the team's season restarting Tuesday at home against the Phillies remains in question.