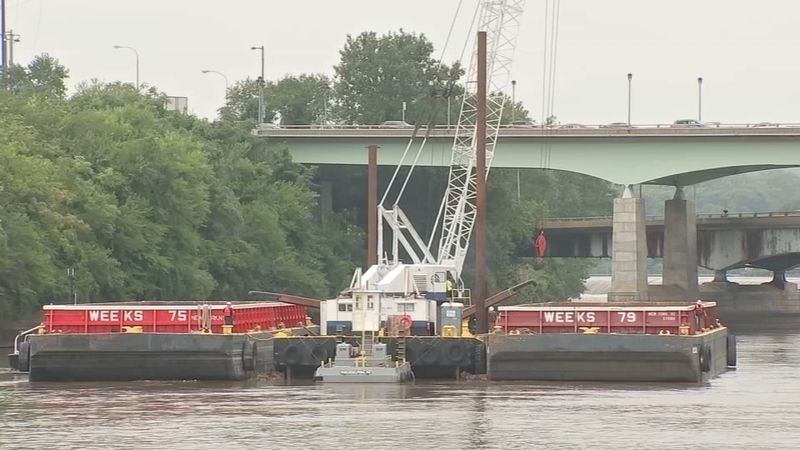 I-676 reopens after barges removed from under bridge

PHILADELPHIA (WPVI) -- The Vine Street Expressway in Philadelphia has reopened after three barges broke loose on the flooded Schuylkill River during Tropical Storm Isaias and got lodged underneath the I-676 bridge.

One tugboat was used to remove the barges around 11:30 a.m. Thursday. The barges were being taken to the Spring Garden Bridge where they will be secured.

Barge is on the move! It’s been dislodged from I-676 bridge & is heading to it’s now docking spot near the Spring Garden Bridge. Traffic on bridge should reopen shortly. @6abc pic.twitter.com/22zzh16I6X

PennDOT said both sides of I-676 reopened Thursday afternoon after being shut down for two days.

The barges were being used by PennDOT to dredge portions of the Schuylkill River above the Fairmount Dam. They were being kept between the Spring Garden Bridge and 676 Bridge.

"The barge has been here since the spring, it's part of the dredging project and it was pushed down during the storm," said Steve Rochette, Spokesman for the US Army Corps of Engineers.

SLOW & STEADY: Army Corps of Engineers is making progress moving the barges that were lodged against the I-676 bridge during #Isaias @6abc pic.twitter.com/dLHUpfOO8G

Around 5 p.m. Tuesday, the barges broke loose from their moorings when the Schuylkill River flooded from Isaias and hit the beam of the bridge.

PennDOT shut down traffic on I-676 from Broad Street through the interchanges while they investigated.

A representative from the Army Corps of Engineers explained they had to wait for the swollen Schuylkill River to recede for the three tugboats to arrive at the scene and pull the barges back in place.

"It's gonna be secured by its spuds and anchored down. Spuds are the long poles that you see, there will be one added and it will be anchored of course as well," said Rochette.

PennDOT bridge engineers used special equipment to get a better view of potential damage underneath the bridge on Wednesday.

Interstate 676 in Philadelphia is shut down after a barge broke loose on the flooded Schuylkill River during Tropical Storm Isaias on Tuesday.

During a city press conference, a PennDOT representative said there was no significant damage underneath the I-676 bridge.