Gov. Wolf's administration recommends, but does not order, postponement of K-12 youth sports in Pennsylvania until 2021 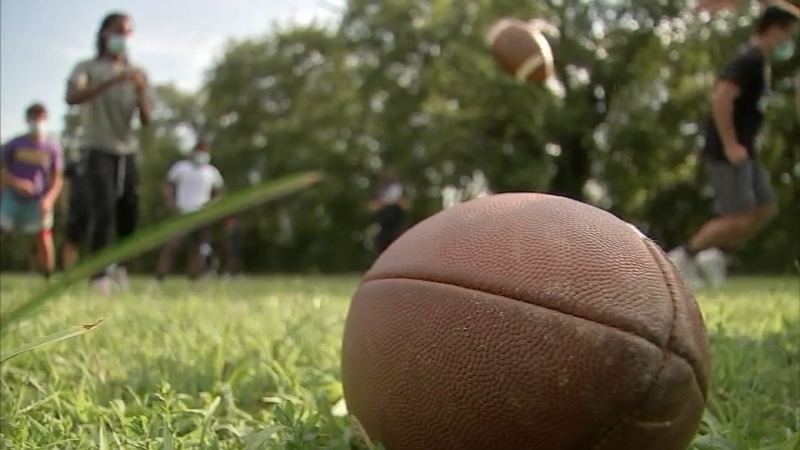 Gov. Tom Wolf made the comment at a news conference on a separate subject, following up with a news release that described it as a necessary precaution to prevent the spread of COVID-19.

"The administration is providing this strong recommendation and not an order or mandate," Wolf's news release said. "As with deciding whether students should return to in-person classes, remote learning or a blend of the two this fall, school administrators and locally elected school boards should make decisions on sports."

The recommendation from Wolf's Health and Education departments applies to individual and team sports, both school-related and other recreational leagues, and to games and scrimmages. It does not apply to college and pro sports.

Gov. Tom Wolf's administration is recommending all Kindergarten through 12th grade school and recreational sports should be postponed until at least Jan. 1, 2021.

"The guidance is that we ought to avoid any congregate settings. And that means anything that brings people together is going to help that virus get us," Wolf, a Democrat, said Thursday morning in Harrisburg.

"And we ought to do everything we can to defeat that virus. So any time we get together for any reason, that's a problem, because it makes it easier for that virus to spread. So the guidance from us, recommendation, is that we don't do any sports until January first," he said.

The Roman Catholic High School football team was out doing their drills late Thursday in Center City. Coaches are pushing them, trying to motivate them for what they hope will be one of their best seasons.

Head coach Rick Prete says they've been strictly following all the COVID-19 guidelines but then heard Wolf strongly recommend they postponed the season until January 1.

"As far as, yeah you're following the guidelines but now we're starting to figure out, starting to come to the conclusion, what is it for if we're not gonna even get the opportunity to play," said Coach Prete.

Athletes are frustrated, especially those in their senior year counting on earning a scholarship to go to college.

"I haven't had any offers yet and this is my season to prove myself and I really need this really badly," said senior Shemaf Ellis.

"It's important because we have guys out here that need opportunities to get scholarships, so there's a lot riding on this season," added senior Luke Duska.

A spokesman for Republicans in the state House, Jason Gottesman, called it an "unjustified and inconsistent decision" that raised questions about student-athletes seeking scholarships, and about the process that led to Wolf's recommendation.

Some schools have already canceled fall sports, and leagues have pushed back start dates.

The Health Department guidance said statewide limits on the number of people who can gather together during the pandemic still apply - 25 people indoors and 250 outdoors, under the current "green" phase of Wolf's reopening scheme.

"During the yellow and green phases of reopening, sports-related activities at the PK-12 level are limited to student athletes, coaches, officials and staff only. The addition of visitors and spectators will be contingent upon future health conditions within the state and local communities," the July 15 Health directive states.

The PIAA said in a statement, in part, "we are tremendously disappointed in this decision. Our member schools have worked diligently to develop health and safety plans to allow students the safe return to intersholastic athletics."

While the practices have been over Zoom, Coach Devon Johnson at Imhotep Institute Charter High School has been doing everything he can to keep his football team in shape.

"They're around positive male influences, you know, some of them might not have that at home...it gives the kids structure," he said.

He says he's known the fall football season would be delayed, but he's been hoping to play in the spring.

"We just try to be that positive light for them and let them know there is hope out there for them to have a season," he said.

It came as a shock, however, when Governor Wolf made the announcement Thursday morning.

"The recommendation is we don't do any sports until January 1st," said the governor during his daily press briefing.

Johnson is not alone in his surprise.

"I say it's a choice, we pay to play, I say let the children, their parents, their coaches decide if there's a sports season," said Becky Hogan, who's son plays high school football in Upper Moreland. "Just in general they need an outlet. I just feel like if they have all this free time, they're going to end up getting into trouble in some way."

The PIAA says it will meet Friday to further discuss a plan.