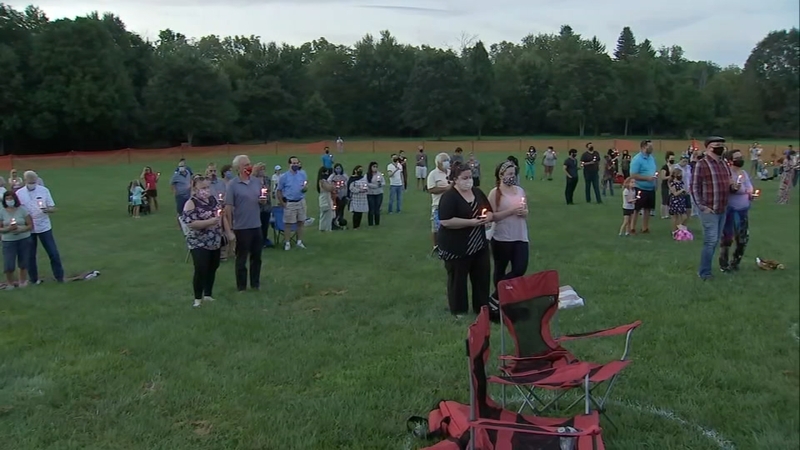 A vigil was held to honor 5-year-old Eliza Talal at Fischer Park in Harleysville, Pa

HARLEYSVILLE, Pennsylvania (WPVI) -- You typically don't hear songs from "Frozen" at a vigil for someone who's passed away.

But on Friday, at Fischer Park in Harleysville, Montgomery County Disney tunes were played to honor 5-year-old Eliza Talal which were her favorite songs.

As they played, her mother wept.

"I will miss her so much and life won't be the same without her," said Yusra Talal.
Before the vigil, Talal and her husband found the strength to speak with Action News. They thanked their neighbors for the ongoing support through this nightmare.

Eliza's father, Talal Hussein, said, "All the support and love from the community, that really encouraged us to be here."

The tragic death of their daughter happened as Tropical Storm Isaias flooded the area.

Officials say Eliza, who had special needs, slipped out of the house.

She was found the next morning, August 5, near a tree in the park.

A 5-year-old girl from Montgomery County who went missing as Tropical Storm Isaias hit the area on Tuesday has been found dead.

Neighbor Mayank Amin was one of the hundreds of people around the area who helped search for Eliza.

Amin said the 5-year-old made the community stronger.

"Even the chief of police was saying this was the first time that the community had actually come together like this," Amin said.

Michael Brothen, who helped set the vigil up agrees.

"When the word came out about Eliza, I just fell apart on the porch," said Brothen. "I had a flashback when we are on vacation in Disney and my oldest wandered off."

Though their daughter is gone, her parents feel as if they've gained everyone that was in attendance at the vigil as new family.

Though nothing will ever replace their little girl.