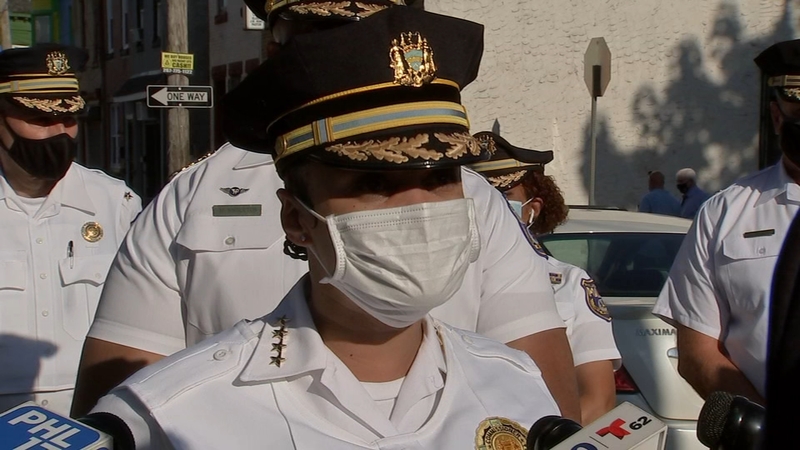 PHILADELPHIA (WPVI) -- Police Commissioner Danielle Outlaw is asking the community to act with a sense of urgency and is challenging leaders to push for changes as homicide rates surge in Philadelphia.

Outlaw spoke at a crime scene Tuesday where she discussed several challenges she believes the community is facing with reducing violent crimes.

"This isn't OK. The sooner we get our hands wrapped around this, and sooner that folks understand that we have to work together to get this done, the better off we'll be," Outlaw said.

The commissioner said a lot of the ongoing issues stem from poverty, a lack of access to resources and jobs, but she also stressed the need for harsher and stricter punishment for repeat offenders.

"This isn't the first time that they shot someone. They've been arrested and they've been let out again and they have a violent history. There has to be consequences," Outlaw said.

She added that it's important something is done when police make arrests and obtain guns.

Gun violence in Philadelphia is surging at a record pace as police investigate more shootings on Tuesday night.

Outlaw is challenging federal prosecutors, the district attorney, and the entire community to push for harsher penalties for those who need them

"It's us, it's the DA, it's also the U.S. Attorney's office, but it's also everything in-between the criminal justice system to ensure that we are aligned, we're in sync," Outlaw said.

"When we're asking for enhanced bail or enhanced prosecution, that we're all on the same page to know the backstory behind that, so that we have situational awareness as to why the police department is making these asks," Outlaw said.

The commissioner continues to echo the message of other city leaders who are pushing for stricter gun laws, but noted those changes are up to state lawmakers who can create new legislation.

The commissioner said the changes are needed because a lot of criminals do not care about the consequences. They're shooting at police and opening fire on groups of people in broad daylight, like what happened in Strawberry Mansion Tuesday when five people were shot.