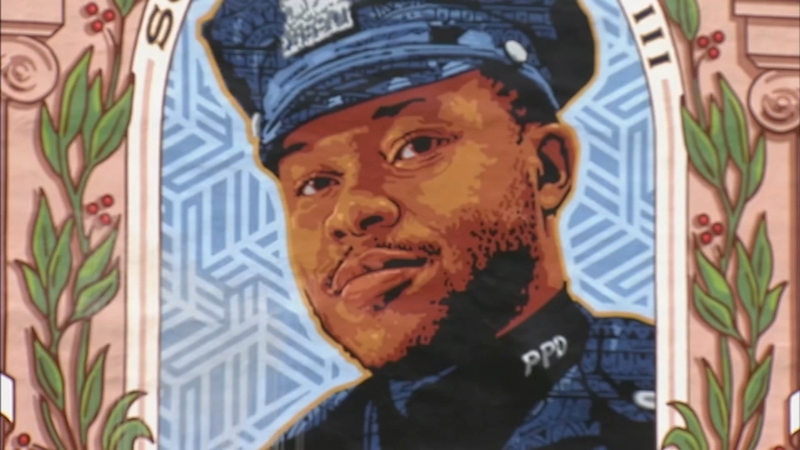 PHILADELPHIA (WPVI) -- The search is on for the person who vandalized a mural in West Philadelphia that honors a slain Philadelphia police sergeant.

The mural depicting Sgt. Robert Wilson III, located on the 6000 block of Baltimore Avenue, was defaced with graffiti on Sunday.

Sgt. Wilson was killed at a North Philadelphia GameStop store on March 5, 2015. Wilson went in to buy his young son a gift when he was gunned down as he tried to stop a robbery. His brave actions that day saved the lives of other customers.

"The fact that someone lays their life down for strangers and himself and children, and someone comes out to do this, it just makes you sick," said Officer Damien Stevenson, Wilson's former partner. "He stepped to one side of the room while everyone went to the other side safely and literally gave his life."

In addition to the defaced mural, a glass bottle with a white substance inside was also thrown at the painting.

David McShane, who created the mural with Mural Arts Philadelphia said, "I only found out an hour ago. I put supplies together hopped in my car and came over."

Sgt Robert Wilson III ‘s West Phila mural vandalized. The artist who painted the mural heard about the vandalism & within an hour came here to clean it. @6abc pic.twitter.com/bUzSN5H08l

Late Sunday night, Wilson's sister released a statement condemning the act saying, "We know who Robbie was and what he stood for. This not the way to make a change. All it's doing is causing more of a divide."

FOP Lodge 5 President John McNesby announced an $11,000 reward for any information that leads to an arrest.

"I'm saddened and angered that vandals would deface the mural of one of our beloved heroes, Sgt. Robert Wilson III. Our thoughts and prayers are with the Wilson family on this sad day. Wilson served our great city with passion and compassion and is sorely missed by his friends and colleagues in the Philadelphia police department. Rest easy, Robb," said McNesby in a statement.

Police Commissioner Danielle Outlaw took to Twitter condemning the vandalism, saying, "To the coward who did this: You didn't earn any extra "woke-points". You're not brave. You're not a revolutionary. You're certainly no hero. And despite all of your failings, heroes like Rob will still answer your calls for help."

To the coward who did this: You didn't earn any extra "woke-points". You're not brave. You're not a revolutionary. You're certainly no hero. And despite all of your failings, heroes like Rob will still answer your calls for help. My full statement below: pic.twitter.com/jnTkIGdAPq