As new school year begins in Philadelphia, some scramble to get computers 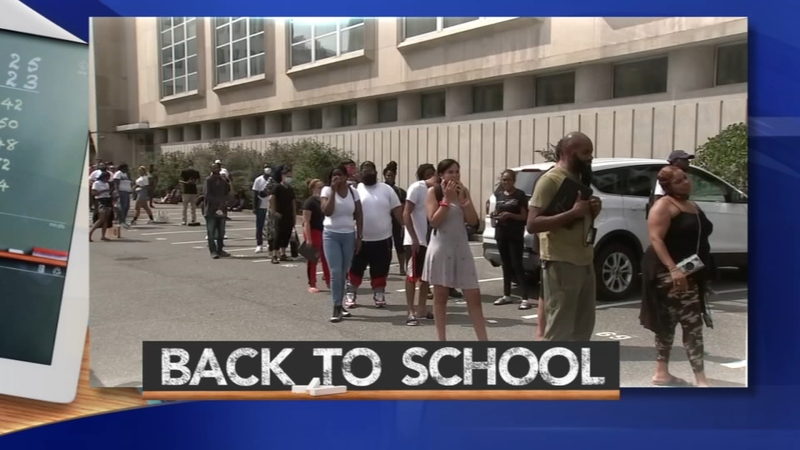 As new school year begins in Philly, some scramble to get computers

PHILADELPHIA (WPVI) -- As the new school year began on Wednesday, hundreds of parents and students were at Philadelphia School District Headquarters to grab Chromebooks for virtual learning.

Some needed to get the computers for the start of classes, while others needed repairs.

"I guess as parents we running a little late, we could've come sooner, you know," said parent Sharday Wallace.

"It took a while to get in there, but once we got in there they handled things professionally and I am satisfied," said parent Kilolo Hashim.

Students in the School District of Philadelphia are starting the school year on Wednesday, but they won't be in the classroom.

District officials say students and parents were notified for weeks to grab their virtual essentials.

But even some people who acted early still found it difficult to log in for the school day.

"As you can imagine with 130,000 students logging in at the same time there have been some delays, and we are working to expand our servers and make any changes to speed up the process for people moving forward," said school district spokeswoman Monica Lewis.

RELATED: Send us your 2020 Back to School photos!

As the kinks are straightened out, city and state leaders called for more federal funding at a press conference at Lowell Elementary.
It was part of a National Day of Action demanding safer schools.

"We need resources to make sure that this next generation is not duly affected for the next 20-40 years. We need education equity," said Bishop Dwayne Royster, the Executive Director of POWER.

"We are doing our best that we can to put our kids on a path to success, but let me be clear that the health and safety of students and school staff are not negotiable. Nothing can replace the benefits of in-person instruction which is a goal we are working towards," said Mayor Jim Kenney.

RELATED: More Back to School Coverage at 6abc.com/BackToSchool

District officials tell Action News the technological support center will be open daily during the week for the foreseeable future to make sure parents and students can get computers and internet problems worked out. That said, they have to keep the hours of 9 am - 2 pm, so they urge people to show up early.

For students who still need internet service, or encounter problems with their Chromebooks, the School District of Philadelphia says to dial 215-400-4444.
NEED A CHROMEBOOK?

The district's resource guide for obtaining a Chromebook is here

For students who still need internet service, or encounter problems with their Chromebooks, the School District of Philadelphia says to dial 215-400-4444.

The School District of Philadelphia has compiled more resources for those needing internet, including locations of free wifi hotspots
START TIMES

To see what time your school starts click here

Starting September 3rd, the district is offering grab-and-go meals at several locations throughout the city. They must be picked up by parents/guardians from 9 am until noon on Thursdays.